Four trends changing the definition of luxury - Marketing Week. The partnership between tech giant Apple and fashion powerhouse Hermès on a special-edition Apple Watch is a clear indication that the luxury market is evolving. 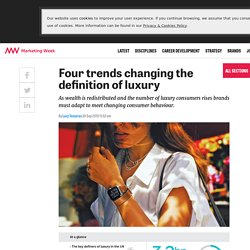 The association helps Hermès remain at the cutting edge of luxury but perhaps more significantly, according to Marketing Week columnist Mark Ritson, it is a strong signal that Apple now sees itself as luxury brand. “Look at Apple’s price point. Look at their visual merchandising. Look at their creative directors. Look at their executive team. The limited edition Hermès watch will most likely sell out immediately when it goes on sale on Monday, but Ritson suggests the long-term benefit of the association will be far more valuable for Apple, as the deal has the ability to “alter and improve brand equity as part of the process”.

Demographic Disruption & the Luxury Drought: How to ‘Make Rain’ - The Robin Report. In a recent talk at the Hackers on the Runway conference in Paris, marketer-extraordinaire Seth Godin, asked, “Is Digital the End of Luxury Brands?” 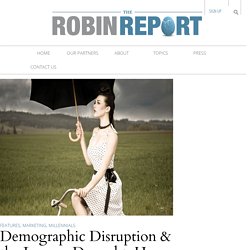 Millennials: The Me Me Me Generation. How Millennials Are Changing the Face of Marketing Forever. The conventional framework that most companies have used to approach marketing is often depicted as a funnel, with the company at one end and the customer who has made a purchase at the other. 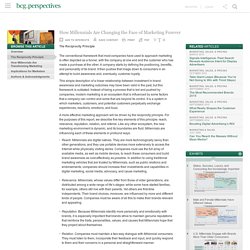 A company starts by defining the positioning, benefits, and personality of its brand. It then pushes that image down to consumers in an attempt to build awareness and, eventually, customer loyalty. This simple description of a linear relationship between investment in brand awareness and marketing outcomes may have been valid in the past, but this framework is outdated. Instead of being a process that is led and pushed by companies, modern marketing is an ecosystem that is influenced by some factors that a company can control and some that are beyond its control.

It is a system in which marketers, customers, and potential customers perpetually exchange experiences, reactions, emotions, and buzz. FULLTEXT01. Millennials & Their Luxury Aspirations. The consumer market is poised to experience the biggest generational shift in wealth and affluence since the Baby Boomers emerged as the core target market. 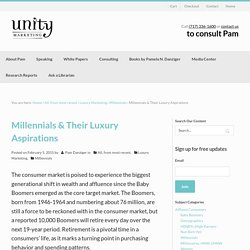 The Boomers, born from 1946-1964 and numbering about 76 million, are still a force to be reckoned with in the consumer market, but a reported 10,000 Boomers will retire every day over the next 19-year period. Retirement is a pivotal time in a consumers’ life, as it marks a turning point in purchasing behavior and spending patterns. Millennials Infographic. Millennials: Driving a New Meaning of Luxury - Univision. What’s the Trend: A shift in the meaning of luxury away from materialism and exclusive, designer products towards a premium on lifestyle and experiences, with a strong push coming from the millennial generation. 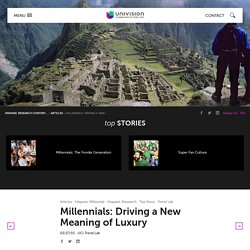 What’s New: Traditionally, luxury referred to something enjoyed by certain people and not others. Luxury was associated with privilege, exclusivity and nonattainability.1 Now this definition is being redefined. Flash sales from online companies like Gilt are making luxury items more accessible and blurring lines of previously unattainable products. People also feel better when they purchase high-quality goods at a lower price. Why it Matters: Much of this shift to experiences over things can be attributed to a search for authenticity. 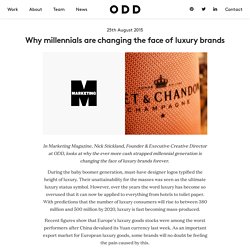 During the baby boomer generation, must-have designer logos typified the height of luxury. Their unattainability for the masses was seen as the ultimate luxury status symbol. However, over the years the word luxury has become so overused that it can now be applied to everything from hotels to toilet paper. With predictions that the number of luxury consumers will rise to between 380 million and 500 million by 2020, luxury is fast becoming mass-produced.

Recent figures show that Europe’s luxury goods stocks were among the worst performers after China devalued its Yuan currency last week. Luxury industry facing the Millennials opportunity - Upfluence. [Estimated read time: 5 minutes] One of the biggest buzz topics for marketers over the last 12 months would have to be the emergence of ‘’Millennials’’ consumer power. 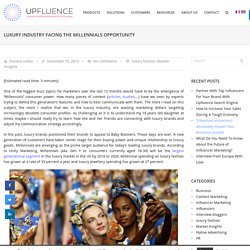 How many pieces of content (articles, studies,...) have we seen by experts trying to define this generation’s features and how to best communicate with them. The more I read on this subject, the more I realize that we, in the luxury industry, are wasting marketing dollars targeting increasingly obsolete consumer profiles. As challenging as it is to understand my 18 years old daughter at times, maybe I should really try to learn how she and her friends are connecting with luxury brands and adjust my communication strategy accordingly.

The changing definition of luxury brands. This story originally appeared on Glossy, Digiday’s sister site about all things fashion, luxury and tech. 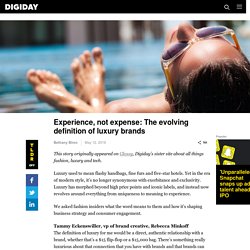 Luxury used to mean flashy handbags, fine furs and five-star hotels. Yet in the era of modern style, it’s no longer synonymous with exorbitance and exclusivity. Luxury has morphed beyond high price points and iconic labels, and instead now revolves around everything from uniqueness to meaning to experience. We asked fashion insiders what the word means to them and how it’s shaping business strategy and consumer engagement. The Case For Winning Over Affluent Millennials. The lucrative affluent millennials set is a coveted target market – but how can luxury brands ensure they effectively capture their attention and brand loyalty? 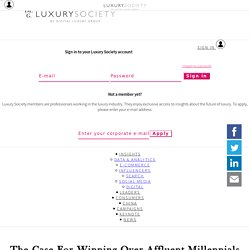 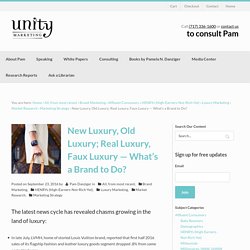 That Ralph Lauren brand has lost its luxe is no news to me, after a recent shopping experience. I ordered an empire waist dress from the company, which was delivered without a side seam zipper. Admittedly, it wasn’t a dress from its high-end range, but it wasn’t cheap either and I ordered it online, so I wasn’t aware this essential detail was missing. The Rich Don't Drive the Luxury Sector. LONDON, United Kingdom — If luxury spending was indeed driven by the rich, the luxury industry would be a niche sector serving a fortunate few, rather than a dynamic, global business selling to a consumer market measured in millions.

10 New Findings About The Millennial Consumer. Companies are fiercely competing for millennial mindshare and it’s only the beginning. There are eighty million millennials in America alone and they represent about a fourth of the entire population, with $200 billion in annual buying power. They have a lot of influence over older generations and are trendsetters across all industries from fashion to food. Companies have been struggling connecting with this generation because many of the traditional methods of advertising have proven ineffective at capturing their attention. Furthermore, many companies believe in certain myths about millennials that are just plain inaccurate, including that they aren’t brand loyal.

Why the Ultra Rich Aren't Obsessed with Brands Anymore. The spending patterns of the wealthy are shifting, forcing luxury brands to reevaluate their marketing tactics. Why the urgency? “According to the American Affluence Research Council, the wealthiest 10% of U.S. households ‘account for almost half of the consumer spending’ and represent about one-third of total GDP,” says a white paper from Ad Age Insights titled “The New Wave of Affluence.” If the marketing campaigns of luxury brands aren’t in sync with what elite consumers want, brands could sustain massive losses. The Psychology Behind Why People Buy Luxury Goods. Buying a luxury handbag these days seems to be no more uncommon than purchasing a pair of shoes at Target Corp. Luxury Daily. A new report by TaxSlayer dispels the myths that millennial consumers are credit card happy and inclined to put themselves in debt to shop for the holidays.

Marketers are seemingly obsessed with the elusive millennial consumer, those born between 1980 and 2000, but TaxSlayer’s survey sheds new light on how this demographic views finances and spending. As it turns out, millennials are more often “frugal Santa(s)” than “financially irresponsible” consumers during the holiday season. Festivities and frugalityDuring its study, TaxSlayer surveyed 500 millennial consumers about their holiday spending habits and plans.

The millennial demographic is often accused of opening credit lines at an alarming rate to afford high-priced items. Prada seeks younger customers in bid for growth. Image copyright AP Italian luxury fashion group Prada has predicted a return to growth as it seeks to connect with younger customers through online sales and flexible pricing. First half profits fell 25% to €330m (£282m) due partly to falling demand in China and Italy.