Why Use Angular Platform For Your Next Application Development Project

Get secure and robust application development with Angular. Learn more about Angular to build high-quality applications with below-curated links.

When And Why Angular Is The Best Choice For You  Angular is one of the most popular open-source front-end frameworks available to developers. 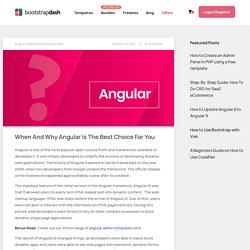 It was initially developed to simplify the process of developing dynamic web applications. The history of Angular framework can be traced back to the year 2009, when two developers from Google created the framework. The official release of the framework happened approximately a year after its creation. The standout feature of the initial version of the Angular framework, AngularJS was that it allowed users to easily turn HTML-based text into dynamic content. The web markup language, HTML was static before the arrival of AngularJS. The launch of AngularJS changed things, as developers were able to easily build dynamic apps and users were able to see web pages with elements, dynamic forms, and more. Angular For Beginners Guide: Why Angular? The Top Benefits. Note: This post is part of the ongoing Angular for Beginners series, here is the complete series: Why Angular? 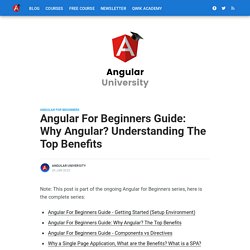 When setting up your initial Angular development environment using the Angular CLI, you will realize how much the CLI has now become essential. This is because we need so much more setup today when compared to what we had before - and this is the case not only for Angular but also for any other equivalent ecosystem. A couple of key questions In this new world of module loaders, advanced build systems that we no longer set up ourselves from scratch, and where everything is transpiled down to plain ES5 Javascript from higher level languages, it would not be surprising if at a given point you would ask yourself:

Why you should choose Angular for your next front-end project. I wasn’t originally a front-end dev, I usually do a lot of back-end/API work with C#, Go, Node, or Python. 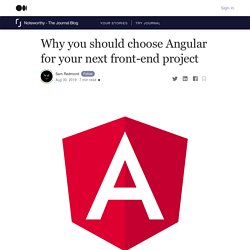 A few years back I was thrown into a full-stack role when I moved to a new company. I was tasked with creating an internal-facing solution that had user management, IM capability, note-taking/sharing capabilities, and a whole bunch of other stuff. This was really my first big introduction to front-end development, I had done some front-end stuff here and there, but nothing this extensive. At the time I had AngularJS at my disposal, which threw me into the Angular world head-first. I can still remember my excitement around the new Angular release (Angular 2), and it hasn’t faded much since. I am happy to say that I have been working with Angular since it’s inception in 2016, and I am really glad I chose this framework. If you’re new to front-end development the number of frameworks can be overwhelming.

The CLI has another added benefit, it is very opinionated. Incremental DOM. Reasons Enterprises Should Choose Angular in 2021. Productive Collaboration Rishabh Software houses the most enthusiastic Angular developers and consulting experts who team up for seamless project execution with clear communication to take the AngularJS web application development to the next level. 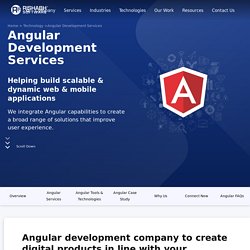 Angular framework has been showered upon intense recognition due to its features of eliminating unnecessary coding and making apps that are faster as well as lighter. 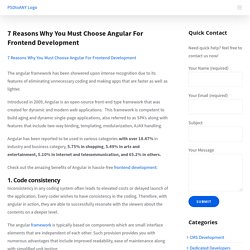 Introduced in 2009, Angular is an open-source front end type framework that was created for dynamic and modern web applications. This framework is competent to build aging and dynamic single-page applications, also referred to as SPA’s along with features that include two-way binding, templating, modularization, AJAX handling. Angular has been reported to be used in various categories with over 18.47% in industry and business category, 5.75% in shopping, 5.49% in arts and entertainment, 5.10% in internet and telecommunication and 65.2% in others.

Check out the amazing benefits of Angular in hassle-free frontend development: 1. Inconsistency in any coding system often leads to elevated costs or delayed launch of the application. 2. 3. 4.