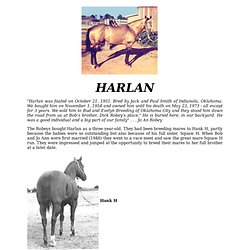 Bred by Jack and Paul Smith of Indianola, Oklahoma. We bought him on November 1, 1954 and owned him until his death on May 23, 1973 - all except for 3 years. We sold him to Bud and Evelyn Breeding of Oklahoma City and they stood him down the road from us at Bob’s brother, Dick Robey's place. " He is buried here, in our backyard. He was a good individual and a big part of our family" . . .

The Robeys bought Harlan as a three year-old. Hank H Bob and Jo An Robey bred eight outside mares to Harlan the first year they stood him at stud. Jo An tells a good story about how quite a few of Harlan’s foals came to be located in the state of Alabama. AQHA1956a. The Invester. Home/articles/the-invester/Working Lines - The Invester.pdf. The Invester : Pleasure Stallions AQHA. Hard Twist Quarter Horse Information. Foundation Quarter Horses - Foundation Paint Horses - Foundation Stock Horse Stories. Home4222222223 - quarterhorselegends. 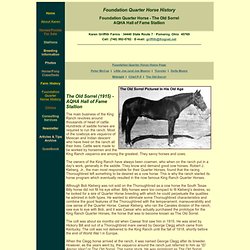 Hundreds of saddle horses are required to run the ranch. Most of the cowboys are vaqueros of Mexican and Indian descent who have lived on the ranch all their lives. Cattle were made to be worked by horsemen and the King Ranch vaqueros are among the greatest. They savvy horses and cows. Painthorselegends. Last update: January 27, 2009 This website is dedicated to the history and ancestors of the American Paint Horse. 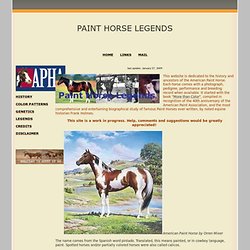 Each horse comes with a photograph, pedigree, performance and breeding record when available. It started with the book "More than Color", compiled in recognition of the 40th anniversary of the American Paint Association, and the most comprehensive and entertaining biographical study of famous Paint Horses ever written, by noted equine historian Frank Holmes. This site is a work in progress. Help, comments and suggestions would be greatly appreciated! American Paint Horse by Orren Mixer The name comes from the Spanish word pintado. 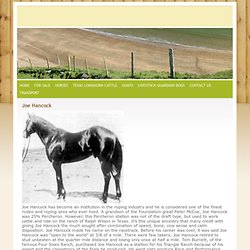 Blue Boy had a great disposition and confirmation.

Poco Bueno. Zantanon. Get to know one of AQHA’s founding sires. 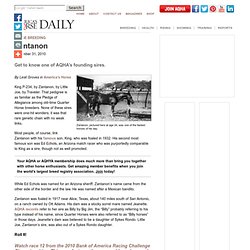 Zantanon, pictured here at age 24, was one of the fastest horses of his day. By Lesli Groves in America’s Horse King P-234, by Zantanon, by Little Joe, by Traveler. That pedigree is as familiar as the Pledge of Allegiance among old-time Quarter Horse breeders. None of these sires were one-hit wonders; it was that rare genetic chain with no weak links. WAGON WHEEL RANCH Quarter Horses - READ ABOUT THE LEGENDS. Byrne James and his wife were driving down a street in Laredo, Texas, one day in the early 1930's when they saw a yearling colt they had to own. 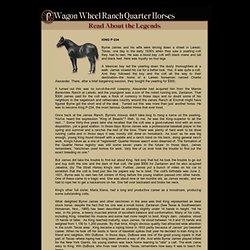 He was a blood bay colt with black mane and tail and black feet. Here was royalty on four legs. A Mexican boy led the yearling down the dusty thoroughfare at a walk. James slowed his car for a better look. Dash For Cash. Tanquery Gin. Special Effort. Home6 - quarterhorselegends. History of all horses in North America There have been no true wild horses on the American continent for 10,000 years. 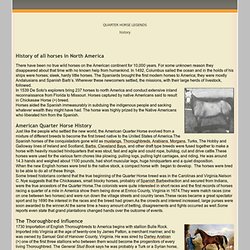 For some unknown reason they disappeared about that time with no known help from humankind. In 1492, Columbus sailed the ocean and in the holds of his ships were horses; sleek, hardy little horses. The Spaniards brought the first modern horses to America; they were mostly Andalusians and Spanish Barb’s. Wherever these newcomers settled, the missions, with their large herds of livestock, followed. In 1539 De Soto's explorers bring 237 horses to north America and conduct extensive inland reconnaissance from Florida to Missouri. Horses aided the Spanish immeasurably in subduing the indigenous people and sacking whatever wealth they might have had. Streakin Six. Quarter Horses. Quarter Horse AQHA Stallions, Zips Chocolate Chip, Myers Horse Farms, Western Pleasure prospects, English Horses for Sale, sires, Chips Hot Chocolate, Rich N Chocolatey. 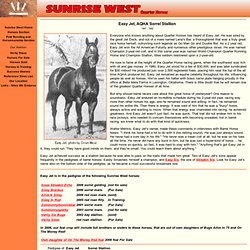 He was sired by the great Jet Deck, and out of a mare named Lena's Bar, a thoroughbred that was a truly great race horse herself, outrunning such legends as Go Man Go and Double Bid. As a 2 year old, Easy Jet won the All American Futurity and numerous other prestigious races. He was named Champion 2-year-old colt, and in this same year was named World Champion Quarter Running Horse and Champion Stallion, titles seldom bestowed upon a 2-year-old. He rose to fame at the height of the Quarter Horse racing game, when the southwest was rich with oil and gas money. But why should barrel racers care about this great horse of yesteryear?

Walter Merrick, Easy Jet's owner, made these comments in interviews with Barrel Horse News: "I think his bone had a lot to do with it (his retiring sound). Easy Jet achieved success as a stallion because he was able to pass on the traits that made him great. DO YOU KNOW THEIR NAMES? Otoe, the $20,000 Yearling – America’s Horse Daily. Otoe might have been the first horse to bring “big money.” 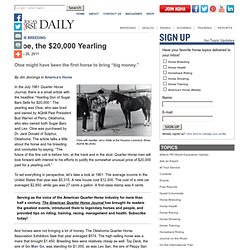 By Jim Jennings in America’s Horse Otoe with handler Jerry Wells at the Houston Livestock Show. AQHA file photo. In the July 1961 Quarter Horse Journal, there is a small article with the headline “Yearling Son of Sugar Bars Sells for $20,000.” Quarter Horse Profiles. Quarter Horse Profiles Janus A horse of Eastern descent imported to America in 1752, Janus was the single most influential stallion in the development of the Quarter Horse. 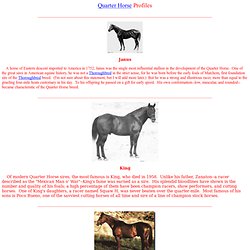 One of the great sires in American equine history, he was not a Thoroughbred in the strict sense, for he was born before the early foals of Matchem, first foundation sire of the Thoroughbred breed. (I'm not sure about this statement, but I will add more later.) American Quarter Horse Association Legendary Stallion Information.