One University's Approach to Innovation: ‘You Have to Go Slow to Go Fast’ Let’s say a college wants to embrace new learning techniques and reinvent how it operates. 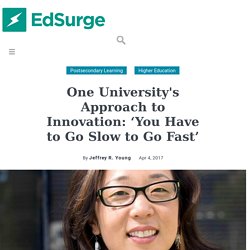 How does the institution go about it? For Southern New Hampshire University, the answer was to create a sandbox—a space where professors and administrators can brainstorm and test new approaches, and where tech startups can pitch their latest tools to college leaders. Since its creation last year, the Sandbox Collaborative (as it is called) has become an “internal consultancy” for the university. The lab has even teamed up with a venture capital firm to invest in early-stage startups. This is actually the university’s second big effort to set up a reinvention lab. Has Your School Reached an Edtech Plateau? Here’s the Key to Moving the Needle. Is It Time To Ban Computers From Classrooms? : 13.7: Cosmos And Culture. Every semester, college instructors face a choice: whether to restrict the use of laptops and other devices in their classrooms or to, instead, let students decide for themselves. 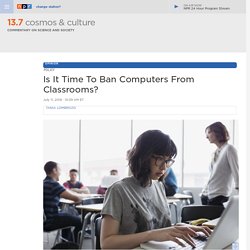 And for classrooms that do allow devices, students face an ongoing set of choices: to take notes electronically or by hand, to check the textbook or the text message, to check Instagram or Twitter. This bounty of choices, and the multitasking that often ensues, may be the very problem that drives some instructors to ban devices altogether. In fact, evidence suggests that computer-based multitasking can reduce student learning, not only for those students using devices but also for their distracted neighbors. Even when computers are used for the praiseworthy purpose of taking class notes, computer-using students tend to do more poorly on later tests than their peers who took notes by hand. For device aficionados, these are dispiriting results.

The authors consider several possibilities. Even Apple (AAPL) is acknowledging that the “iPads in education” fad is coming to an end — Quartz. Why smart kids shouldn’t use laptops in class. Students who use digital devices in class 'perform worse in exams' Allowing students to use computers and the internet in classrooms substantially harms their results, a study has found. 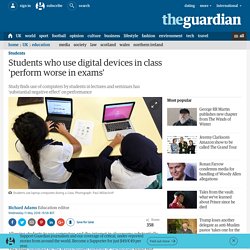 The paper published by the Massachusetts Institute of Technology found that students barred from using laptops or digital devices in lectures and seminars did better in their exams than those allowed to use computers and access the internet. The researchers suggested that removing laptops and iPads from classes was the equivalent of improving the quality of teaching. The study divided 726 undergraduates randomly into three groups in the 2014-15 and 2015-16 academic years. At Second Look, Wizer Looks Like A Fabulous Way Create Virtual Classrooms & Track Student Progress. A couple of months ago, I shared the Wizer site as a one line piece in one of my Web 2.0 weekly “round-ups.” 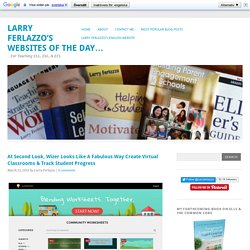 It looked like it had some potential, but it also didn’t seem very intuitive at first glance at figuring out how it worked, and I was pressed for time that week. Then, Richard Byrne wrote a post about it and included a video showing how it worked. I finally got around to watching the video (well, at least its first three minutes — I’ve embedded it below) and then I got it! I subsequently played around on the site, and watched a few minutes Wizer’s own video (also embedded below), and concluded that this is one helluva’ useful site! In some ways, it’s like a somewhat less-sophisticated SAS Curriculum Pathways, which I think is the most useful site on the Web for teachers. I’m definitely adding Wizer to The Best Sites That Students Can Use Independently And Let Teachers Check On Progress. Here are the two “how-to” videos I mentioned earlier: Related.

Teen Girls And Social Media: A Story Of 'Secret Lives' And Misogyny : All Tech Considered. Nancy Jo Sales interviewed more than 200 teenage girls about their social media and Internet habits while researching her book American Girls. 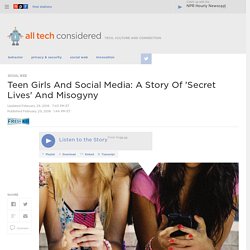 Knopf hide caption toggle caption Knopf Nancy Jo Sales interviewed more than 200 teenage girls about their social media and Internet habits while researching her book American Girls. Knopf. Study In Your PJs? What A High School 'Work From Home Day' Looks Like. One-Third Of Schools Are Using This App You've Never Heard Of : NPR Ed. The founders of Clever met at Harvard. 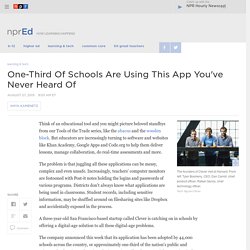 A three-year-old San Francisco-based startup called Clever is catching on in schools by offering a digital-age solution to all these digital-age problems. The company announced this week that its application has been adopted by 44,000 schools across the country, or approximately one-third of the nation's public and private schools.