An Error Occurred Setting Your User Cookie. Digital Financial Inclusion of the Rural Poor in Bangladesh. Considering Bangladesh’s lack of development and a predominantly rural context, it would have been difficult to imagine even a few years ago that an elderly widow living in a remote corner of this impoverished South Asian country could be receiving money from her son living in Dubai sitting right at home or making petty payments through her mobile phone. 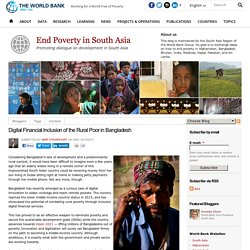 Not any more, though. Bangladesh has recently emerged as a curious case of digital innovation to widen coverage and reach remote pockets. The country reached the lower middle income country status in 2015, and has showcased the potential of combating rural poverty through inclusive digital financial services. Three flawed ideas are hurting international peacebuilding. Members of former rebel groups wait to register at a local police station in Gao, Mali, on Jan. 13, as part of the peace process. 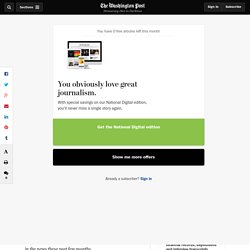 Joint patrols will take place in Gao, Timbuktu and Kidal, among other steps in accomplishing the peace process. (Jane Hahn for The Washington Post) Violence disrupts the lives of some 1.5 billion people worldwide. International interventions such as peacekeeping missions or negotiations aim to bring peace to people affected by violence, but they rarely do so. The inability of United Nations peacekeepers to contain the fighting in the Congo, Mali and South Sudan, or mediators who are unable to broker an end to the Syrian war, are among many examples in the news these past few months.

On bowls of coffee and wooden canoes: The necessity of cultural exchange — Quartz. Adele’s upset win over Beyonce at the 2017 Grammy Awards shocked many music lovers, who saw the outcome as a reflection of the racism endemic to the industry. 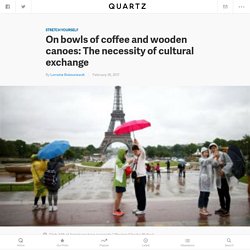 The Academy Awards are unlikely to be much different—at least where Best Picture is concerned. Adele’s surprise Album of the Year win sparked the hashtag #GrammysSoWhite along with a welcome conversation on white privilege. “Simply put, the Grammys have an inclusion problem—or more to the point, an exclusion problem,” Jon Caramanica wrote for the New York Times. Record Number Of Students Going Abroad Despite Anti-Global Rhetoric In Recent Elections. On Flipboard. Deported With A Valid U.S. Visa, Jordanian Says Message Is 'You're Not Welcome' : Parallels. #CuriousGoat: What's A Good Exit Strategy For A Charity : Goats and Soda.

Readers asked: "When a humanitarian group has helped a community become self-sustaining, how can the group create a good 'exit strategy.'" Our sources answered: Create the exit strategy from the get-go. 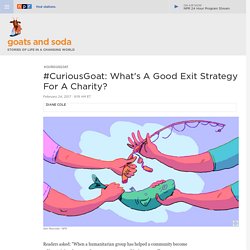 What Is #CuriousGoat? #CuriousGoat is a monthly series from Goats and Soda that asks our audience to share a question on a special topic about global health and development. South African e-learning to reach excluded. By Tom Jackson . 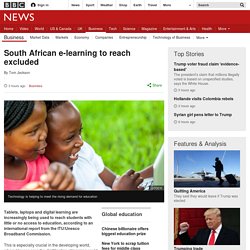 Image copyright iStock Tablets, laptops and digital learning are increasingly being used to reach students with little or no access to education, according to an international report from the ITU/Unesco Broadband Commission. This is especially crucial in the developing world, where Unesco says the digitilisation of learning could be a means of accelerating progress towards the Sustainable Development Goals, such as ensuring access to primary school for all children.

This process is already evident in Africa, which according to Unesco has 30 million primary-age children not attending school, over half the global total. Yet the continent is overcoming challenges surrounding lack of internet access and electricity to become a major player in the e-learning space. According to a recent report from Ambient Insights, Africa is the region globally where e-learning revenues are most likely to increase, with South Africa the leading market on the continent. 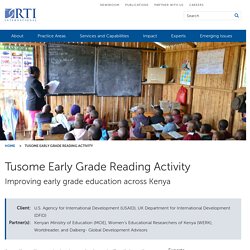 The Kenyan education system is seeking to improve learning outcomes by instilling better instructional practices, expanding resources for teacher training, and developing learning materials that support multilingual literacy. Kenya’s approach to the challenge of raising literacy and learning outcomes is unique in its ambitious goals and well-researched methods for achieving its goal at a national scale. Employing Rigorous Assessments to Improve Teaching and Learning. 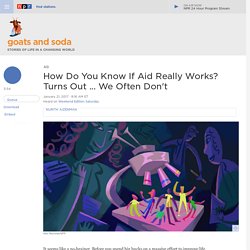 Before you spend big bucks on a massive effort to improve life for the world's poorest — say, distributing millions of free bed nets against malarial mosquitoes, or offering thousands of women microloans as small as $200 to start small businesses — you should run a smaller scale test to make sure the idea actually works. After all, just because a project sounds good in theory doesn't mean it's going to pan out in practice. For instance, what if giving out the bed nets for free makes people less likely to value them? Maybe you should charge a fee on the theory that while less people would get the nets, those who do will be the ones who see a need for them and will therefore take the trouble to actually use them.

A New Study Out Of Kenya Looks At The Broader Impact Of Vaccinating A Farmer's Herd : Goats and Soda. A Maasai elder tends to his cattle. 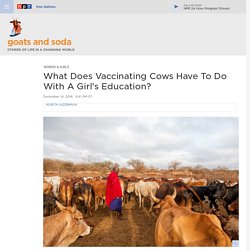 Brittak/Getty Images hide caption toggle caption Brittak/Getty Images. Tech Award 2016 Winners: Projects To Help The Poor That Have Staying Power : Goats and Soda. A woman uses the IDE-India foot-powered pump to suction water out of the ground and irrigate her crops. 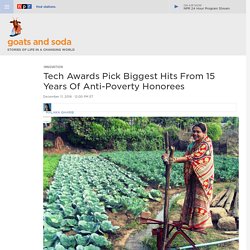 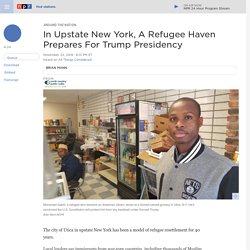 He's convinced the U.S. Constitution will protect him from any backlash under Donald Trump. Explicit cookie consent. Prosperity in sustainability. By Jeffrey D. Sachs November 07, 2016 Part of a weekly series on the economic choices facing the United States and its relations with the rest of the world. For previous entries, click here. PRESIDENT JOHN F. KENNEDY inspired Americans to great undertakings by setting bold goals: to go the moon, to overcome racial discrimination, to make peace with the Soviet Union. When is civil society a force for social transformation? Civil society in action? Credit: All rights reserved. When you look at the numbers, the growth of civil society has been remarkable: 3.3 million charities in India and 1.5 million across the United States; NGOs like the Bangladesh Rural Advancement Committee that work with hundreds of millions of people; 81,000 international NGOs and networks, 90 per cent of them launched since 1975.

That’s not counting all the street protests, social movements and informal community groups that are often omitted from the data. In the UK, for example, these latter outnumber registered charities by more than four to one. What’s to be done with Oxfam? Credit: Wikimedia/Chris Reynolds. Creative Commons Attribution-ShareAlike 2.0 license. On a bookshelf in my office sits a large red book with a plastic cover to ward off mud and blood, sweat and tears. Like all new Oxfam staff I was given a copy of the Field Director’s Handbook to guide me when I arrived in Lusaka in 1984. It’s still the best job I ever had. Conspicuously missing from the Handbook was a section on the agency itself, these being times when self-questioning was largely absent from the world of NGOs.

I am sorry for you, you mean well: trust and history in the making of a better world. The author non-reflexively instructing a Guarani community about holding the state accountable. Bolivia 2001. Credit: Rosalind Eyben. All rights reserved. My soft wool, tailored Jaeger dress was fresh from London’s New Year sales. I had lots of business cards to give away, and a mental list of what I wanted from the meeting. After his Filipino husband-and-wife team of domestic servants had placed a plate of cucumber soup in front of every guest, our host asked me to speak about the importance of something I was working on in 1999 for the UK Department of International Development (DFID) called the “global social policy principles:” labour, health and education standards that all governments would be encouraged to implement, and the World Bank to respect, when negotiating credit agreements with borrower countries.

Five disempowering traits that international NGOs must drop. Only one per cent of foreign aid reaches Southern NGOs directly. 7 Things That Make Global Poverty NGOs Successful. When it comes to what makes an aid organization truly successful, we usually think first about the numbers and the flashy website. I Love the U.N., but It Is Failing. To Help More People In Need, Researchers Urge Aid Groups: Do Less : Goats and Soda. Thousands of Haitians were promised homes by aid groups like the American Red Cross in the wake of the earthquake in 2010. Instead, many were given temporary shelters without bathrooms, kitchens or running water. Marie Arago for NPR hide caption.

Embracing a Legacy of Foreign Policy Leadership. How To Train 68.8 Million Teachers. Chinese aid is helping African economies, but not in the places that need it most. Why There's No Such Thing as Global Citizenship - Eric Liu. U.N. Goal To Eliminate Extreme Poverty And Fight Diseases Is Hampered By Lack Of Data : Goats and Soda. Emma Watson Gives a Powerful Speech for Gender Equality at the U.N. General Assembly. Let's Talk Tiki Bars: Harmless Fun Or Exploitation? Archipelago, in Washington, D.C., is among a wave of new tiki bars across the country. The World’s Rising Powers Have Fallen.

As analysts and scholars compose their first drafts of the history of the Obama administration’s foreign policy, a chapter will surely address what were once dubbed “rising powers,” a group that included Brazil, Russia, India, China, South Africa, and others. U.N. Report: Facts And Figures On The Sustainable Development Goals : Goats and Soda. Maternal mortality rates are going down because of better health services. Alicia Keys' Powerful Short Film Imagines Americans as Refugees. Why Isn't Anyone Lobbying For Climate Change? In a recent week in Washington, I took lobbying meetings with TechNet, the lumber industry and the property casualty insurance industry.

Money is flowing over the U.S.-Mexico border, but it’s going north. Wrong all along: Neoliberal IMF admits neoliberalism fuels inequality and hurts growth. Megacities, not nations, are the world’s dominant, enduring social structures — Quartz. Dan Pallotta: The way we think about charity is dead wrong. “This will stop only when the American people get fed up”: American exceptionalism, the New York Times, and our foreign policy after Barack Obama. 7 Maps That Will Change How You Think About Global Politics. Migrants Working Abroad Send $463 Billion In Remittances A Year — A Lifeline To Family Left Behind : Goats and Soda.

Guess which country does the most good for the planet? Pico Iyer joins globetrotting photographer Sebastião Salgado on the Broad Stage. Why economists put health first. Health Authorities In Brazil Suspect That A Rise In A Rare Birth Defect Could Be Tied To Zika Virus : Goats and Soda. To Help End Gender Violence, Class Teaches Teen Boys To Treat Girls As Equals : Goats and Soda. How to Get Started With Voluntourism. Millions of Americans say they’d consider leaving the US—here’s why I already have. A New Report Shares Good News About Injuries: They're Down By A Big Chunk : Goats and Soda. Deep In The Amazon, An Unseen Battle Over The Most Valuable Trees. To Save The Lives Of Babies And Mothers, Ask For Advice From Peru : Goats and Soda. The World Is Not As Hungry As You Might Think : Goats and Soda.

Pico Iyer - Why We Travel. Why income inequality is so much worse than we realize. Fighting Poverty: Lessons from Brazil. Nicholas Kristof & Sheryl WuDunn Interview: A Path Appears. UNESCO Report: Rethinking Education Towards a Global Common Good? Girl Builds Small Shelters For Homeless People Because 'Everyone Should Have A Place To Live'