Kiszla: Nolan Arenado's journey to Cuba changes view of world for star. SCOTTSDALE, Ariz. — Nolan Arenado wasn’t sure what he would find if he went to Cuba. 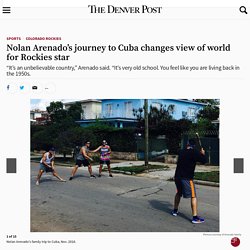 “I’ve always wanted to go, you know?” The Rockies’ star third baseman said. “It was more than I ever imagined.” He saw the country where his father lived as a child. He played baseball on city streets, just like his father had more than 50 years ago. He was there when Fidel Castro, the powerful Cuban despot, died Nov. 25 at age 90, ending a long, tumultuous chapter in the country’s history. Here’s how the world’s cartoonists are remembering Fidel Castro. As part of the world celebrates the life of Fidel Castro as a revolutionary hero who freed Cuba from dictatorship, others are celebrating his death as a man who was a dictator in his own right and turned Cuba into his personal fiefdom. 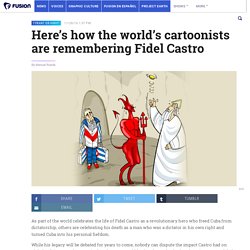 While his legacy will be debated for years to come, nobody can dispute the impact Castro had on global politics over the past six decades. Few world leaders have also had such an impact on global cartoonists over the years. And as Cuba prepares for El Comandante’s final send-off, cartoonists around the world are putting pencil to paper to give him a send-off of their own. In Venezuela, whose revolutionary government has been a close political ally, cartoonist EDO seems to suggest that neither God nor the devil wanted Castro—a joke some used to tell to explain his longevity. These Afro-Cuban women are fighting the last battle of the revolution. HAVANA—The Cuban Revolution’s universal healthcare and tuition-free education have created a more inclusive society where Afro-Cubans were given a chance to become doctors, engineers, and other professionals who helped build a new nation. 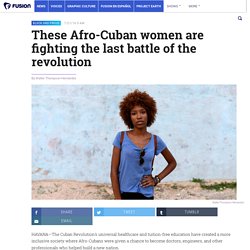 But vanquishing racism hasn’t been so easy. Despite the many advances by Afro-Cubans over the past 50 years, implicit and explicit anti-black racism continues to permeate Cuban society. Cuba's Havana International Book Fair is a giant party — Quartz. Usually, Neil Gorsuch is the one who sits in judgment, as part of a panel of appellate judges reviewing lower court records for errors. 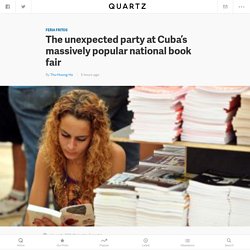 But now the tables have turned, and the judge has submitted his own record for review. Named by President Donald Trump to fill the late Justice Antonin Scalia’s seat on the Supreme Court on Jan. 31, Gorsuch faces Senate confirmation hearings in March. On Feb. 11, he responded to a Senate Judiciary Committee questionnaire with 68 pages (pdf), listing jobs, articles, club memberships, speaking engagements, and even calendar entries for events he can’t recall attending.

The sort-of Rum Diaries, 2017: Post-Castro Cuba is a crumbling gem with touches of modernity. There are no seat belts, and the speed limit is 70 mph. 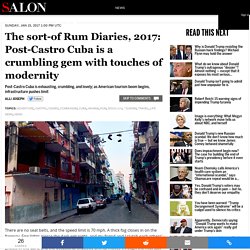 Cuba's opening to the world has a problem much closer to home than Donald Trump. A man uses the internet via public Wi-Fi in Havana, Cuba. 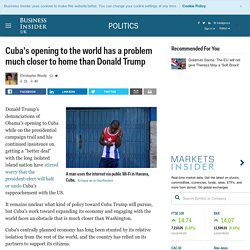 Enrique de la Osa/Reuters Donald Trump's denunciations of Obama's opening to Cuba while on the presidential campaign trail and his continued insistence on getting a "better deal" with the long isolated island nation have stirred worry that the president-elect will halt or undo Cuba's rapprochement with the US. Cuba Is the Missing Link in Jazz History. Under loosened restrictions, U.S. and Cuban jazz musicians linked up at a Havana music festival to celebrate a common heritage—but can that last under Trump? 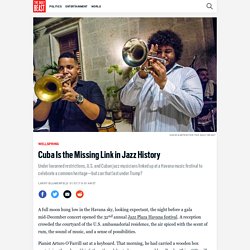 A full moon hung low in the Havana sky, looking expectant, the night before a gala mid-December concert opened the 32nd annual Jazz Plaza Havana festival. Why Cuba is an education success story and what it can teach Africa. Cuba takes education very seriously. 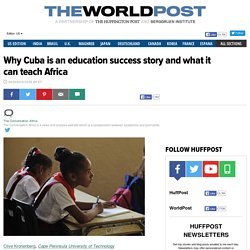 It became a top priority after Fidel Castro became prime minister in 1959 and this helped the country shake its mantle as the most unequal of the Hispanic Caribbean territories during both the colonial and post colonial early 20th century periods. The foundations of Castro’s new social - and socialist - order were premised on the common understanding that only good-quality, empowering education could conquer Cuba’s acute poverty, ignorance and underdevelopment. Cuba invested heavily to make its education system world class. "Visit Cuba, Before It Changes!" Over the course of 55 years, the United States has pursued change in Cuba with implacable tenacity and almost single-minded resolve: one armed invasion, scores of assassination plots, years of covert operations, and decades of punitive economic sanctions. 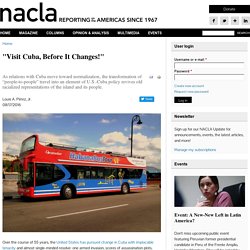 Fidel Castro: Master of the Image. Fidel Castro was every word in the book. 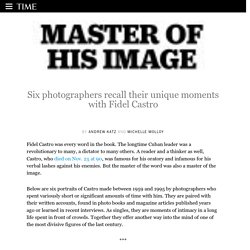 The longtime Cuban leader was a revolutionary to many, a dictator to many others. A reader and a thinker as well, Castro, who died on Nov. 25 at 90, was famous for his oratory and infamous for his verbal lashes against his enemies. But the master of the word was also a master of the image. Below are six portraits of Castro made between 1959 and 1995 by photographers who spent variously short or significant amounts of time with him. They are paired with their written accounts, found in photo books and magazine articles published years ago or learned in recent interviews. The Guardian view on Fidel Castro: man of history.

Cuba after Fidel. “There are too many Cubans who get up every day and struggle and struggle, and that’s it,” she said in an interview. “My dream is to leave.” The Montes family’s story of faith and disillusion is common. Cuban families have been arguing about Mr. Castro since he came to power. Log In. By now, many hopes that the revolution would lead to democratic reforms were dashed. The free elections that were promised never occurred. Yet Mr. Castro remained popular, affectionately referred to as Fidel. Former Cuban President Fidel Castro Dies At Age 90. Cuban leader Fidel Castro, speaking at the 30th anniversary of the communist revolution on Jan. 1, 1989, in Havana, Cuba. Castro died Friday at age 90. Charles Tasnadi/AP Fidel Alejandro Castro Ruz was born on Aug. 13, 1926, on his family's sugar plantation in Biran, Cuba.

Jose Goitia/Corbis Portrait of a young Fidel Castro in New York in 1950s. Castro got involved in revolutionary politics as a teenager and studied law at the University of Havana. Amid A Struggling Economy, Cuban Real Estate Is Booming : Parallels. A view of the Caribbean is among the things attracting new buyers to high-priced Havana real estate along the city's famous seaside strip, the Malecón. Roberto Machado Noa/LightRocket via Getty Images hide caption toggle caption Roberto Machado Noa/LightRocket via Getty Images. Havana: the city of the unfinished – in pictures.

Cuba: While The Politicians Argued, The Musicians Jammed. How one Cuban town saved lives in the middle of Hurricane Matthew's devastation.