Greece reaction. ATHENS — Greeks who voted against harsh austerity measures just last weekend accepted the government's about-face on a new bailout plan with resignation Friday, saying it's better than the economic misery they've been living with for the past few weeks. 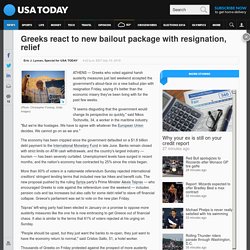 "It seems disgusting that the government would change its perspective so quickly," said Nikos Tochovitis, 34, a worker in the maritime industry. "But we're like hostages. We have to agree with whatever the European Union decides. We cannot go on as we are. " The economy has been crippled since the government defaulted on a $1.8 billion debt payment to the International Monetary Fund in late June. More than 60% of voters in a nationwide referendum Sunday rejected international creditors' stringent lending terms that included new tax hikes and benefit cuts. Tsipras' left-wing party had been elected in January on a promise to oppose more austerity measures like the one he is now embracing to get Greece out of financial chaos. Greeks in America React to Greek Financial Crisis. The almost $1 trillion EU bailout package has not quelled the Greek financial crisis, nor has it erased the memories of last week's deadly demonstrations in Athens, in which hundreds of thousands of Greeks took to the streets to protest the government's austerity measures. 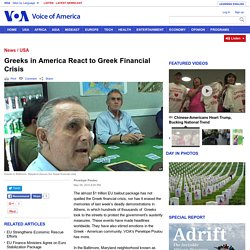 These events have made headlines worldwide. They have also stirred emotions in the Greek - American community. VOA's Penelope Poulou has more. In the Baltimore, Maryland neighborhood known as "Greek Town," one feels transported to the Greece of 40 years ago. Shopkeepers sit outside their little stores enjoying a warm spring breeze. These days their conversations are heated because of the Greek economic crisis which, they say, they have watched brewing for years. How the Olympics rotted Greece. There is no better place to contemplate ephemeral human ambition and a crumbling national economy than a ruined building. 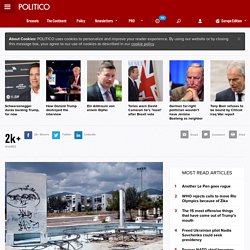 In the aftermath of Sunday’s referendum, facing national debts of more than $349 billion and a collapsing economy, Athenians have plenty of choice. They can, of course, climb up to the Parthenon, but perhaps a better choice would be the overgrown Olympic tae kwon do, beach volleyball or softball stadia or the waterless Olympic swimming pools and canoe and kayak facilities. There, and at the majority of other arenas built for the 2004 Games, nothing remains but decay.

In those abandoned monuments to misjudgment, the Greeks might ponder Ozymandias: “‘Look on my works, ye Mighty, and despair!’” They might also ask why, on June 30, when Greece missed a payment to the International Monetary Fund, the International Olympic Committee couldn’t have dipped into its petty cash and found $1.7 billion. Greece owes an awful lot of money to a lot of people. En report 658. The olympic games of the antiquity. Greece debt crisis: How did we get here? At first, the most ambitious attempt ever to create a new multinational currency all seemed to go so well. 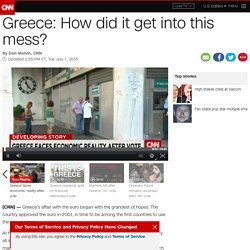 The predicted problems with banks and vending machines never materialized. The euro surpassed the dollar in value. The launch was hailed as a success. And yet for Greece, it seems now to have all fallen flat. How did it happen? To join, a country had to demonstrate that it had achieved "economic convergence" with the other eurozone members -- a requirement meant to ensure that different countries would not jeopardize the common currency.

When Greece was accepted, Finance Minister Yannos Papantoniou described it as a day that would place Greece firmly at the heart of Europe. But even then, warnings were sounded. But bogus figures hid the true extent of its deficit 2002: Everyone now agrees that Greece cooked its books. One of the economic convergence requirements was that a country not have a budget deficit of more than 3% of GDP, or gross domestic product. Greece needed help. Greek debt crisis: Everything you need to know. Play Video Play Fullscreen EU leaders want Greek debt deal done by Saturday Bloomberg's Vonnie Quinn reports on today's top news stories. 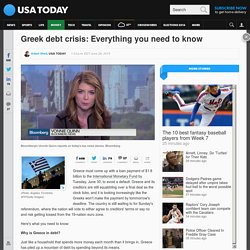 Bloomberg Greece must come up with a loan payment of $1.8 billion to the International Monetary Fund by Tuesday, June 30, to avoid a default. Indebted Greeks Question the Cost of the 2004 Olympics. Greece debt crisis: Are Athens Olympic Games of 2004 to blame? The abandoned beach volleyball arena in Athens. 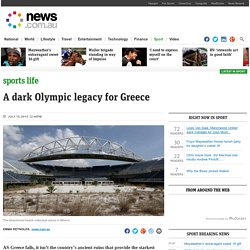 AS Greece falls, it isn’t the country’s ancient ruins that provide the starkest symbol of decay. It’s the state-of-the-art facilities constructed just over ten years ago for the Athens Games, many of which lie abandoned, dirt encrusted on seats and grass sprouting through cracks in the floors. Greece Signs Deal to Sell Stake in Port of Piraeus to China’s Cosco. How the 2004 Olympics Triggered Greece's Decline. As they watch the London Olympics, many Greeks may wonder how their country went from the international glory of the Athens Games in 2004 to the recriminations of today’s crisis. 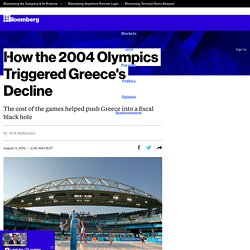 Hosting the event cost almost €9 billion ($11 billion at today’s exchange rate), making the 2004 Games the most expensive ever at that point. Greek taxpayers were on the hook for €7 billion, which did not include the cost of extra projects such as a new airport and metro system. Within days of the closing ceremony, Greece warned the euro area that its public debt and deficit figures would be worse than expected. The 2004 deficit came in at 6.1 percent of gross domestic product, more than double the euro-zone limit, while debt reached 110.6 percent of gross domestic product, the highest in the European Union. (Today, Greece’s debt is 165.3 percent of GDP.) With public debt totaling €168 billion in 2004, it’s clear that the Olympics alone did not bring about an economic collapse. Greek Lenders Told to Raise $15.9 Billion to Cover Bad Loans. Photo ’s four biggest banks, which suffered severe losses when they were shuttered this summer as the country veered toward economic collapse, must raise nearly $16 billion in new money to withstand any new crisis, the European Central Bank said on Saturday. 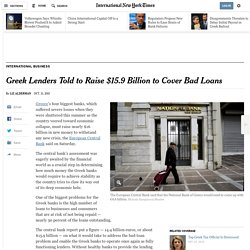