S Coral Reef Conservation Program: How does an oil spill affect coral reefs? Race to save our coral reefs: With half of them destroyed in 30 years, scientists launch world's most comprehensive record of their demise. Around 50 per cent of coral reefs have been destroyed in the last 30 years Scientists hope record will provide a ‘step-change’ in battle to protect themThe free resource can be viewed online at www.globalreefrecord.org By Ellie Zolfagharifard Published: 12:31 GMT, 23 September 2013 | Updated: 12:42 GMT, 23 September 2013 A comprehensive record of the state of the world's vanishing coral reefs has been launched today. 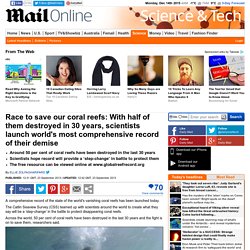 The Catlin Seaview Survey (CSS) teamed up with scientists around the world to create what they say will be a ‘step-change’ in the battle to protect disappearing coral reefs. S 25 Things You Can Do to Save Coral Reefs. 1. 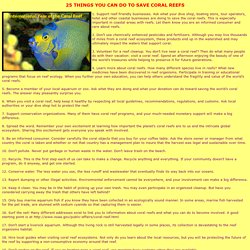 Support reef-friendly businesses. Ask what your dive shop, boating store, tour operators, hotel and other coastal businesses are doing to save the coral reefs. This is especially important in coastal areas with reefs. Let them know you are an informed consumer and care about reefs. 2. 3. 4. Greenpeace Australia Pacific. Top 10 Most Endangered Fish Species. "There are plenty of other fish in the sea," goes the old cliché. 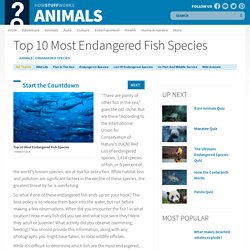 Blue Ventures » Blue Ventures. Volunteer with Blue Ventures Madagascar Join our award-winning volunteer expeditions at our field base in the seaside village of Andavadoaka. 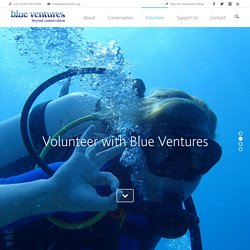 Find out more Belize Join our team surveying the reefs in Bacalar Chico Marine Reserve and experience life at a remote dive camp. Find out more Lionfish Dive Trips Contribute to our research and remove invasive lionfish from Belize’s reefs while you scuba dive on a 7 or 16 day lionfish expedition. Find out more Timor-Leste Join us as we build a new expedition base in Timor-Leste. Find out more Universities, Schools & Groups We offer group expeditions designed for various groups including universities, schools and dive clubs wishing to visit a tropical location, with expert guidance and organised activities. Find out more Independent Research Projects Visiting undergraduate and postgraduate students can research a wide range of marine biology and conservation topics at our field sites in Madagascar and Belize. Protect save coral reef. Miamisci. Coral Reefs are fascinating and mysterious ecosystems. 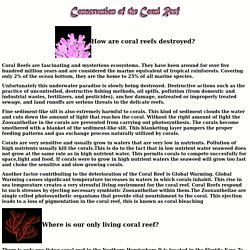 They have been around for over five hundred million years and are considered the marine equivalent of tropical rainforests. Covering only 2% of the ocean bottom, they are the home to 25% of all marine species. Unfortunately this underwater paradise is slowly being destroyed. Destructive actions such as the practice of uncontrolled, destructive fishing methods, oil spills, pollution (from domestic and industrial wastes, fertilizers, and pesticides), anchor damage, untreated or improperly treated sewage, and land runoffs are serious threats to the delicate reefs. Fine sediment-like silt is also extremely harmful to corals. Corals are very sensitive and usually grow in waters that are very low in nutrients. Another factor contributing to the deterioration of the Coral Reef is Global Warming. Where is our only living coral reef? There is another issue involving the sanctuary now. Suggestions concerning our reefs. What is coral bleaching? Warmer water temperatures can result in coral bleaching. 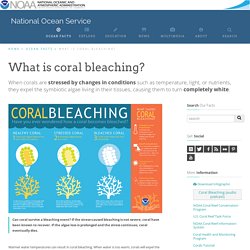 When water is too warm, corals will expel the algae (zooxanthellae) living in their tissues causing the coral to turn completely white. This is called coral bleaching. Protect & Save Coral Reefs. Great Barrier Reef Hotels, Australia: Great savings and real reviews. Located just off the coast of Australia, the Great Barrier Reef is one of the world's most fascinating destinations. 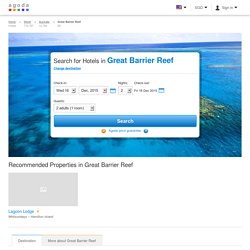 Stretching more than 2600 kilometers along the Queensland coast, one of the best spots to explore the reef is from the Whitsunday Islands, a collection of islands just north of Mackay, 900 kilometers north of the Queensland capital, Brisbane. Three of the most popular Whitsunday Islands are Hayman Island, Hamilton Island and Daydream Island. Hayman Island is reserved exclusively for Hayman Island Resort, a luxury establishment that offers a full range of modern accommodation, from standard sea-view rooms to themed penthouses with butler service. This private island has everything onsite – several restaurants, a spa, water sports, wedding facilities, even private homes for those seeking a sea change. Hamilton Island is the second-largest of the Whitsundays and offers pure white sands and the idyllic turquoise waters of the Coral Sea. Reef Relief Home - Reef Relief.

Coral Reefs: Coral Bleaching What You Need to Know. "Corals have a limited temperature range within which they can live. 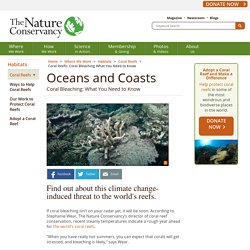 When it gets too hot, they get stressed out. " Ways to Help Coral Reefs. 10 Easy Steps to Help Protect Coral Reefs Do you want to make a difference every day? 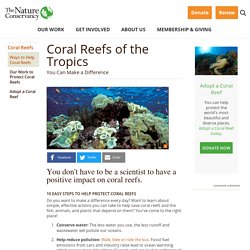 Want to learn about simple, effective actions you can take to help save coral reefs and the fish, animals, and plants that depend on them? You've come to the right place! Conserve water: The less water you use, the less runoff and wastewater will pollute our oceans. Help reduce pollution: Walk, bike or ride the bus. Endangered Species International. Coral reefs are complex mosaic of marine plants and animals. 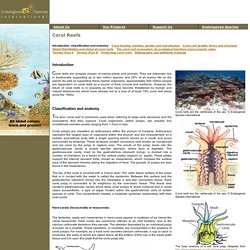 They are extremely rich in biodiversity supporting up to two million species and 25% of all marine life on the planet. Basic Facts About Coral Reefs. Coral reefs are some of the most diverse ecosystems in the world, housing tens of thousands of marine species. About one-third of all marine fish species live part of their lives on coral reefs. © istockphoto Reefs in the Florida Keys, for example, hold at least 45 species of stony coral, 37 species of octocoral, five species of sea turtles, 500 species of fish, about 1,700 species of mollusks and hundreds of species of sponges. In addition to their incredible value as wildlife habitat, coral reefs protect coastlines from storms and provide billions of dollars of food and jobs every year to people around the world. Behavior & Diet. Coral Reefs and Climate Change - How can you help coral reefs - Teach Ocean Science.

5 Species We Stand to Lose if Coral Reefs are Destroyed and What YOU Can do About it. Coral reefs, some of the Earth’s most remarkable natural structures, have more than aesthetic significance. These tiny animals support lifestyles of thousands of other species, including the species that pose the greatest threat to corals: humans. Many reefs have lost 40-50% of their corals in the past 30 years according to the University of Columbia, due to detrimental human activities, as well as natural phenomena such as hurricanes, cold weather, and altered salinity. Examples of harmful human activities include deep water trawling, using cyanide and explosives, heat pollution from power plant factories, human debris, oil spills, reckless tourism, and harvesting corals for the aquarium hobbyists.

Ocean acidification and coral bleaching are serious threats to coral colonies. Warm water conditions cause zooxanthellae (algae that should be BFFs with coral) to leave their symbiotic partners (coral), resulting in corals losing their beautiful colors. 1. National Geographic 2. 3. Hepca.org. Coral Reefs and Climate Change - How can you help coral reefs - Teach Ocean Science. 72 US sailors leave ship stuck in Tubbataha Reef. INTRUDER The USS Guardian, a US Navy minesweeper, is still stuck after running aground Tubbataha Reefs, a Unesco World Heritage Site in Sulu Sea, in this Jan. 17 photo released by the Armed Forces of the Philippines Western Command. AP The US Navy minesweeper that ran aground on a coral reef remained stuck at the Tubbataha Reefs Natural Park for the second day on Friday but most of the US sailors had left the ship for safety reasons after initial efforts to free the vessel failed, the US Navy’s 7th Fleet said in a statement on Friday.

It said 72 of the 79 crew of the USS Guardian were transferred to a military support vessel by small boat. A small team, including the commanding and executive officers, would remain on board to try to extricate the ship with as little damage to environment as possible, the statement said. How the US warship managed to enter the marine sanctuary puzzles the Philippine Navy. “We’re asking the same question, too. Park rangers ignored. 5 Causes of Coral Reef Destruction.