Need to Make a Change? This Is How to Think About It. 5 Unexpected Ways To Break A Bad Habit. The new year is still fairly fresh, but that doesn't mean that many of us haven't already been tested in our ability to break the patterns we swore to leave behind in 2014. 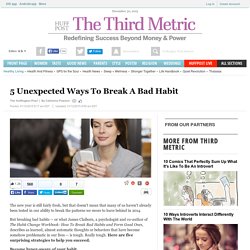 But breaking bad habits -- or what James Claiborn, a psychologist and co-author of The Habit Change Workbook: How To Break Bad Habits and Form Good Ones, describes as learned, almost automatic thoughts or behaviors that have become somehow problematic in our lives -- is tough. Really tough. Here are five surprising strategies to help you succeed. Become hyper-aware of your habit. Trying to ignore the behavior you want to change might seem like a good way to vanquish it, but one of the first strategies Claiborn is likely to recommend is, in fact, the opposite.

"One of the things I'm likely to suggest is some sort of record keeping -- it may take the form of making a checklist to find out how often you're doing things and under what circumstances you're doing them," he said. Stop focusing on what you're not going to do. The science of setting goals. It’s the time of year when optimism strikes anew and we think to ourselves: our New Year’s resolutions will totally work out this time. 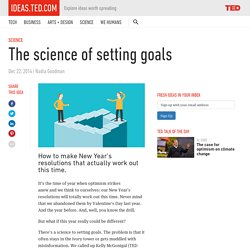 Never mind that we abandoned them by Valentine’s Day last year. And the year before. And, well, you know the drill. But what if this year really could be different? There’s a science to setting goals. Choose a goal that matters, not just an easy win. Our brains are wired to love rewards, so we often set simple goals that make it easy to check off boxes. A meaningful goal — one that truly inspires you to change — requires going deeper. Focus on the process, not the outcome. When we set goals, it’s easy to fixate on that magical ending when we’ve reached the goal and everything is better. “People often get lost thinking they have to change everything all at once,” says McGonigal. Scientists Say It Only Takes 66 Days To Change Your Life, If You're Strong Enough. There’s no denying that we are, indeed, creatures of habit. 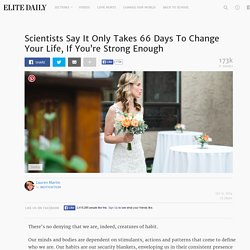 Our minds and bodies are dependent on stimulants, actions and patterns that come to define who we are. Our habits are our security blankets, enveloping us in their consistent presence and comfort of familiarity. We do them unconsciously, sticking fingers and cigarettes in our mouths and cracking our knuckles only to find that we can’t remember when this habit began. According to Charles Duhigg, author of “The Power of Habit,” habits are not born, but created.

Every bad, good or insignificant habit starts with a psychological pattern called a “habit loop.” Duhigg reported to NPR, the “habit loop” is a three-part process. The third step is the reward, or “something that your brain likes that helps it remember the ‘habit loop’ in the future.” Once we’ve formed habits, they are hard to break because, many times, we forget we’re doing them. We become slaves to our habits. Be Obnoxious (Days 1- 22) Shout about it. Treat Yo’ Self (66 +) How to Develop a Good Habit. How Long It Takes to Form a New Habit. By Maria Popova “We are what we repeatedly do,” Aristotle proclaimed. 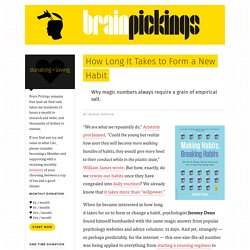 “Could the young but realize how soon they will become mere walking bundles of habits, they would give more heed to their conduct while in the plastic state,” William James wrote. But how, exactly, do we rewire our habits once they have congealed into daily routines? We already know that it takes more than “willpower.” When he became interested in how long it takes for us to form or change a habit, psychologist Jeremy Dean found himself bombarded with the same magic answer from popular psychology websites and advice columns: 21 days. In a study carried out at University College London, 96 participants were asked to choose an everyday behavior that they wanted to turn into a habit.

This notion of acting without thinking — known in science as “automaticity” — turns out, perhaps unsurprisingly, to be a central driver of habits. It’s like trying to run up a hill that starts out steep and gradually levels off.