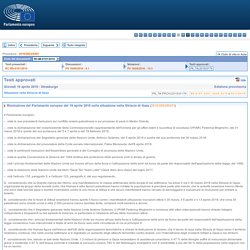 How Britain Destroyed the Palestinian Homeland. When I was a child growing up in a Gaza refugee camp, I looked forward to November 2. 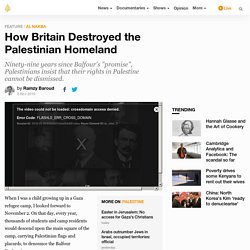 On that day, every year, thousands of students and camp residents would descend upon the main square of the camp, carrying Palestinian flags and placards, to denounce the Balfour Declaration. Truthfully, my giddiness then was motivated largely by the fact that schools would inevitably shut down and, following a brief but bloody confrontation with the Israeli army, I would go home early to the loving embrace of my mother, where I would eat a snack and watch cartoons. At the time, I had no idea who Balfour actually was, and how his "declaration" all those years ago had altered the destiny of my family and, by extension, my life and the lives of my children as well. Palestinians in Gaza plan tent city protest along Israeli border. Ahed Tamimi sentenced to 8 months in prison in plea deal. PLO condemns attack on prime minister in Gaza. PLO condemns attack on prime minister in Gaza RAMALLAH, March 13, 2018 (WAFA) – Palestine Liberation Organization (PLO) Executive Committee member Hanan Ashrawi condemned on Tuesday the explosion in Gaza targeting Prime Minister Rami Hamdallah and General Intelligence Chief Majed Faraj, describing it as cowardly act. 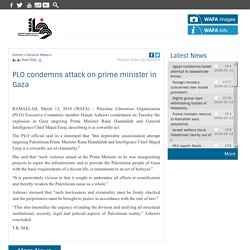 The PLO official said in a statement that "this deplorable assassination attempt targeting Palestinian Prime Minister Rami Hamdallah and Intelligence Chief Majed Faraj is a cowardly act of criminality.” She said that “such violence aimed at the Prime Minister as he was inaugurating projects to repair the infrastructure and to provide the Palestinian people of Gaza with the basic requirements of a decent life, is tantamount to an act of betrayal.” 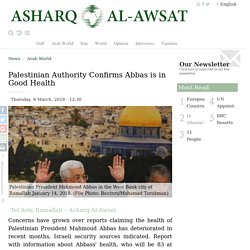 Report with information about Abbass' health, who will be 83 at the end of the month, has been submitted to Israeli political and security officials. The purpose behind such a report is to stress the importance of Israel preparing for a sudden absence of Abbas. Although the security cooperation between Israel and the PA is going on well, Israel is readying itself for the possibility that a continued worsening of Abbas’ health will intensify the succession wars in the Palestinian Authority (PA) and undermine the current relative stability in the West Bank, according to the report. 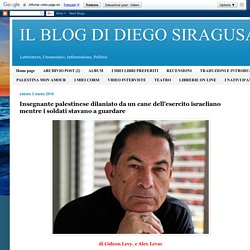 Palestinian Fatah party ends conference with boost for Abbas. RAMALLAH, West Bank: Palestinian President Mahmoud Abbas tightened his hold on Fatah and shut out a key rival, according to unofficial results Sunday of leadership elections in the movement which has dominated West Bank politics for decades. 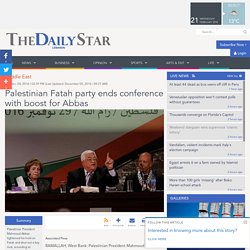 The election comes at a time of intense behind-the-scenes battles among senior Fatah members to succeed Abbas once the 81-year-old decides to step down. However, Abbas has given no sign that he plans to retire from the presidency or his top jobs in Fatah and the Palestine Liberation Organization. On Saturday, more than 1,300 Fatah delegates confirmed Abbas' continued Fatah leadership role by acclamation and elected 18 members of the movement's top decision-making Central Committee. Unofficial results indicated that top vote getters were Marwan Barghouti, a Palestinian uprising leader jailed by Israel, and Jibril Rajoub, a former West Bank security chief. Esteri. M. Abbas Statements ar UN. Mme. 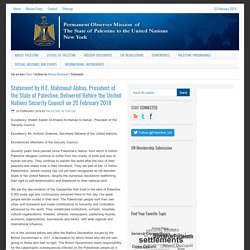 President, At the outset, I congratulate you on your assumption of the Security Council Presidency, confident of the United States’ skilled guidance of the Council’s important work. WATCH LIVE: Palestinian Authority President Mahmoud Abbas addresses UN Security Council. Palestinian Authority President Mahmoud Abbas addressed the United Nations Security Council in New York City on Tuesday, calling for a "multilateral international mechanism" for the peace process, in lieu of US brokerage, and called on countries to recognize a Palestinian state. 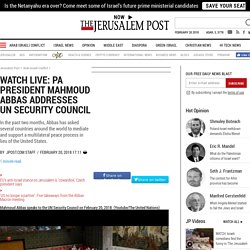 "Therefore, to solve the Palestine question, and this is our position and our belief, it is essential to establish a multilateral international mechanism emanating from an international conference," Abbas said about the peace process. He also made an explicit call for recognition of a Palestinian state. "Recognition doesn't go against negotiations, it rather promotes negotiations. Therefore I call upon the members who have yet to recognize the state of Palestine to do so. President Abbas proposes peace plan at security council. 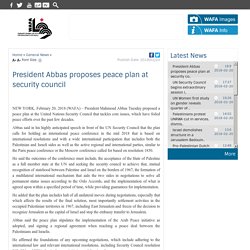 Abbas said in his highly anticipated speech in front of the UN Security Council that the plan calls for holding an international peace conference in the mid 2018 that is based on international resolutions and with a wide international participation that includes both the Palestinian and Israeli sides as well as the active regional and international parties, similar to the Paris peace conference or the Moscow conference called for based on resolution 1850. Abbas said the peace plan stipulates the implementation of the Arab Peace initiative as adopted, and signing a regional agreement when reaching a peace deal between the Palestinians and Israelis. Following is the official translation of the speech: Ready for negotiations if East Jerusalem made capital: Mahmoud Abbas. 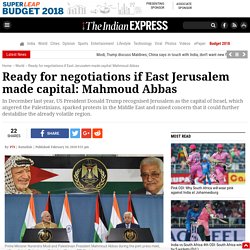 (Source: PTI Photo) Greece’s Dangerous Alliance with Israel. For a brief historical moment, Alexis Tsipras and his political party, Syriza, ignited hope that Greece could resurrect a long-dormant Leftist tide in Europe. A new Greece was being born out of the pangs of pain of economic austerity, imposed by the European Union and its overpowering economic institutions – a troika so ruthless, it cared little while the Greek economy collapsed and millions of people experienced the bitterness of poverty, unemployment and despair.

The Coalition of the Radical Left (Syriza) came to power in January 2015 as a direct outcome of popular discontent with the EU. It was a time where ordinary people took a stance to fend for whatever semblance of sovereignty that was not wrestled away from them by politicians, bankers and powerful bureaucratic institutions. The result, however, was quite disappointing. Syriza sold out, not only politically and ideologically, but in an actual physical sense as well. Popular Conference of Palestinians Abroad holds 5th meeting. Abbas' government sued over alleged CIA-backed wiretapping. Titled. Palestinian killed as Israelis raid Jenin-area village. A Palestinian man was killed by Israeli forces in the occupied West Bank during a confrontation sparked by the soldiers.

Ahmad Samir Obeid, 19, was shot in the head after the Israeli army raided the village of Wadi Burqin, near the northern town of Jenin on Saturday night. He was taken to the local hospital, where doctors declared his death a short time later. He is the seventh Palestinian to be killed by Israel this year. Eight other Palestinians were injured by the Israeli army, who used live ammunition and rubber-coated steel bullets. Can Europe save the Palestinian Authority? Mahmoud Abbas to deliver a rare address at UNSC meeting. One state or two states? You’re asking the wrong question. What we desperately need now is to go back to the basics and recognize that guaranteeing Palestinians’ rights is the foundation for any political solution.

A Palestinian youth opens a gate in the Israeli wall, during a protest marking 12 years for the struggle against the wall and the occupation in the West Bank village of Bil’in, February 17, 2017. A new poll reveals that following Trump’s Jerusalem declaration there has been a drop in support for the two-state solution among both Israeli Jews and Palestinians in the occupied territories – with both communities dipping below the 50 percent level. Only Palestinians with Israeli citizenship who live inside the Green Line show overwhelming support for this solution. The poll also shows that in tandem with this ongoing downward shift, there is a significant rise in the hostility of each group toward the other, as well as increasing support for armed struggle or a “decisive war” as a solution to the conflict. Support for two states drops below 50% among Jewish Israelis & Palestinians alike. Given alternatives to a two-state solution, nearly 20 percent of Jewish Israelis said they would opt for a ‘definitive war,’ and nearly 40 percent of Palestinians said they support armed struggle.

By Yael Marom Israeli soldiers stop Palestinians at a flying checkpoint at the entrance to the West Bank city of Hebron, June 15, 2014. (Yotam Ronen/Activestills.org) For the first time in recent years, fewer than half of Jewish Israelis and Palestinians support a two-state solution, according to a public opinion poll published Thursday. La Palestine va demander la pleine adhésion au Conseil de sécurité. WordPress.com. The two-state solution is no longer feasible: Time to decide. Binyamin Netanyahu fantasizes about 60 more years of occupation – and the Palestinians should demand equal citizenship in Israel If anyone wanted to know what Binyamin Netanyahu actually thinks about the peace process, he said it clearly himself last week: According to Netanyahu, the Palestinian appeal to the UN “will gridlock the negotiations for 60 years”. So, 44 years after the occupation and 18 years after the Israeli government and representatives of the Palestinians began negotiating, Netanyahu thinks it feasible to carry on for some 60 more years, give or take.

A Gerusalemme Trump cerca la rivincita contro Putin. 70 Years of Broken Promises: The Untold Story of the Partition Plan. Congressional hearing on Jerusalem shuts out Palestinians. A Bruxelles la prima Conferenza europea contro la colonizzazione israeliana. What the map of #Palestine looked like 100 years ago. #BalfourDeclaration. One century after World War I and the Balfour Declaration: Palestine and Palestine studies. Italian protest urges cancellation of Giro d’Italia race to end support of apartheid and colonization.

Abbas meets with Putin, 'no solution without Russia' - Palestinian N. A. Boycott Israel News: Alert 28th Apr 2017 - Vigil in Solidarity With Palestinian Prisoners Hunger Strike. How artful can Trump be when dealing with Palestine-Israel conflict? Israeli Prisons and Palestinian Lives – Palestine Square. Donald Trump tells Abbas 'we will get it done' on Israel-Palestinian peace deal.