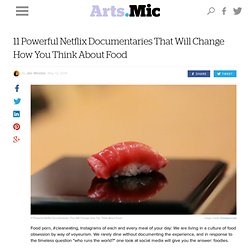 We rarely dine without documenting the experience, and in response to the timeless question "who runs the world? " one look at social media will give you the answer: foodies. But there is a lot we can't learn about food from the perfectly filtered photos on our feeds. Documentaries are a powerful way to focus on smaller stories about the food industry that highlight the bigger truths about where our food comes from and how it affects everything from our bodies to the environment. Netflix is now home to countless food-inspired movies that examine the creation of, inspiration behind and taste of our favorite subject. 30 Things You Should Do (At Least) Once A Year. Earthlings [Full Film] Freakonomics- El Lado Oculto de la Economía. How to hack your biology and be in the zone every single day. INFOGRAPHIC: Top 18 houseplants for purifying the air you breathe, according ... Houseplants do wonders for a house: they breathe new life to a room, add a bright pop of color, and purify the air. 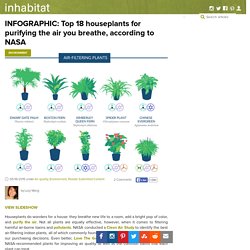 Not all plants are equally effective, however, when it comes to filtering harmful air-borne toxins and pollutants. NASA conducted a Clean Air Study to identify the best air-filtering indoor plants, all of which commonly found at local flower shops, to help guide us in our purchasing decisions. Even better, Love The Garden created an infographic that lists 18 NASA-recommended plants for improving air quality as well as the common toxins that each plant can treat. No. 37: Big Wedding or Small? Simon Sinek: How great leaders inspire action. Steve Jobs One Last Thing with subtitles. Stop Trying to Be Happy. If you have to try to be cool, you will never be cool. 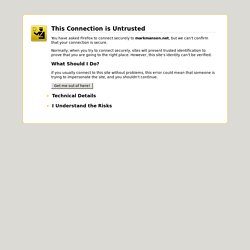 If you have to try to be happy, then you will never be happy. Maybe the problem these days is people are just trying too hard. Happiness, like other emotions, is not something you obtain, but rather something you inhabit. When you’re raging pissed and throwing a socket wrench at the neighbor’s kids, you are not self-conscious about your state of anger. You are not thinking to yourself, “Am I finally angry? Just as a confident man doesn’t wonder if he’s confident, a happy man does not wonder if he’s happy. What this implies is that happiness is not achieved in itself, but rather it is the side effect of a particular set of ongoing life experiences. Happiness is not the same as pleasure When most people seek happiness, they are actually seeking pleasure: good food, more sex, more time for TV and movies, a new car, parties with friends, full body massages, losing 10 pounds, becoming more popular, and so on.

Pleasure is a false god. TED Talks that teach you about business. The Patent That Could Destroy Monsanto And Change The World… To Fall in Love With Anyone, Do This - NYTimes.com. I Googled Dr. 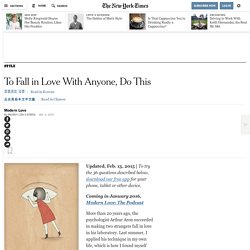 Aron’s questions; there are 36. We spent the next two hours passing my iPhone across the table, alternately posing each question. They began innocuously: “Would you like to be famous? In what way?” And “When did you last sing to yourself? But they quickly became probing. In response to the prompt, “Name three things you and your partner appear to have in common,” he looked at me and said, “I think we’re both interested in each other.” I grinned and gulped my beer as he listed two more commonalities I then promptly forgot. The questions reminded me of the infamous boiling frog experiment in which the frog doesn’t feel the water getting hotter until it’s too late. Uk.businessinsider. Flickr/poptech We all know the conventional career advice: Confidence is important. 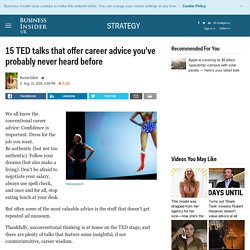 Dress for the job you want. Be authentic (but not too authentic). Follow your dreams (but also make a living). Uk.businessinsider. Richard Martin-Roberts / Stringer / Getty Images "In a free-market economy, anyone can make as much money as they want," emphasizes self-made millionaire Steve Siebold, who has also studied over 1,200 of the world's wealthiest people. 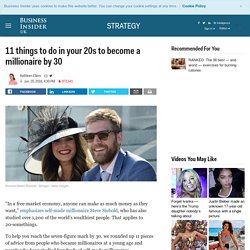 That applies to 20-somethings. To help you reach the seven-figure mark by 30, we rounded up 11 pieces of advice from people who became millionaires at a young age and people who have studied hundreds of self-made millionaires. We can't guarantee millionaire status, but doing these things won't hurt your odds: 1. "In today's economic environment you cannot save your way to millionaire status," writes Grant Cardone, who went from broke and in debt at 21 to self-made millionaire by 30. "My income was $3,000 a month and nine years later it was $20,000 a month. Earning more money is often easier said than done, but most people have options. David Ramos/Stringer/Getty Images. Watch The Great Dictator Watch Movies Online Free. Why You Should Meditate — And How To Do It. Ever been really stressed? 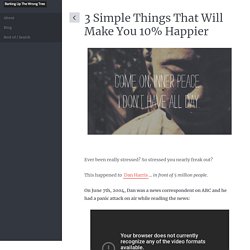 So stressed you nearly freak out? This happened to Dan Harris… in front of 5 million people. On June 7th, 2004, Dan was a news correspondent on ABC and he had a panic attack on air while reading the news: