Chessprogramming - Home. FishCooking. TCEC - Archive Mode. Time control Starting from Season 5, the time control is 120 minutes + 30 seconds added per move for the whole game, in all events (an event is either a Stage or the Superfinal). 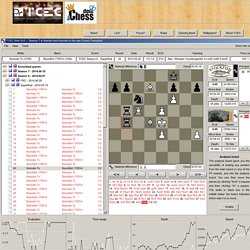 If an engine loses on time, the result will not be changed or the game replayed. If the TCEC game server locks up at any time during a game (BSOD, freeze etc), that game will be restarted unless the last position was a 6-man or less tablebase position, then it will be manually adjudicated.Game adjudication A game can be drawn by the normal 3-fold repetition rule or the 50-move rule. However, a game can also be drawn at move 40 or later if the eval from both playing engines are within +0.05 to -0.05 pawns for the last 5 moves, or 10 plies. If there is a pawn advance, or a capture by any kind, this special draw rule will reset and start over. In the website this rule is shown as "TCEC draw rule" with a number indicating how many plies there are left until it kicks in.

Edizioni Ediscere - Siti amici. Great games. Gödel's Lost Letter and P=NP. Ken Thompson is one of the co-inventors of UNIX, perhaps one of the greatest programmers who ever lived, and won the 1983 Turing Award for his important work. 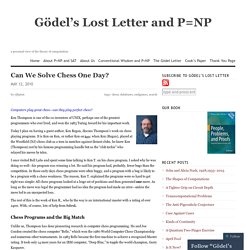 Today I plan on having a guest author, Ken Regan, discuss Thompson’s work on chess playing programs. It is Ken on Ken, or rather Ken on : when Ken (Regan), played at the Westfield (NJ) chess club as a teen in matches against distant clubs, he knew Ken (Thompson) not by his famous programming handle but as the “club techie” who relayed his moves by telex. I once visited Bell Labs and spent some time talking to Ken T. on his chess program. I asked why he was doing so well—his program was winning a lot. The rest of this is the work of Ken R., who by the way is an international master with a rating of over 2400. Chess Programs and the Big Match Unlike us, Thompson has done pioneering research in computer chess programming. . The Machine : Program & Events : Park Avenue Armory. The first review of the Armory’s new play is out and it is a rave! 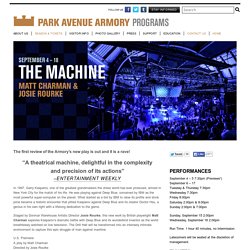 In 1997, Garry Kasparov, one of the greatest grandmasters the chess world has ever produced, arrived in New York City for the match of his life. He was playing against Deep Blue, conceived by IBM as the most powerful super-computer on the planet. What started as a bid by IBM to raise its profile and stock price became a historic encounter that pitted Kasparov against Deep Blue and its creator Doctor Hsu, a genius in his own right with a lifelong dedication to the game. Staged by Donmar Warehouse Artistic Director Josie Rourke, this new work by British playwright Matt Charman explores Kasparov’s dramatic battle with Deep Blue and its wunderkind inventor as the world breathlessly watched on live television. The Drill Hall will be transformed into an intensely intimate environment to capture this epic struggle of man against machine. U.S. Photo: Joel Chester Fildes. Komodo 8: Deep Blue revisited (part one) The year was 1997. 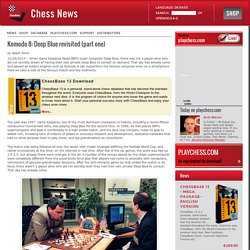 Garry Kasparov, one of the most dominant champions in history, including a record fifteen consecutive tournament wins, was playing Deep Blue for the second time. In 1996, he had played IBM's supercomputer and beat it comfortably in a high profile match, and the blue chip company made its goal to defeat him, investing tens of millions of dollars in exclusive research and development, dedicated hardware that had no other purpose than to play chess, and top grandmasters as consultants. The match was being followed all over the world, with media coverage befitting the football World Cup, and rather innovatively at the time: on the internet in real time. After five of the six games, the score was tied up 2.5-2.5, but already there were changes in the air. A number of the moves played by the chess supercomputer were completely different from the usual brute force play that players had come to associate with computers, reminiscent of genuine grandmaster decisions. 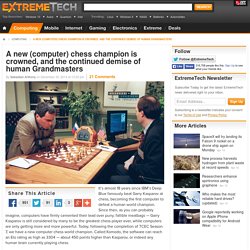 Since then, as you can probably imagine, computers have firmly cemented their lead over puny, fallible meatbags — Garry Kasparov is still considered by many to be the greatest chess player ever, while computers are only getting more and more powerful. Il manuale della Strategia Scacchistica. Ogni giocatore conosce il problema: l'apertura è terminata, e ora? 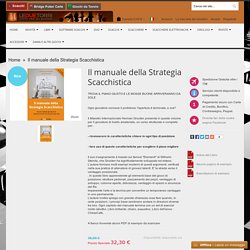