Morphy vs Duke Karl / Count Isouard 1858 "A Night at the Opera" Wild romantism: Zukertort vs Anderssen 1865. Lasker vs Steinitz 1894. Rubinstein's immortal: Rotlewi vs Rubinstein (1907) Gypsy: It is easy to be awed by this game. 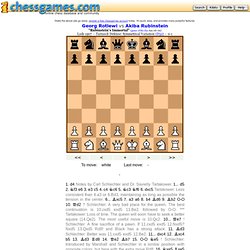 So, one more time, in a slow motion: I will summarize what I gathered from the game and from your comments. Rubinstein's play in the opening was subtle, Rotlewi's less so. After fourteen moves, Rubinstein was, in a symmetric, mostly open position, two clear tempos up. Where did those white tempos go? Into the detour maneuvers Qd2-e2 and Bd3xc4 for sure. Pawn structure mastery: Lasker vs Capablanca 1921. Benjamin Lau: <It's the final where he shows more skills than Lasker, another great chessender. 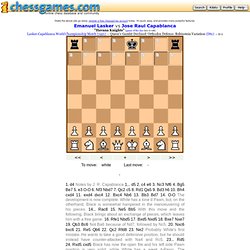 Strategic masterpiece: Spassky vs Petrosian 1966. 13 year old Fischer... Byrne vs Fischer 1956. LIFE Master AJ: Here are some of the commonly repeated misconceptions that I have heard - over the years - about this game. #1.) 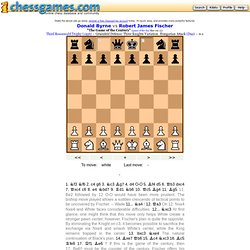 Donald Byrne wasn't that strong of a player. (In fact, he was easily in the top 5 in the USA, and around # 65 in the world!) #2.) Absolute brillancy: Byrne vs Fischer 1963. AylerKupp: <Charles Sullivan> This has always been one of my favorite games. 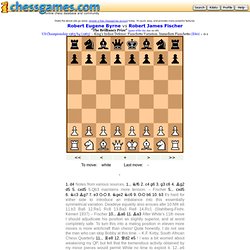 And I consider 18...Nxg2 one of the best moves ever played, possibly the best ever given the concept behind it. Fischer must have been able to see this move and its follow up before playing 12...e5, since both 14.Rfd1 and 15.Qc2 are, on the surface, very reasonable moves for White. Poor Byrne apparently didn't have any idea of what was coming! It's difficult (impossible?) In games to reach a definite conclusion using engine analysis with such long lines.

I had run a Houdini 1.5a analysis a short time ago to see what it thought was White's best 14th move. Click for larger view At the time I thought that this looked pretty grim for White to me. The match of the century: Fischer-Spassky World Championship 1972. AylerKupp: A look at the current offerings devoted exclusively to the 1972 match (there are some other books that contain information about the match but are not dedicated to it) shows the following: 1. 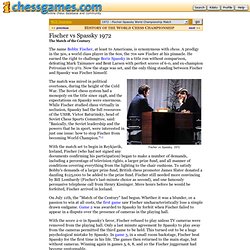 "Fischer/Spassky: The New York Times Report on the Chess Match of the Century" by Richard Roberts, Francis Wyndham, C.H. Fischer vs Spassky 1972: N°6. Spassky vs Fischer 1972: n°13. K's immortal: Kasparov vs Topalov 1999. The octopus: Karpov vs Kasparov 1985. Kasparov vs Karpov 1986. GrahamClayton: Kasparov's cooments in "Umlimited Challenge": "Game sixteen, however, was one of my best in the match. 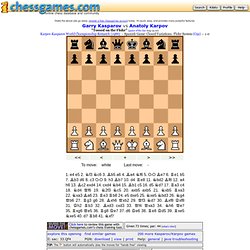 The clash of profound strategic plans, the sacrifices and counter-sacrifices, the mass of bewildering variations, all the quintessential features of a fight at the highest pitch of intensity which demands from the opponents all they have: this skirmish had it all. For a long time it seemed that Karpov's position was better. That impression was strengthened after his rook infiltrated my queenside to win my trapped knight. Until move thirty-two, the watching grandmasters were sure I was beaten. Kasparov vs Karpov 1990. Domdaniel: < "I didn't calculate," he says. 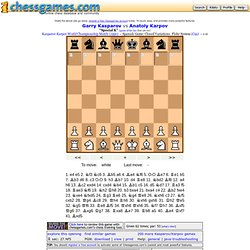 > He's exaggerating. Or simplifying, maybe even boasting a little, to give the impression of 'natural' genius. Of course he calculated: you don't play such moves on a whim, or on 'feel' alone. Not even if you're Kasparov. In video of the match you can see him calculating, on this as on later moves. He'd seen a stupendous, dazzling array of tactics -- not a single forcing line, but a whole range of different ones, starting with the truly beautiful stuff if Black takes the Knight on its first visit to h6: 26.Nxh6! Okay, so he hadn't seen *everything* through to a win, and there was intuition involved in playing 26.Nxh6. His slight slip-up near the end, playing the winning Bxg6+ rather than the crushing Rxg6, is trivial, and to criticize Kasparov for 'missing a mate' is just sad. Analysis 1. Analysis 2. Ivanchuk vs Kasparov 1991. Quenn rebirth: Kasparov vs Kramnik 1994. Nerves of steel: Aronian vs Anand 2013. Eyal: After <15...Bc5!! 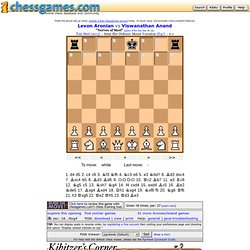