How State Tax Systems Worsen the Economic Divide – in Charts. Late last year, my colleagues and I published the sixth edition of our flagship report Who Pays: A Distributional Analysis of the Tax Systems in All 50 States. 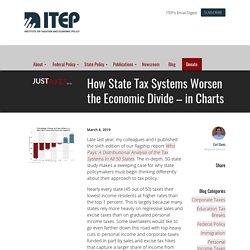 The in-depth, 50-state study makes a sweeping case for why state policymakers must begin thinking differently about their approach to tax policy. Nearly every state (45 out of 50) taxes their lowest-income residents at higher rates than the top 1 percent. This is largely because many states rely more heavily on regressive sales and excise taxes than on graduated personal income taxes. Some lawmakers would like to go even farther down this road with top-heavy cuts in personal income and corporate taxes funded in part by sales and excise tax hikes that capture a larger share of income from lower-income people.

This approach amounts to a failure by lawmakers to ensure that tax policies are serving the broad interests of all their constituents – not just the interests of families at the very top. Ocasio-Cortez's "Not At All Outlandish" Proposal for 70% Tax Rate on Uber-Wealthy Could Raise $720 Billion Over Decade. Sweden Has a 70 Percent Tax Rate and It Is Fine – People's Policy Project. Alexandria Ocasio-Cortez recently suggested raising the top tax rate to 70 percent in order to raise money to fund climate change investments. 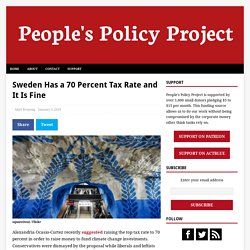 Conservatives were dismayed by the proposal while liberals and leftists generally defended the proposal by pointing to the fact that top tax rates in the US were once 91 percent and by pointing to tax scholarship that says rates that high (or even higher) are optimal. One thing missing from the discussion so far is the point that a 70 percent top tax rate exists, not merely in midcentury US tax codes or in academic papers, but also in the real world right now. Sweden has a 70 percent marginal tax rate and it kicks in, not at $10 million like AOC proposes, but at around $98,000. AOC’s proposal is quite modest by comparison. According to the OECD, single Swedish workers making over 867,000 SEK (around $98,000 at prevailing exchange rates) face a 70 percent overall marginal tax rate on all labor compensation earned above that threshold. Structure. Forbes's myth of the Reagan boom - Columbia Journalism Review.

Peter Ferrara, currently of the climate-change denying Heartland Institute and formerly of Jack Abramoff’s payroll and the Reagan and Bush I administrations, writes for Forbes that Mitt Romney will cut middle class taxes, no matter what Barack Obama’s attack ads say. 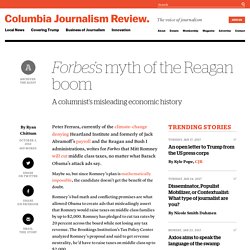 Maybe so, but since Romney’s plan is mathematically impossible, the candidate doesn’t get the benefit of the doubt. Romney’s bad math and conflicting promises are what allowed Obama to create ads that misleadingly assert that Romney would raise taxes on middle class families by up to $2,000. Romney has pledged to cut tax rates by 20 percent across the board while not losing any tax revenue. The Brookings Institution’s Tax Policy Center analyzed Romney’s proposal and said to get revenue neutrality, he’d have to raise taxes on middle class up to $2,000. You can have your own opinions on the future, of course. This is just false. And real GDP per capita grew 2.4 percent from 1947 to 1972. 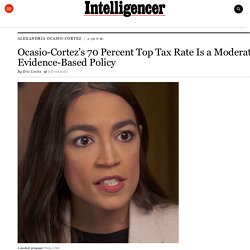 Photo: CBS When Ronald Reagan took office, affluent Americans paid a 70 percent tax rate on all income above $216,000. In the decades since, our country’s highest earners have seen their annual pay skyrocket, while the median household’s has barely budged. As a result, America’s 160,000 richest families now lay claim to 90 percent of its wealth. Studies suggest that this kind of inequality erodes social trust, abets plutocracy, and depresses economic growth. The case for trickle-down economics — which is to say, the idea that high top-marginal tax rates hurt economic growth — is much weaker now than it was in 1980. All of which is to say: In 1980, taxing incomes above $216,000 (or $658,213 in today’s dollars) at 70 percent was considered a moderate, mainstream idea, even though wage inequality was much less severe, and supply-side economics had yet to be discredited. And centrist pundits were scandalized by her extremism.

THE HISTORY OF TAXES: Here's How High Today's Rates Really Are.