Science is more beautiful than art. Hubble telescope image of the Carina Nebula, 2010. 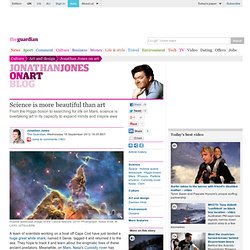 Photograph: Nasa, ESA, M LIVIO, (STScI)/EPA A team of scientists working on a boat off Cape Cod have just landed a huge great white shark, named it Genie, tagged it and returned it to the sea. They hope to track it and learn about the enigmatic lives of these ancient predators. Meanwhile, on Mars, Nasa's Curiosity rover has begun its mission to determine – metre by metre, rock by rock – whether the red planet was once able to support life. This new mission comes days after Curiosity captured a partial solar eclipse on Mars as its small moon Phobos crossed the face of the sun, appearing to take a tiny bite out of it. And in the art world … well, let's see. It has been announced that Damien Hirst got record attendances for his Tate Modern retrospective, while drawings by Andy Warhol are among works to be exhibited at the inaugural Frieze Masters art fair next month. Many projects today try to bring together art and science. BBC Nature - Crows can 'reason' about causes, a recent study finds.

18 September 2012Last updated at 07:43 A New Caledonian crow using a tool Tool-making crows have the ability to "reason", say scientists. 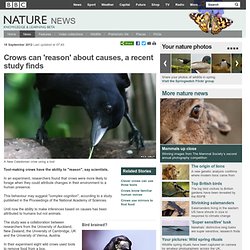 In an experiment, researchers found that crows were more likely to forage when they could attribute changes in their environment to a human presence. This behaviour may suggest "complex cognition", according to a study published in the Proceedings of the National Academy of Sciences. Until now the ability to make inferences based on causes has been attributed to humans but not animals. The study was a collaboration between researchers from the University of Auckland, New Zealand, the University of Cambridge, UK and the University of Vienna, Austria. In their experiment eight wild crows used tools to remove food from a box. 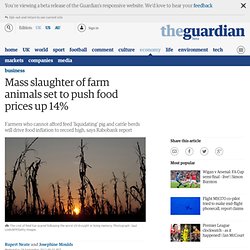 As well as hitting consumers' pockets, the predicted 14% jump in food prices will also dash the Bank of England's hopes of pushing inflation down to 2% by next year. Farmers across the world have begun a mass slaughter of their pig and cattle herds because they cannot afford the cost of feed, which has soared following the worst US drought in living memory, according to a report published on Wednesday. Experts at investment bank Rabobank warn that the mass "herd liquidation" will contribute to a 14% jump in the price of the average basket of food by next summer.

On Tuesday, the Office of National Statistics (ONS) said lower food prices had helped bring inflation down to 2.5% in August. That brings it closer to the Bank's 2% target and should help consumers who have seen their spending power shrink as wages fail to match inflation. Miriam Darlington's top 10 literary otters. A river otter pup chews on a notebook. 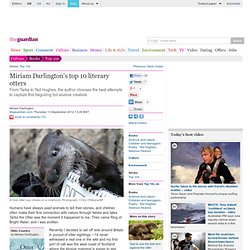 Photograph: Chris O'Meara/AP Humans have always used animals to tell their stories, and children often make their first connection with nature through fables and tales. The sixth extinction menaces the very foundations of culture. In a cave in south-west France an extinct animal materialises out of the dark. 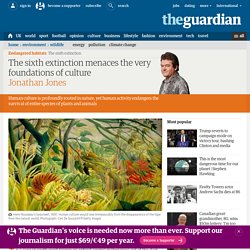 Drawn in vigorous black lines by an artist in the ice age, a woolly mammoth shakes hairs that hide its face and vaunts slender tusks that reach almost to the ground. Those tusks were not dangerous enough to save it. As human hunters advanced on its icy haunts, mammoths faced extinction between 4,000 and 10,000 years ago. 'If you want red squirrels, you have to kill greys' A red squirrel at Trewithin Gardens, Cornwall. 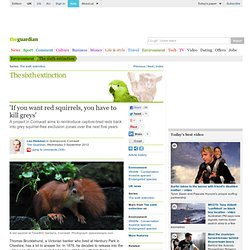 Photograph: apexnewspix.com Thomas Brocklehurst, a Victorian banker who lived at Henbury Park in Cheshire, has a lot to answer for. In 1876, he decided to release into the wild a pair of grey squirrels he had brought back with him from a business trip to America. 'A great silence is spreading over the natural world' "The birds are silent in the woods.Just wait: Soon enoughYou will be quiet too"- Robert Hass When musician and naturalist Bernie Krause drops his microphones into the pristine coral reef waters of Fiji, he picks up a raucous mix of sighs, beats, glissandos, cries, groans, tones, grunts, beats and clicks. 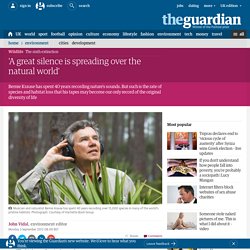 The water pulsates with the sound of creatures vying for acoustic bandwidth. He hears crustaceans, parrot fish, anemones, wrasses, sharks, shrimps, puffers and surgeonfish. Top 10 species fighting extinction with the help of zoos – in pictures. Rio+20 Earth Summit: campaigners decry final document. Amid doubt, disappointment and division, the world's governments came together in Rio on Friday to declare "a pathway for a sustainable century". 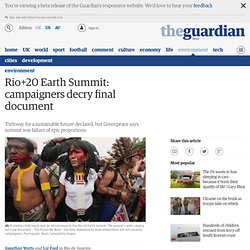 At the close of the Rio+20 Earth Summit, heads of state and ministers from more than 190 nations signed off on a plan to set global sustainable development goals and other measures to strengthen global environmental management, tighten protection the oceans, improve food security and promote a "green economy". After more than a year of negotiations and a 10-day mega-conference involving 45,000 people, the wide-ranging outcome document – The Future We Want – was lambasted by environmentalists and anti-poverty campaigners for lacking the detail and ambition needed to address the challenges posed by a deteriorating environment, worsening inequality and a global population expected to rise from 7bn to 9bn by 2050. US secretary of state Hillary Clinton said it was a time to be optimistic. "Our final document is an opportunity that has been missed. Them and us: endangered animals - in pictures. Indian state to let forest guards shoot poachers on sight.

A western Indian state has declared war on animal poaching, allowing forest guards to shoot hunters on sight to curb attacks on tigers, elephants and other wildlife. 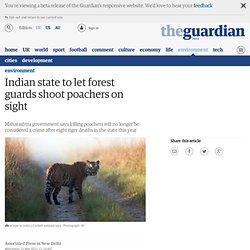 The government in Maharashtra says injuring or killing suspected poachers will no longer be considered a crime. Forest guards should not be "booked for human rights violations when they have taken action against poachers", the Maharashtra forest minister, Patangrao Kadam, said on Tuesday. The state will also send more rangers and jeeps into forests, and will offer secret payments to informers who give tips about poachers and animal smugglers, he said.

'Asian unicorn' at risk of extinction from poaching, WWF warns. Poaching in Vietnam and Laos may be driving the "Asian unicorn" to extinction, warns the WWF on the twentieth anniversary of its discovery. 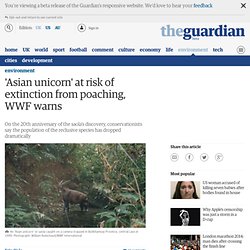 The saola is an antelope-like reclusive species that lives in remote regions of the Annamite mountains on the border of Vietnam and Laos, dubbed the Asian Unicorn because it is so rarely seen. It came to worldwide attention in 1992 as the first large mammal to be discovered in over 50 years when surveyors from the Vietnamese Ministry of Forestry and the WWF found skulls of the unknown species in mountain villages. DNA tests have indicated it is a bovine related to cattle, though it resembles a wild goat or antelope with two parallel horns found on both males and females. Now the WWF and conservation groups say populations of the saola is dropping. Estimates of the current saola population range from 10 to several hundred. Why the spoon-billed sandpiper's luck might change.

If prizes were awarded for the world's unluckiest bird, the spoon-billed sandpiper would be a leading contender. It breeds along the coast of Chukotka province, in easternmost Russia, where snow, floods and predators may foil its short window of opportunity to raise a family. If any chicks do survive, they must undertake one of the most perilous journeys of any migratory bird: 8,000km (5,000 miles) to their wintering grounds in Myanmar and Bangladesh. On the way they pass through the world's industrial powerhouses – Japan, China and South Korea – where the reclamation of coastal wetlands for economic development is proceeding at a terrifying rate. To make matters worse, if the sandpipers do reach their wintering grounds, poor local communities trap them for food.

It's hardly surprising the spoon-billed sandpiper is heading for extinction.