The warming wine regions. Napa Valley’s premium wine production could be cut in half in the next 30 years, according to a recent study by Stanford University. 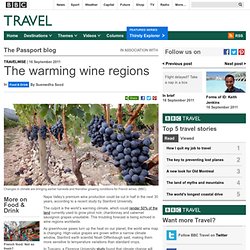 The culprit is the world’s warming climate, which could render 50% of the land currently used to grow pinot noir, chardonnay and cabernet sauvignon grapes unsuitable. This troubling forecast is being echoed in wine regions worldwide. As greenhouse gases turn up the heat on our planet, the world wine map is changing. High-value grapes are grown within a narrow climate window, Stanford earth scientist Noah Diffenbaugh said, making them more sensitive to temperature variations than standard crops. In Tuscany, a Florence University study found that climate change will result in both increased temperatures and increased rain intensity, which could damage such wines as Chianti, Barolo, Brunello and Amarone. There are some wine regions, however, which stand to gain from global warming.

'No substitute' for virgin forest. 15 September 2011Last updated at 08:33 By Richard Black Environment correspondent, BBC News Deforestation of the Amazon basin is anything but a bright dawn for wildlife in it The crucial role that virgin forests play in conserving nature is confirmed in a study that spans the tropics. 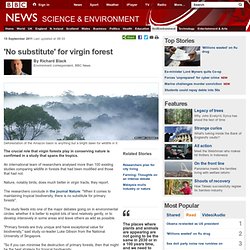 An international team of researchers analysed more than 100 existing studies comparing wildlife in forests that had been modified and those that had not. UK joins laser nuclear fusion project. 9 September 2011Last updated at 05:34 By Jason Palmer Science and technology reporter, BBC News Hiper already has a vision for how fusion energy could be harnessed and distributed The UK has formally joined forces with a US laser lab in a bid to develop clean energy from nuclear fusion. 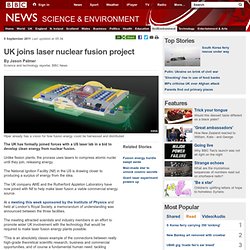 Unlike fission plants, the process uses lasers to compress atomic nuclei until they join, releasing energy. Rainbow Warrior and the launch of direct green action. By Alizeh Kohari BBC News. 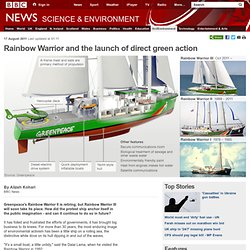 BBC Nature - Wildlife 'crash' in the Mara region of Kenya, Africa. 2 June 2011Last updated at 10:00 By Matt Walker Editor, BBC Nature African buffalo are all but gone Populations of wildlife species in the world-renowned Masai Mara reserve in Kenya have crashed in the past three decades, according to research published in the Journal of Zoology. 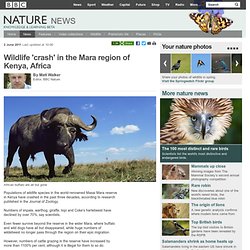 Numbers of impala, warthog, giraffe, topi and Coke's hartebeest have declined by over 70%, say scientists. Hedge funds 'grabbing land' in Africa. 8 June 2011Last updated at 19:57 Foreign firms are snapping up farming land in Africa, a new report says Hedge funds are behind "land grabs" in Africa to boost their profits in the food and biofuel sectors, a US think-tank says. 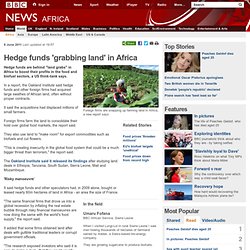 In a report, the Oakland Institute said hedge funds and other foreign firms had acquired large swathes of African land, often without proper contracts. It said the acquisitions had displaced millions of small farmers. Foreign firms farm the land to consolidate their hold over global food markets, the report said. Actress Cate Blanchett sparks Australia climate debate. 30 May 2011Last updated at 04:27 By Nick Bryant BBC News, Sydney Cate Blanchett features in a new TV advert urging Australians to "Say Yes" to a tax on carbon The Australian actress Cate Blanchett has been criticised for appearing in a television advertisement calling for the introduction of a carbon tax. 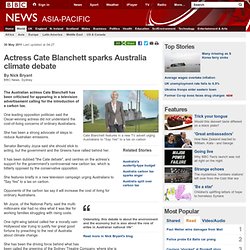 One leading opposition politician said the Oscar-winning actress did not understand the cost-of-living concerns of ordinary Australians. She has been a strong advocate of steps to reduce Australian emissions. Senator Barnaby Joyce said she should stick to acting, but the government and the Greens have rallied behind her. US economy: New Obama plan to tax wealthiest. 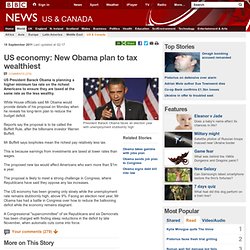 White House officials said Mr Obama would provide details of his proposal on Monday when he reveals his long-term plan to reduce the budget deficit. Wolf makes a comeback in France. 6 September 2011Last updated at 09:49 By Christian Fraser BBC News, Hautes Alpes. 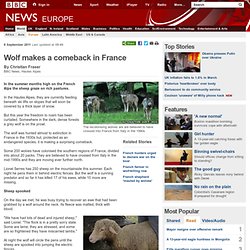 'Wi-fi refugees' shelter in West Virginia mountains. 12 September 2011Last updated at 22:45 ET By Jane O'Brien & Matt Danzico BBC News, Green Bank Dozens of Americans who claim to have been made ill by wi-fi and mobile phones have flocked to the town of Green Bank, West Virginia There are five billion mobile phone subscriptions worldwide and advances in wireless technology make it increasingly difficult to escape the influence of mobile devices. 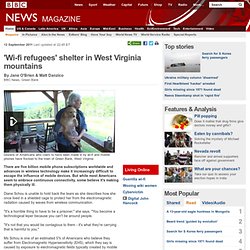 Google begins Amazon river Street View project. Botswana bets on technology to save rural economies. 2 August 2011Last updated at 10:20 By Egon Cossou Editor, Africa Business Report, BBC World News. Environment: The case against protection. 29 July 2011Last updated at 13:54 This will be the last post for a few weeks as holidays beckon. So why not leave you with perhaps the biggest question in the environmental book - where is the natural world heading, if nothing much changes?

Simply protecting land and sea won't be enough to stem the loss of nature, according to a study just out in the Marine Ecology Progress series. Read it one way, and it's one of the most depressing things you'll have seen, if you're concerned about the biosphere's future. Currently, about 13% of the world's land surface is under some form of protection, about half of which is under what a recent study evaluated as "strict" protection.

Direct - Elephants and eco-tourism in northern Sumatra. Tourists can help at elephant camp bath time on the outskirts of Gunung Leuser National Park in northern Sumatra They trundled over the rocky path, meandering down towards the river just after daybreak, a single file procession of majestic grey beasts linked by trunks and tails. The seven adult elephants and two small calves play like mischievous children, spraying their handlers with water through their trunks and then falling, almost comically sideways, splashing and submerging their mammoth bodies into the cool river. It's bath time at the elephant camp on the outskirts of Gunung Leuser National Park in northern Sumatra - and tourists are allowed to help. The mahouts, or elephant trainers, will give you a scrubbing brush, as their grey charge lies on her side to let the ritual begin. The skin is leathery and tough to touch, and it's a little disconcerting to be brushing with such force, yet clearly the elephants enjoy the vigorous scouring, dousing and overall attention.

Brazil's Amazon settlers 'scratching out a living' 5 July 2011Last updated at 01:23 By Robin Lustig The World Tonight, Mato Grosso The rate of deforestation in the Amazon has suddenly increased this year The charred tree stumps in the Amazon rain forest tell their own story. World's oceans in 'shocking' decline. 20 June 2011Last updated at 13:24 By Richard Black Environment correspondent, BBC News Coral reefs are subject to "multiple stressors" that could destroy many within a human generation The oceans are in a worse state than previously suspected, according to an expert panel of scientists.

In a new report, they warn that ocean life is "at high risk of entering a phase of extinction of marine species unprecedented in human history". They conclude that issues such as over-fishing, pollution and climate change are acting together in ways that have not previously been recognised. The impacts, they say, are already affecting humanity. Rice, straw and coconut the new alternatives to wood. Renewables can fuel society, say world climate advisers.