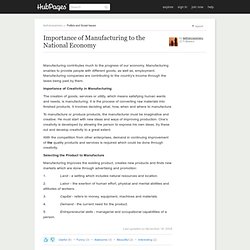 Manufacturing enables to provide people with different goods, as well as, employment. Manufacturing companies are contributing to the country's income through the taxes being paid by them. Does America need an industrial policy. Editor's Note: Be sure to catch GPS every Sunday at 10a.m. and 1p.m. 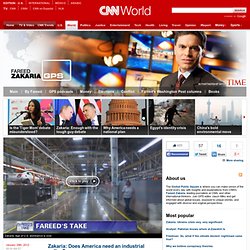 EST. If you miss it, you can buy episodes on iTunes. By Fareed Zakaria, CNN President Obama spoke forcefully in his State of the Union about the importance of reviving manufacturing in America. If you talk with economists they will tell you it's a very complex problem, involving tax, trade regulatory policy, exchange rates, and educational skills. But when you move from high-level policy to specific cases, you will often find one element that is rarely talked about: a foreign government’s role in boosting its domestic manufacturers with specific loans, subsidies, streamlined regulations and benefits.

In a front page story last week, the New York Times detailed how Apple's iPhone ended up being made outside America. Laura D'Andrea Tyson: Why Manufacturing Still Matters. Laura D’Andrea Tyson is a professor at the Haas School of Business at the University of California, Berkeley, and served as chairwoman of the Council of Economic Advisers under President Clinton. 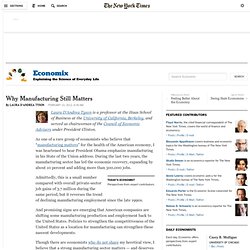 As one of a rare group of economists who believe that “manufacturing matters” for the health of the American economy, I was heartened to hear President Obama emphasize manufacturing in his State of the Union address. During the last two years, the manufacturing sector has led the economic recovery, expanding by about 10 percent and adding more than 300,000 jobs. Admittedly, this is a small number compared with overall private-sector job gains of 3.7 million during the same period, but it reverses the trend of declining manufacturing employment since the late 1990s. And promising signs are emerging that American companies are shifting some manufacturing production and employment back to the United States. American leadership in science and technology remains highly dependent on R. John Hofmeister: The U.S. Needs an Industrial Policy. Dipp.nic.in/English/Policies/industrialPolicy.pdf. Cameron Calls for “Modern Industrial Strategy” to Help Britain Win Race for Global Innovation Advantage.

In his November 12th Lord Mayor’s Banquet Speech, Conservative Party leader David Cameron—acknowledging that “Britain is in a global race that is a moment of reckoning for every country” (as ITIF argues in Innovation Economics: The Race for Global Advantage)—called on Britain to unabashedly articulate a “modern industrial strategy” to help Britain “compete and win” in the intense global race “for high-knowledge, high-value goods and jobs.” 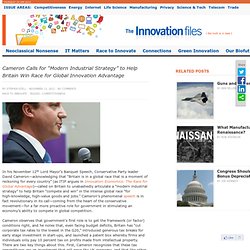 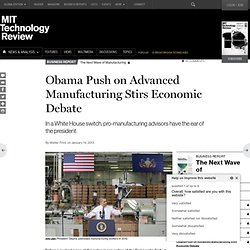 Before a packed arena at the national convention of the Democratic Party in September, Barack Obama outlined a vision for America’s economic recovery with manufacturing as its engine. “After a decade of decline, this country created over half a million manufacturing jobs in the last two and a half years,” Obama told the cheering crowd in Charlotte, North Carolina. “If we choose this path, we can create a million new manufacturing jobs in the next four years.” To fulfill those promises, the White House is turning to an economic tool not seen in Washington for years: industrial policy. Emboldened by a new cadre of advisors, the Obama administration has proposed policies to boost domestic manufacturing—tax breaks, new R&D spending, and vocational training for two million workers in areas including advanced technologies like batteries, computing, aerospace, and robotics. 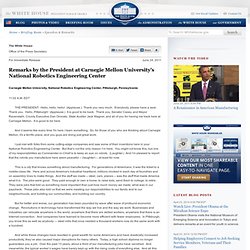 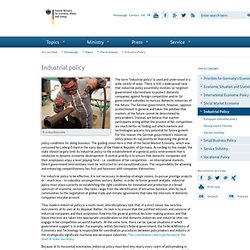 There is still a widespread view that industrial policy essentially involves (a) targeted government interventions to protect domestic companies against foreign competition and/or (b) government subsidies to nurture domestic industries of the future. The German government, however, opposes protectionism in general and takes the position that markets of the future cannot be determined by policymakers.

Instead, we believe that market participants acting within the process of fair competition are much better at finding out which markets and technologies possess key potential for future growth. For this reason, the German government's industrial policy places its top priority on improving the general policy conditions for doing business. The global revival of industrial policy: Picking winners, saving losers. Www.meti.go.jp/english/policy/economy/pdf/Vision_Outline.

Industrial Strategy: Cable outlines vision for future of British industry - Speeches. Today is an opportunity to set out an industrial strategy following the comments in Parliament yesterday. 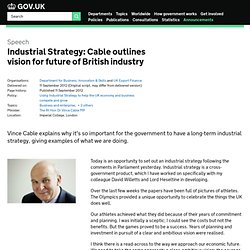 Industrial strategy is a cross-government product, which I have worked on specifically with my colleague David Willetts and Lord Heseltine in developing. Over the last few weeks the papers have been full of pictures of athletes. The Olympics provided a unique opportunity to celebrate the things the UK does well. Our athletes achieved what they did because of their years of commitment and planning. I was initially a sceptic; I could see the costs but not the benefits. I think there is a read-across to the way we approach our economic future. When I worked in industry, I worked in an oil company and we planned much more than five years in advance. Some will always say the best thing - the only thing - the government can do is get out of the way, laissez-faire. I have made it clear how much I disagree. France unveils sweeping plan to revive flagging industrial base.