What went wrong? A withering West. Twenty-five years ago, the United States emerged victorious at end of the Cold War. 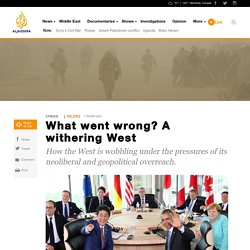 The Soviet Union imploded. European countries eagerly signed up to join a political union and common currency. NATO turned its eyes to the former Eastern Bloc countries to see which ones would join their alliance. The US vision of free trade and liberal democracy has become the hallmark of globalisation. It was a happy ending to half a century of conflict. Now, pretty much all of a sudden, it all seems to have stalled - or worse, appears to be going in reverse. All this, plus his adoration of Vladimir Putin, makes it look as if the grand ideals of the West have severely frayed and the fabric is unravelling before our eyes.

What went wrong? My first impulse is to pause, and to say "don't jump to conclusions". The West has always fed on crisis and competition. Yet, the unease does not disappear. Who could've imagined it, let alone predicted it? In fact, many did. Strategic arrogance Economic arrogance. Growing food with seawater and solar power - News from Al Jazeera. In a desert region of southern Australia is a farm that - without the use of soil, fresh water, or fossil fuels - grows and supplies 15 percent of the entire country's tomatoes through state-of-the-art technology. 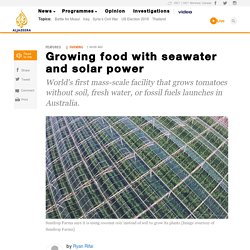 Earlier this month Sundrop Farms marked the launch of what it called the "first commercial-scale facility of this calibre in the world", which uses solar power to de-salinate seawater and operate greenhouses in order to grow more than 15,000 tonnes of the red fruit each year. Their tomatoes are being sold in hundreds of markets across the country. In a statement released on Ocober 6, the company said in comparison to conventional greenhouse farms, its "cutting-edge, sustainable technology" will save significant amounts of natural resources and avoid a substantial level of pollution.

"Approximately 26,000 tonnes of carbon dioxide per year" would be avoided, which is "equivalent to removing 500 cars from our roads", it said. READ MORE: Australia's rising solar power revolution. Val Plumwood - Wikipedia. Val Plumwood (11 August 1939 – 29 February 2008) was an Australian ecofeminist philosopher and activist known for her work on anthropocentrism. 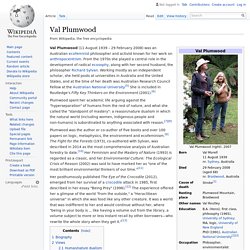 From the 1970s she played a central role in the development of radical ecosophy, along with her second husband, the philosopher Richard Sylvan. Working mostly as an independent scholar, she held posts at universities in Australia and the United States, and at the time of her death was Australian Research Council Fellow at the Australian National University.[5] She is included in Routledge's Fifty Key Thinkers on the Environment (2001).[6] Plumwood spent her academic life arguing against the "hyperseparation" of humans from the rest of nature, and what she called the "standpoint of mastery": a reason/nature dualism in which the natural world (including women, indigenous people and non-humans) is subordinated to anything associated with reason.[7][8] Biography[edit] Plumwood resumed her studies and graduated with first-class honours in 1965. 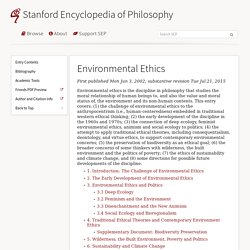 Introduction: The Challenge of Environmental Ethics Suppose putting out natural fires, culling feral animals or destroying some individual members of overpopulated indigenous species is necessary for the protection of the integrity of a certain ecosystem. Will these actions be morally permissible or even required? Is it morally acceptable for farmers in non-industrial countries to practise slash and burn techniques to clear areas for agriculture? Consider a mining company which has performed open pit mining in some previously unspoiled area. In the literature on environmental ethics the distinction between instrumental value and intrinsic value (in the sense of “non-instrumental value”) has been of considerable importance. When environmental ethics emerged as a new sub-discipline of philosophy in the early 1970s, it did so by posing a challenge to traditional anthropocentrism. 2. The new field emerged almost simultaneously in three countries—the United States, Australia, and Norway.

The 50 best documentaries of all time.