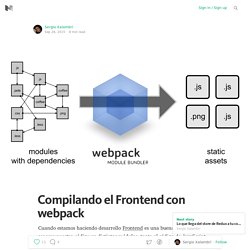 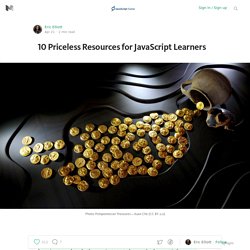 He has contributed to software experiences for Adobe Systems, Zumba Fitness, The Wall Street Journal, ESPN, BBC, and top recording artists including Usher, Frank Ocean, Metallica, and many more. He spends most of his time in the San Francisco Bay Area with the most beautiful woman in the world. Eric Elliot – Learn JavaScript. Tutorial. FREE App Creator. Create Apps for Android. No Coding Required. ReactJS Program: Learn React.js and the React.js ecosystem. Carrera de Frontend Profesional. Free Code Camp. 5 Steps for Learning React Application Development - Telerik Developer Network. Getting going with React can sometimes be overwhelming. 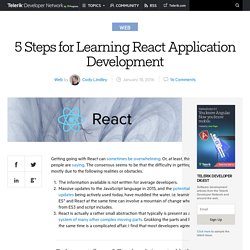 Or, at least, this is what people are saying. The consensus seems to be that the difficulty in getting going is mostly due to the following realities or obstacles. The information available is not written for average developers.Massive updates to the JavaScript language in 2015, and the potential future updates being actively used today, have muddied the water. i.e. learning ES6 & ES* and React at the same time can involve a mountain of change when coming from ES3 and script includes.React is actually a rather small abstraction that typically is present as a cog in a system of many other complex moving parts.

Grokking the parts and React at the same time is a complicated affair. 9 things every React.js beginner should know - Cam Jackson. I've been using React.js for about 6 months now. 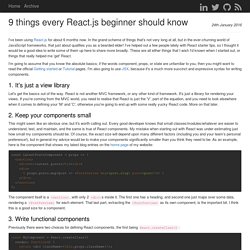 In the grand scheme of things that's not very long at all, but in the ever-churning world of JavaScript frameworks, that just about qualifies you as a bearded elder! I've helped out a few people lately with React starter tips, so I thought it would be a good idea to write some of them up here to share more broadly. These are all either things that I wish I'd known when I started out, or things that really helped me 'get' React. I'm going to assume that you know the absolute basics; if the words component, props, or state are unfamiliar to you, then you might want to read the official Getting started or Tutorial pages. ESNext: "New School" JavaScript Made Easy. Technologies @pearltrees. Aprende ECMAScript 6 (ES6), el nuevo estándar de JavaScript. ECMAScript v6 (Abreviado como ES6 o ES2015) es el estándar que seguirá JavaScript a partir de Junio de este año (2015). 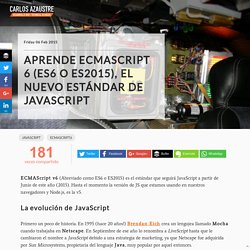 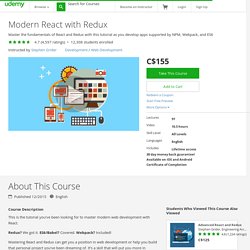 Redux? We got it. ES6/Babel? Covered. React Lessons - Screencast Video Tutorials. Anti-Education, by Friedrich Nietzsche review: a colossus warms up to replace God. Book Title:Anti-Education: On the Future of Our Educational Institutions Author:Friedrich Nietzsche Translated by Damion Searles Publisher: NYRB Classics Guideline Price:£8.99 In Friedrich Nietzsche’s final book, Ecce Homo, the chapter titles alone indicate Conor McGregor levels of megalomania: ‘Why I Am a Destiny’; ‘Why I Am So Wise’; ‘Why I Write Such Excellent Books’. 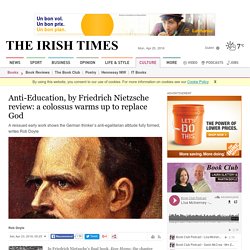 In an unpublished earlier draft of the same work, we find one of the most jaw-dropping statements ever written: “Well and good, very good in fact: after the old God is abolished, I am ready to rule the world.” Nietzsche took control; the 20th century was his. In the grand narrative of western philosophy, Nietzsche is to modernity what Plato was to antiquity: the touchstone, the colossus, a figure of such revolutionary impact that for a long time everything else was essentially a commentary on him.

Who would not be seduced by the myth? Learn JavaScript and build apps using jQuery, React, and Firebase! Are you ready to build web applications purely with JavaScript, using the hippest framework and realtime technologies? 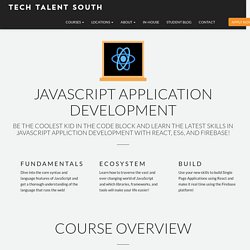 Then hop on into Tech Talent South's JavaScript Application Development course! This course is designed to be a 10-week, hands-on foundation in modern web application development with JavaScript. In the course, you'll begin with pure JavaScript fundamentals and concepts, and will quickly accelerate to building 'Single Page Applications' with JavaScript a new and popular framework built by Facebook, called React.

By the end of the course, students will be building fully functional, real-time, JavaScript based web applications. Simbla: A Next Generation Responsive Website Builder. As web developers, many of us have taken a peek at using a website builder. 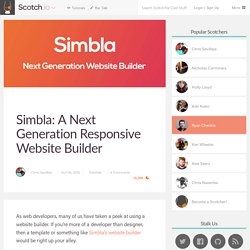 If you’re more of a developer than designer, then a template or something like Simbla’s website builder would be right up your alley. While there are many options out there for website builders, one of the newest to hit the market is Simbla. Don’t let their youth fool you though, Simbla offers one of the best website building experiences available. # Main Features Simbla offers a lot of great features such as: Built on Bootstrap 3Web based interface (no installs necessary)Drag and drop site builderFully responsiveAbility to embed your own codeSEO featuresEasy mode and a pro mode for those that still want to dive into the code Drag and Drop Simbla makes it easy for those that don’t want to deal with the HTML/CSS side of things to drag and drop exactly the website they want.