Product Strategy Means Saying No. If you’re building a product, you have to be great at saying No. 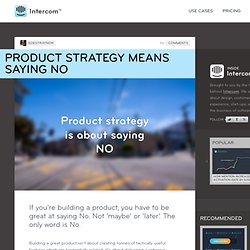 Not ‘maybe’ or ‘later’. The only word is No. Building a great product isn’t about creating tonnes of tactically useful features which are tangentially related. Silicon Valley dreams of secession. When Silicon Valley executives start borrowing metaphors from “The Godfather” maybe we should start to pay closer attention.

On Oct. 19, while laying out his vision for the techno-utopian future, Balaji Srinivasan, the co-founder of a genomics company that does DNA testing, compared Silicon Valley’s impact on the established power centers and industries of the United States to that infamous scene in which the Mafia convinces an L.A. studio boss to give a coveted movie role to a friend of la famiglia. When Freemium Fails. The Optimizing for Happiness Business Plan. This is a guest post by Jennifer Rullmann. 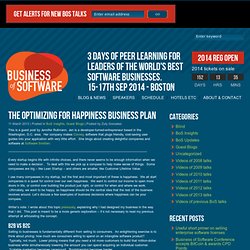 Jen is a developer-turned-entrepreneur based in the Washington, D.C. area. Her company makes Convey, software that plugs friendly, cost-saving user guides into your application with very little effort. She blogs about creating delightful companies and software at Software Smitten. Remember the good old days of Webvan? Instacart does. Long, Slow, SaaS Ramp of Death Gail Goodman Constant Contact. Jason Fried: Why work doesn't happen at work. 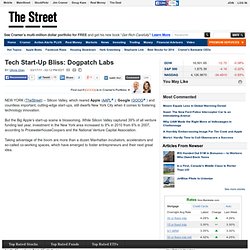 But the Big Apple's start-up scene is blossoming. While Silicon Valley captured 39% of all venture funding last year, investment in the New York area increased to 9% in 2010 from 6% in 2007, according to PricewaterhouseCoopers and the National Venture Capital Association. Taking advantage of the boom are more than a dozen Manhattan incubators, accelerators and so-called co-working spaces, which have emerged to foster entrepreneurs and their next great idea. 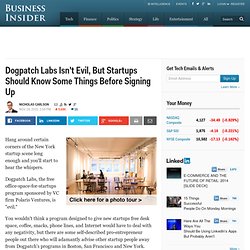 Dogpatch Labs, the free office-space-for-startups program sponsored by VC firm Polaris Ventures, is "evil. " You wouldn't think a program designed to give new startups free desk space, coffee, snacks, phone lines, and Internet would have to deal with any negativity, but there are some self-described pro-entrepreneur people out there who will adamantly advise other startup people away from Dogpatch's programs in Boston, San Francisco and New York. Their charges: Joining Dogpatch will make it harder for your startup to raise money. Dogpatch will expose the ideas and tactics behind your startup to your competition. The bar for success in our industry is too low by Jason Fried of 37signals. This weekend the New York Times published a piece called Using ‘Free’ to Turn a Profit. 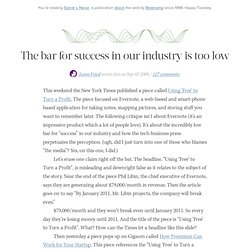 The piece focused on Evernote, a web-based and smart-phone based application for taking notes, snapping pictures, and storing stuff you want to remember later. The following critique isn’t about Evernote (it’s an impressive product which a lot of people love). It’s about the incredibly low bar for “success” in our industry and how the tech-business press perpetuates the perception. The Reason Silicon Valley Hasn't Built a Good Health App - Kanyi Maqubela. Homogenous teams of innovators make products for people just like them. And that's a problem. Many great innovators build what they know, for who they know. Aaron Sorkin caricatured this concept with his treatment of the Facebook story: Mark Zuckerberg (Jesse Eisenberg) built an online social network drawing from his own experiences and social network in real life.

With consumer web products, given how young the industry is, domain expertise rarely refers to years of experience. An expert might be someone who has loved internet technology since childhood, tinkering with Javascript and LED displays after school. Over the past couple of years, some of these entrepreneurs have begun building products focused on the quantified self. The Jig Is Up: Time to Get Past Facebook and Invent a New Future - Alexis C. Madrigal. After five years pursuing the social-local-mobile dream, we need a fresh paradigm for technology startups. 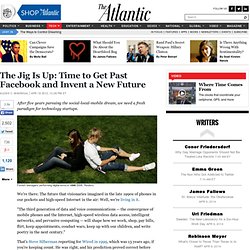 Are coders worth it? There’s this great moment in the documentary Jiro Dreams of Sushi (2011) when the world’s most celebrated sushi chef turns to his son, who is leaving to start his own restaurant, and says: ‘You have no home to come back to.’ 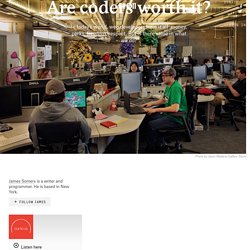 Which, when you think about it, isn’t harsh or discouraging but is in fact the very best thing you could say to someone setting out on an adventure. Last October I quit my job to become a freelance journalist. Dealing with critical issues, outages, and crises. Long, Slow, SaaS Ramp of Death Gail Goodman Constant Contact.