People's Assemblies Network. To Market, To Market with San Diego Foodstuff: Dine on the Dock to Support Local Fishermen. At one time, San Diego had a bustling fishing industry, luring immigrants from Italy, China, Japan, and Portugal. 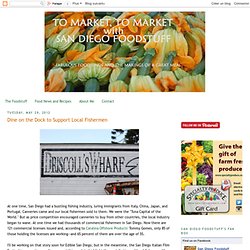 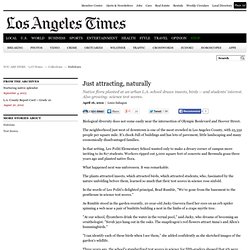 The neighborhood just west of downtown is one of the most crowded in Los Angeles County, with 25,352 people per square mile. It's chock-full of buildings and has lots of pavement, little landscaping and many economically disadvantaged families. In that setting, Leo Politi Elementary School wanted only to make a dreary corner of campus more inviting to its 817 students. Workers ripped out 5,000 square feet of concrete and Bermuda grass three years ago and planted native flora. Growing Cities Movie. Strategies for a New Economy. Thank you to all of the participants who brought the conference to life over social media. 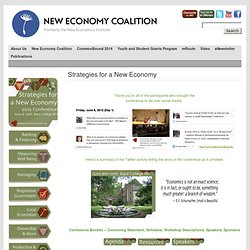 Here's a summary of the Twitter activity telling the story of the conference as it unfolded. Conference Booklet -- Convening Statement, Schedule, Workshop Descriptions, Speakers, Sponsors What would an economy built on principles of fairness and sustainability look like? Links. OccupyArrests.com | Zinn said that the problem in this country is not civil disobedience, it’s civil obedience. 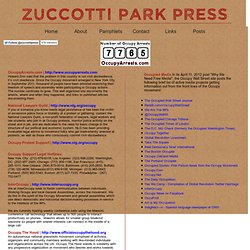 Since the Occupy movement emerged in New York City in September 2011, thousand of people have been arrested exercising their freedom of speech and assembly while participating in Occupy actions. Economic Development. Featured Items Photo Carousel Business Resource Guide. 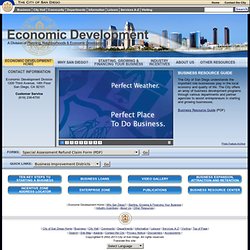 BREAKING NEWS -Redevelopment Housing Funds Swept Away in Governor's Revised Budget. Cities Using Deposits to Gain Leverage Over Banks. Cities across the country are trying to send a message to financial institutions: If you want our business, you’ve got to play ball. 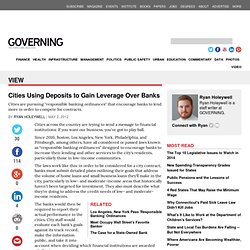 Since 2010, Boston, Los Angeles, New York, Philadelphia, and Pittsburgh, among others, have all considered or passed laws known as “responsible banking ordinances” designed to encourage banks to increase their lending and other services to the city's residents, particularly those in low-income communities. The laws work like this: in order to be considered for a city contract, banks must submit detailed plans outlining their goals that address the volume of home loans and small business loans they'll make in the city, particularly in low- and moderate-income areas that historically haven’t been targeted for investment.

Do Tank and the Democracy Design Workshop. The Short Description: The goal of the Virtual Company Project is to build online tools to help groups create and implement governance rules necessary for successful collaboration. 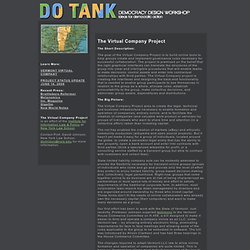 The project is premised on the belief that the right graphical interfaces can translate the structures of the group into clear and intelligible procedures that will enable teams to make decisions, control assets and enter into contractual relationships with third parties. The Virtual Company project is creating the interfaces and designing the back-end functionality that is needed to enable group participants to see themselves in relation to the group as a whole, allocate roles, establish accountability to the group, make collective decisions, and administer group assets, expenditures and distributions. The Big Picture:

Mindful Eating as Way to Fight Bingeing. 8 Crowd Insights From 8 Crowdsourcing Workshops. Editor's Note: The following comes to us from Ross Dawson, author of "Getting Results From Crowds;" it was originally posted on the book's website and is re-posted here with permission. 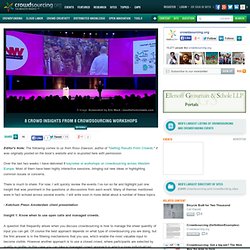 Over the last two weeks I have delivered 8 keynotes or workshops on crowdsourcing across Western Europe. Most of them have been highly interactive sessions, bringing out new ideas or highlighting common issues or concerns. There is much to share. For now, I will quickly review the events I’ve run so far and highlight just one insight that was prominent in the questions or discussions from each event. Many of themes mentioned were in fact echoed across several events. 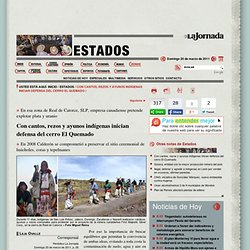 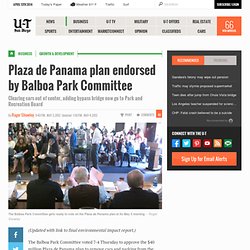 The Balboa Park Committee voted 7-4 Thursday to approve the $40 million Plaza de Panama plan to remove cars and parking from the middle of the park. The committee acted after a nearly three-hour meeting, during which supporters and opponents were almost evenly divided over many details, particularly the idea of adding a bypass bridge off the Cabrillo Bridge on the western side to divert traffic toward an 800-car garage south of the Spreckels Organ Pavilion.

The plan now goes to the Historic Resources Board, Park and Recreation Board and Planning Commission before final action by the City Council in July. The commission had held a workshop on the plan earlier Thursday but took no action. Thefinal environmental impact report is expected to be posted at 5 p.m. Ideasfestival.co. Timeline: Plaza de Panama. Sustainable Economies Law Center. San Diego, April 20 – 22. Collaborative Services.

Top Ten Highlights of Cleantech in San Diego, California. UCSD goal: world-class health care. UC San Diego officials brought out the champagne and ceremonial shovels Monday for a groundbreaking on the $664 million Jacobs Medical Center, but they really were celebrating something far bigger than the start of construction on a 10-story building. University officials said they’re taking the next step on the way to their goal of being a world-class academic medical institution combining research, a school of medicine and advanced clinical care. Irwin and Joan Jacobs at the groundbreaking for the UC San Diego Jacobs Medical Center in La Jolla that also contributed to. . — Peggy Peattie Note: This story has corrected an earlier version that included the wrong first name for Dr. Why Young Americans Are Driving So Much Less Than Their Parents - Commute. “Unfortunately for car companies,” Jordan Weissmann noted at TheAtlantic.com a couple weeks back, “today's teens and twenty-somethings don't seem all that interested in buying a set of wheels.

They're not even particularly keen on driving.” Now a major new report from Benjamin Davis and Tony Dutzik at the Frontier Group and Phineas Baxandall, at the U.S. PIRG Education Fund, documents this unprecedented trend across a wide variety of indicators. Their two big findings about young people and driving: The average annual number of vehicle miles traveled by young people (16 to 34-year-olds) in the U.S. decreased by 23 percent between 2001 and 2009, falling from 10,300 miles per capita to just 7,900 miles per capita in 2009. Washington, D.C.'s Tourist Trap - Arts & Lifestyle. Omidyar Network. Permaculture Principles.

Documenting our global transformation towards a sustainable future. After eight years of work that enlisted a small army of contributors, Sustainable [R]evolution: Permaculture in Ecovillages, Urban Farms, and Communities Worldwide, is now in print! It looks gorgeous, thanks to the high-quality recycled matte paper the press used to showcase Erika Rand‘s incredible design, and includes thousands of color photos of inspiring sites all around the globe. We are also very honored to have had environmentalist Paul Hawken write the book’s compelling foreword, and to have included work by luminaries such as David Holmgren (co-founder of the permaculture concept), Starhawk, and Dr.Vandana Shiva.

The $4 Billion Mom Brigade « Collaborative Services. Breakthrough Journal: Issue 2 Archives. Breakthrough Journal: Debates : Conservation for the Real World. Obesity today is described as an “epidemic,” one of the most significant health threats to Americans (especially the poor), and a rising global concern. In response, public health advocates have launched an all-out assault. They have made school lunches more nutritious, restricted access to junk food, campaigned against slickly marketed and unhealthy food, and boosted access to healthy options through farmer’s markets and grocery stores. Behind many of these efforts lies the idea that access to food is somehow to blame for obesity — namely, too much access to unhealthy foods and too little to healthy ones — and that the corporate agro-industrial complex is a major driving force behind this problem.

Home. Ryan Gosling, 'ReGENERATION' Trailer: First Look At Actor's Documentary About Today's Apathetic Youth. Lighter, Quicker, Cheaper: A Low-Cost, High-Impact Approach. As cities struggle to do more with less and people everywhere cry out for places of meaning and beauty, we have to find fast, creative, profitable ways to capitalize on local ingenuity and turn public spaces into treasured community places. Pier 1 at Brooklyn Bridge Park was a temporary park that activated the space with low-cost revenue-producing uses before today’s more expensive design could be implemented.