Our mission: To further the establishment and growth of permanent, autonomous ocean communities, enabling innovation with new political and social systems. 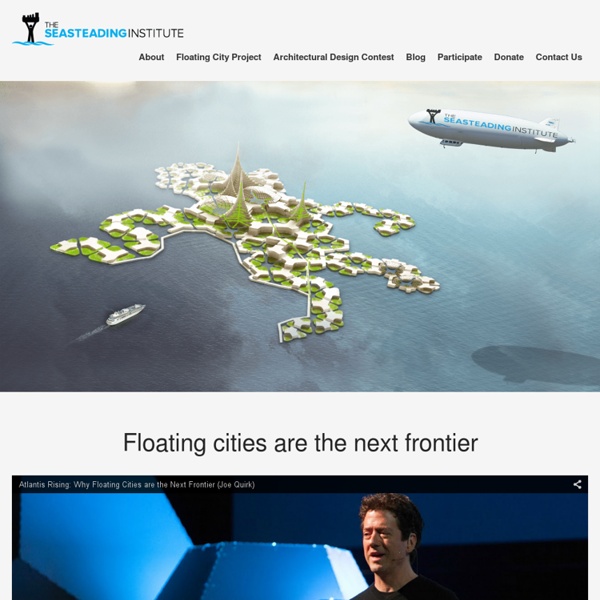 The Seasteading Institute is a nonprofit 501(c)(3), working to enable seasteading communities - floating cities - which will allow the next generation of pioneers to test new ideas for government. The most successful can then inspire change in governments around the world. Your support goes toward creating opportunities for experimentation and innovation in the political sphere, and for unprecedented personal freedom.

Purposely Marooned - 8 Westerners Go to Live Forever on a Desert Island? - Road Junky Guides Forget The Beach or Lord of the Flies, these folks really do want to make life in Paradise happen. In June 2010, 8 Westerners will go to leave civilisation behind and go to live on a tropical island. 6 are American, one English and one Spanish. It’s not a stunt, a cult or a fund-raising event for charity – they simply want to go and live by themselves in paradise. Focaliser, Daniel Nash, spoke to Road Junky about the motives and practicalities of the Purposely Marooned Project. RJ: Where and when are you going? Nash: We are due to depart end of May to the beginning of June.

Designing the World's First Floating City UPDATE JAN. 2014 Thank you to everyone who supported this effort! DeltaSync completed the final concept report in December of 2013, and it is now available for download on our website. We hope you enjoy reading it, and welcome your feedback at info@seasteading.org. We also encourage you to take our survey at floating-city.org if you would want to live on the first seastead. Designing the World's First Floating City

The Decades That Invented the Future, Part 2: 1911-1920 Today's leading-edge technology is headed straight for tomorrow's junk pile, but that doesn't make it any less awesome. Everyone loves the latest and greatest.Sometimes, though, something truly revolutionary cuts through the clutter and fundamentally changes the game. And with that in mind, Wired is looking back over 12 decades to highlight the 12 most innovative people, places and things of their day. From the first transatlantic radio transmissions to cellphones, from vacuum tubes to microprocessors, we'll run down the most important advancements in technology, science, sports and more.This week's installment takes us back to 1911-1920, when machine guns on planes were synchronized with their propellers, the Model-T came off the first assembly line and the Panama Canal was completed.We don't expect you to agree with all of our picks, or even some of them. That's fine.

Nautilus Minerals Inc. - 2012 Programs - Fri Feb 15, 2013 The focus of exploration activity in 2012 was a seismic data acquisition program on Nautilus Minerals' 100% owned exploration and mining licences in the Bismarck Sea of Papua New Guinea. This included the completion of 3D seismic surveys over Solwara 1 and Solwara 12. Data analysis and interpretation are ongoing. Following the 3D seismic survey over Solwara 1 and Solwara 12; a program of multibeam bathymetry mapping and 2D sesimic traverses commenced over other tenements in the Bismarck Sea. Inside the Spanish ghost villages you can buy for £50,000 Entire Spanish villages on sale for as little as £50,000 - £200,000 less than the average UK homeBuyers get a three-bedroom main house, five other buildings, a fresh-water spring, and 140,000sqft of farmlandOne village with six houses and 32,000sqft of land costs £75,000, the same as a Battersea parking spaceAccording to an estate agent there are around 2,900 deserted villages in rural SpainClusters of houses were left abandoned after families fled the countryside during Spain's recession By Chris Pleasance Published: 12:18 GMT, 9 March 2014 | Updated: 11:31 GMT, 10 March 2014 Rotting and abandoned, these ghostly Spanish villages were deserted during the recession as their owners fled the country to find jobs in the city. But now they are being snapped up by foreigners, a third of them British, for knock-down prices and turned into idyllic retirement properties. The kitchen of one of four empty homes in an abandoned village close to Ortiguiera

Tapping the Oceans Mineral Wealth With Deep Sea Mining No one knows how many hydrothermal vent sites are in the oceans, but there is a best guess. Amazingly, when scientists who have studied different parts of the ridge system compared notes at the April WHOI conference, they realized they were all coming up with the same distance between known, large active vent sites: 100 kilometers. If those numbers hold true, about 600 districts spewing metal-rich fluids and potentially holding sulfide deposits may decorate the mid-ocean ridge. Nautilus Minerals estimated in a September 2009 corporate presentation that "thousands of underwater sulphide systems exist," and "if only half of underwater systems are geographically viable, seafloor production would represent several billion tons of copper per annum." _Minerals from the Seafloor

biólogo advierte de las primeras etapas de la sexta extinción masiva de la Tierra July 24, 2014 Stanford Biology Professor Rodolfo Dirzo and his colleagues warn that this "defaunation" could have harmful downstream effects on human health. By Bjorn Carey Elephants and other large animals face an increased risk of extinction in what Stanford Biology Professor Rodolfo Dirzo terms "defaunation." The City as an Ecosystem Currently our urban design and development practices work within the framing of modernism, which positions humans at the centre of existence that prioritises the status of objects and operates through the technology of machines. The processes engaged by modernism involve the simplification of systems to command their obedience, without any ideological commitment to return something in exchange for their servitude. In modern cities we have delegated their development to planners, architects and engineers, assigning roles to people, as one would identify parts of a machine.

10 Estonian Startups To Watch Skype, PlayTech and Transferwise are all examples of the impact Estonian talent has had on the global tech market. But those companies aren’t headquartered in the country today and until recently the country’s startup scene has remained relatively low profile on the global stage. That is beginning to change, however, with recent investments including mobile testing firm Testlio’s USD1m and agritech firm Vitalfields’ USD1.2m helping to put Estonia on the map. With hack event organiser Garage 48, accelerator Startup Wise Guys and the pro-digital Estonian government all key players helping build out the region’s tech ecosystem, we can expect more noise coming out of the space this year. In the meantime, here are 10 of the country’s startups to watch.

Deep Sea Mining: Out Of Our Depth » Deep sea riches could spark Pacific mining boom Radio National Background BriefingAnn Arnold20 October 2013 A project to dig minerals from the seabed off Papua New Guinea could signal a new era of mining in the world’s most remote and least understood environment, the deep sea. Mining companies are excited, ecologists are worried, and struggling island nations are watching with interest, as Ann Arnold writes. One and a half kilometres below the sea, on the flank of an active volcano, hundreds of tonnes of machinery will carve up mineral-laden rock, and pump it to a ship on the surface. The entire operation will be remotely controlled from the ship.