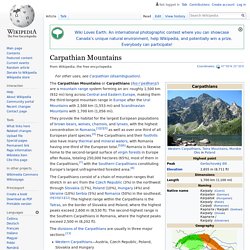 They provide the habitat for the largest European populations of brown bears, wolves, chamois and lynxes, with the highest concentration in Romania,[2][3][4] as well as over one third of all European plant species.[5] The Carpathians and their foothills also have many thermal and mineral waters, with Romania having one-third of the European total.[6][7] Romania is likewise home to the largest surface of virgin forests in Europe (excluding Russia), totaling 250,000 hectares (65%), most of them in the Carpathians,[8] with the Southern Carpathians constituting Europe’s largest unfragmented forested area.[9] Name[edit] Carpathian mountain range Geography[edit] Carpathian Mountains.

ABOUT THE CARPATHIANS - Carpathian Heritage Society. The Carpathians extend in a geologic system of parallel structural ranges. 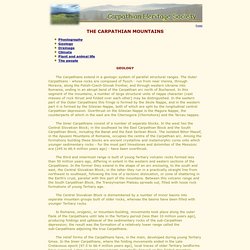 The Outer Carpathians - whose rocks are composed of flysch - run from near Vienna, through Moravia, along the Polish-Czech-Slovak frontier, and through western Ukraine into Romania, ending in an abrupt bend of the Carpathian arc north of Bucharest. In this segment of the mountains, a number of large structural units of nappe character (vast masses of rock thrust and folded over each other) may be distinguished. In the eastern part of the Outer Carpathians this fringe is formed by the Skole Nappe, and in the western part it is formed by the Silesian Nappe, both of which are split by the longitudinal central Carpathian depression.

The Carpathians. Picture on left from Picture on right from Introduction The Carpathian Mountains are an almost semicircular shaped mountain belt that is 1500km long and 50-150km wide. 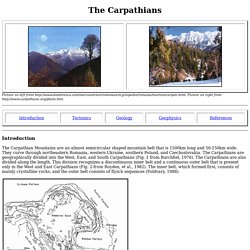 USGS FAQs - Landslides - What is a landslide and what causes one? A landslide is defined as "the movement of a mass of rock, debris, or earth down a slope" (Cruden, 1991). 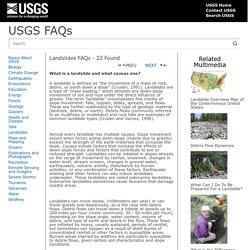 Landslides are a type of "mass wasting," which denotes any down-slope movement of soil and rock under the direct influence of gravity. Landslides 101 USGS. What is a Landslide? 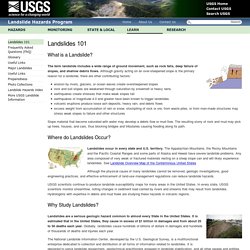 The term landslide includes a wide range of ground movement, such as rock falls, deep failure of slopes, and shallow debris flows. Although gravity acting on an over-steepened slope is the primary reason for a landslide, there are other contributing factors: erosion by rivers, glaciers, or ocean waves create oversteepened slopesrock and soil slopes are weakened through saturation by snowmelt or heavy rainsearthquakes create stresses that make weak slopes failearthquakes of magnitude 4.0 and greater have been known to trigger landslidesvolcanic eruptions produce loose ash deposits, heavy rain, and debris flowsexcess weight from accumulation of rain or snow, stockpiling of rock or ore, from waste piles, or from man-made structures may stress weak slopes to failure and other structures Slope material that become saturated with water may develop a debris flow or mud flow. Where do Landslides Occur? Landslides occur in every state and U.S. territory. Why Study Landslides? 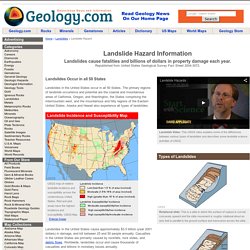 The primary regions of landslide occurrence and potential are the coastal and mountainous areas of California, Oregon, and Washington, the States comprising the intermountain west, and the mountainous and hilly regions of the Eastern United States. Alaska and Hawaii also experience all types of landslides. Landslides in the United States cause approximately $3.5 billion (year 2001 dollars) in damage, and kill between 25 and 50 people annually. Casualties in the United States are primarily caused by rockfalls, rock slides, and debris flows. The information presented here provides an introductory primer on understanding basic scientific facts about landslides-the different types of landslides, how they are initiated, and some basic information about how they can begin to be managed as a hazard.

Hazards and Mud Volcanoes in Romania - Link to article. A Landslide Susceptibility Study for Romania. Report on Landslides in Romania (we will use the map on page 24) GIS Landslide Hazard Map of Romania. Tool for Disaster Management and Spatial Planning Dan Balteanu GIS landslide-hazard maps are a common and useful tool for people involved in disaster management, spatial planning and disaster recovery, providing an image of the most susceptible areas and so enabling better pre-, during and post-event decision-making. 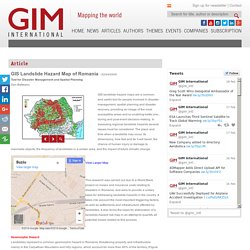 In assessing regional landslide hazards several issues must be considered. The place and time when a landslide may occur, its dimensions, how fast and far it will travel, the chance of human injury or damage to manmade objects, the frequency of landslides in a certain area, and the impact of future climatic change. View Larger Map This research was carried out due to a World Bank project on losses and insurance costs relating to disasters in Romania, and aims to provide a unitary basis for addressing landslide hazards in the country.