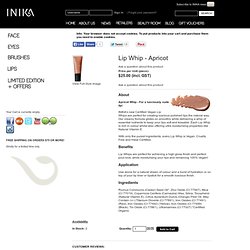 INIKA’s new Certified Vegan Lip Whips are perfect for creating luscious polished lips the natural way. Our creamy formula glides on smoothly while delivering a whip of essential nutrients to keep your lips soft and kissable. Each Lip Whip is rich in colour whilst also offering ultra moisturising properties like Natural Vitamin E. With only the purest ingredients, every Lip Whip is Vegan, Cruelty Free and Halal Certified. Benefits Lip Whips are perfect for achieving a high gloss finish and perfect pout look, while moisturising your lips and remaining 100% Vegan!

Application. Hunting - Alpine Precision Rifle Club. Hunting with Alpine Would you like to add hunting and tracking to your marksmanship skills? 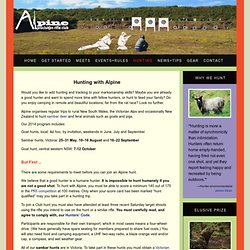 Maybe you are already a good hunter and want to spend more time with fellow hunters, or hunt to feed your family? Do you enjoy camping in remote and beautiful locations, far from the rat race? Look no further. Alpine organises regular trips to rural New South Wales, the Victorian Alps and occasionally New Zealand to hunt sambar deer and feral animals such as goats and pigs. Our 2014 program includes: Goat hunts, local: Ad hoc, by invitation, weekends in June, July and SeptemberSambar hunts, Victoria: 25–31 May, 10–16 August and 16–22 SeptemberGoat hunt, central western NSW: 7-12 October. 3 VALLEY HUNTING & TARGET CLUB. Hi all if you would like to post any photos please send in with a caption A look at our temporary shooting benches is that bacon cooked yet ?? 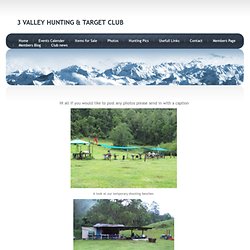 Any pics for here should be a jpeg type for easy loading Master Cook at work " yummy " Some pics of the new wall and loo from the working bee in March. A recent trip to the SSAA at Dairyville near Coffs Harbour For the ones that have not been it was my first time there and I really enjoyed it and felt welcomed. 13.02.2013 Hi Guys for the ones that don't know where to go to the SSAA Range at Dairyville head west from Coffs to Karangi at the little shop turn left and travel to Orara and turn right on to Dairyville Rd for about 4 km then you should see the sign to the SSAA range.You can zoom in on the range and have a close look at it in the satellite screen and move the map around etc ..

Riedel - Ouverture Buy 8 Get 12 Gift Pack (Made in Germany) ThisIsWhyImBroke.com. Top3 by design. Georg JensenGeorg Jensen traces its roots back to 1904 when silversmith and sculptor Georg Jensen (1866-1935) started his workshop in Copenhagen. 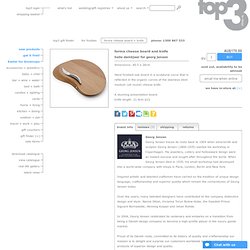 His jewellery, cutlery and hollowware design were an instant success and sought after throughout the world. When Georg Jensen died in 1935, his small workshop had developed into a world-wide company with shops in Paris, London, Berlin and New York. Inspired artistic and talented craftsmen have carried on the tradition of unique design language, craftsmanship and superior quality which remain the cornerstones of Georg Jensen today. Over the years, many talented designers have contributed to the company distinctive design and style: Nanna Ditzel, Vivianna Torun Bulow-Hube, the Swedish Prince Sigvard Bernadotte, Henning Koppel and Johan Rohde. Box contains: 8 fresh Passion fruits in the box - order passion fruit online. Whenever you visit the four corners of the world, you'll find that people in US, New Zealand, Brazil, Indonesia, Kenya and Florida are eaten the same way as passion fruit.

The Passion Fruit is one of the most exotic of all tropical fruit because of the magic of its aroma and the taste of its fruit. Where can i buy passionfruit in chicago. Jetfumes will make a personal wine bottle holder that will be one of a kind, personalized gift for. Wooden tray, white. Lilies & Peonies. Tetris Heat Change Mug - Buy your Tetris Heat Change Mug from Kogan Australia. Top3 by design - Steady Sticks - wine glass holder ss 26cm. Molecular Cuisine Starter Kit. Neato XV-21 Pet & Allergy Automatic Vacuum Cleaner: Home & Kitchen. Virtual Hair Makeover. Chicago Innovative Awards March. Kinetic Winged Rings that flap. Jeweler/metalworker Dukno Yoon makes beautiful, animated kinetic winged rings, sculptures and towers that flap when you flex your finger. 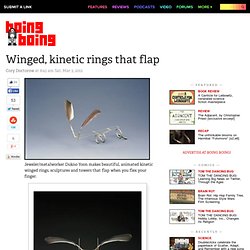 The contrast between metal structural form and natural feather, together with the repetitive and whimsical movements of fragile wings, provokes the imagination and evolves the intimate relationship between work and viewer/wearer. Although the recent series, segmented wings have been focused on the formal challenge to engineer an intricate movement that simulates bird wings, these works are intended to be a series of poems in which I develope my own formal language, interpret the nature of wings, create various structural forms with movements, and share the metaphor, imagination, humor, with viewer/wearer.