8 CLIL Teaching Techniques That’ll Work Wonders in Your Classroom. FYI: This is one of those pages where you should be using the “Bookmark” option in your browser. 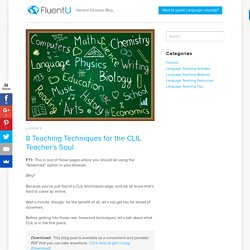 Why? Because you’ve just found a CLIL techniques page, and we all know that’s hard to come by online. Wait a minute, though, for the benefit of all, let’s not get too far ahead of ourselves. Before getting into those rare, treasured techniques, let’s talk about what CLIL is in the first place. What Is CLIL in the First Place? The term “CLIL” is generally credited to Professor David Marsh from the University of Jyväskylä, in Finland. CLIL stands for Content and Language Integrated Learning. For example, if you have an ESL class full of students from China, you’ll teach them subjects but won’t use any Chinese to do so. The subject can be about anything really: history, physics, drama, even basketball or dance. For a class of English-speaking American students, you may have CLIL classes like: Philosophy in GermanArt studies in ItalianBaking in French Not at all. Comprehensible Inputs. 511a6f426e1c12d261a9d9efab4c3ddb18ba.

FAQs - MLTAV CLIL Teachers' Network. Different types of language learning explained. During a recent workshop I received the question regarding the difference between CLIL and immersion. 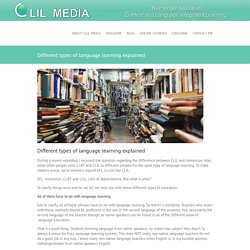 Also, some other people used CLBT and CLIL as different phrases for the same type of language learning. To make matters worse, some teachers argued EFL is a lot like CLIL. EFL, immersion, CLBT and CLIL. Lot’s of abbreviations. But what is what? To clarify things once and for all, let me help you with these different types of education. All of them have to do with language learning Just to clarify, all of these phrases have to do with language learning. That is a good thing. However, the cultural background and the use of words that might just be a little out of the ordinary are an added bonus for any second language learner. EFL: Second language learning EFL stands for English as a Foreign Language. The main difference with CLIL is simply the fact that EFL is only English. Classics between prosperity and crisis - Greek and Latin education in 21st-century Holland.

At first glance, classical education in the Netherlands seems to be in full bloom in the early 21st century. 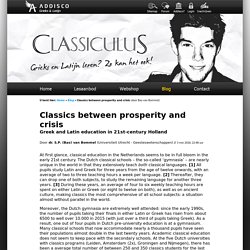 The Dutch classical schools – the so-called ‘gymnasia’ – are nearly unique in the world in that they extensively teach both classical languages. [1] All pupils study Latin and Greek for three years from the age of twelve onwards, with an average of two to three teaching hours a week per language. [2] Thereafter, they can drop one of both subjects, to study the remaining language for another three years. [3] During these years, an average of four to six weekly teaching hours are spent on either Latin or Greek (or eight to twelve on both), as well as on ancient culture, making classics the most comprehensive of all school subjects: a situation almost without parallel in the world. Latinteach Resources. SOMETHING NEW, SOMETHING OLD The Rev. 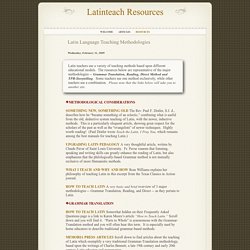 Paul F. Distler, S.J. d., describes how he “became something of an eclectic,” combining what is useful from the old, deductive system teaching of Latin, with the newer, inductive methods. This is a particularly eloquent article, showing great respect for the scholars of the past as well as the “evangelists” of newer techniques. Highly worth reading! (Paul Distler wrote Teach the Latin, I Pray You, which remains among the best manuals for teaching Latin.)

UPGRADING LATIN PEDAGOGY A very thoughtful article, written by Claude Pavur of Saint Louis University. WHAT I TEACH AND WHY AND HOW Rose Williams explains her philosophy of teaching Latin in this excerpt from the Texas Classics in Action journal. HOW TO TEACH LATIN A very basic and brief overview of 3 major methodologies -- Grammar Translation, Reading, and Direct -- as they pertain to Latin. CAMBRIDGE LATIN DISCUSSION Discussion list for the popular Reading-based curriculum. Language teaching methods. Listed below are brief summaries of some of the more popular second language teaching methods of the last half century. 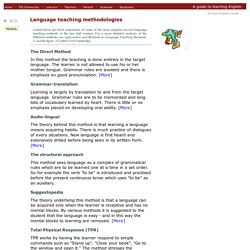 For a more detailed analysis of the different methods, see Approaches and Methods in Language Teaching Richards, J. and Rodgers, T (1986) CUP Cambridge. The Direct Method Grammar-translation Learning is largely by translation to and from the target language. Grammar rules are to be memorized and long lists of vocabulary learned by heart. Audio-lingual The theory behind this method is that learning a language means acquiring habits. The structural approach This method sees language as a complex of grammatical rules which are to be learned one at a time in a set order.

Suggestopedia The theory underlying this method is that a language can be acquired only when the learner is receptive and has no mental blocks. Total Physical Response (TPR) TPR works by having the learner respond to simple commands such as "Stand up", "Close your book", "Go to the window and open it. " Immersion.