Interview with Bruno Fernandez. Published 2015-11-09 Could you tell us something about yourself? 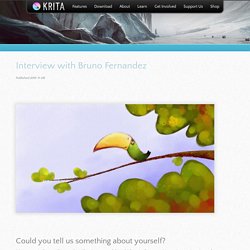 My name is Bruno Fernandez. I’m 41 years old and I live in Buenos Aires, Argentina. I work as sysadmin in a financial company in Argentina. Besides, I’m an illustrator who works in different graphic media in my country and abroad. I have a beautiful family and two children, They are called Agustina and Dante. Do you paint professionally, as a hobby artist, or both? I have been working professionally for ten years but I have always worked on setting a professional vision and genuineness to every line, every colour. Artist Interviews. 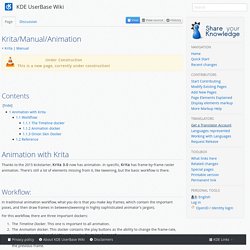 In specific, Krita has frame-by-frame raster animation. There's still a lot of elements missing from it, like tweening, but the basic workflow is there. Workflow: In traditional animation workflow, what you do is that you make key frames, which contain the important poses, and then draw frames in between(tweening in highly sophisticated animator's jargon). For this workflow, there are three important dockers: The Timeline Docker. The Timeline docker The timeline docker is not immediately obvious, because when you start drawing, this doesn't automatically create a key frame out of your drawing. So, to make our first animated layer, we need to make a key frame! To keep a layer visible in the timeline docker regardless of which layer is selected, select the layer in the layerdocker so it shows up in the docker, the rightclick it on the docker-layer list and select . 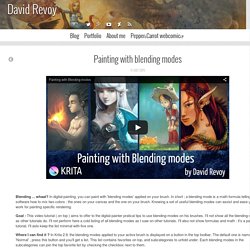 In digital-painting, you can paint with 'blending modes' applied on your brush. In short ; a blending mode is a math formula telling your software how to mix two colors : the ones on your canvas and the one on your brush. Knowing a set of useful blending modes can assist and ease your work for painting specific rendering. Krita tech demo : Transform tool. Painting with Blending-modes. Presets in Krita. Krita/Manual/Animation. Krita/Tutorial 1. Krita tutorial So why would you want to try out Krita? 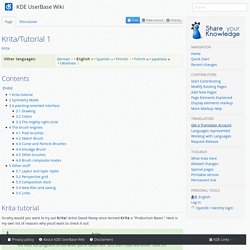 Artist David Revoy once termed Krita a "Production Beast. " Here is my own list of reasons why you'd want to check it out: Symmetry Mode I'm starting with this part because it's short. Toggle it on and off with just a button at the top Redefine the axis with Shift + R, then click Symmetry Mode + Sketch brush is what I term the "Killer combo. " 5-minute doodle. Alternatively, Krita has a Multi-brush mode, to create Kaleidoscope-like drawings. A painting-oriented interface. Krita/Tutorial 5. Tutorial: Color Smudge Brushes Krita's color smudge brush has several common elements with the Pixel Brush, but has 2 distinct features: 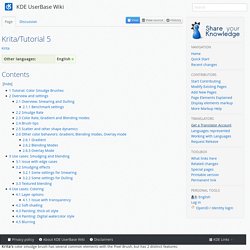 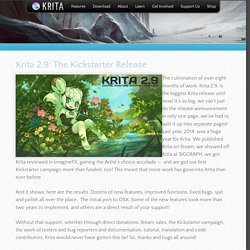 It’s so big, we can’t just do the release announcement in only one page, we’ve had to split it up into separate pages! Last year, 2014, was a huge year for Krita. We published Krita on Steam, we showed off Krita at SIGGRAPH, we got Krita reviewed in ImagineFX, gaining the Artist’s choice accolade — and we got our first Kickstarter campaign more than funded, too! This meant that more work has gone into Krita than ever before. And it shows: here are the results. Krita 2.9 Animation Edition on Ubuntu 16.04. Krita Basics Intro. Pattern and texture creation with Multibrush in Krita.

How patterns can literally save your life? 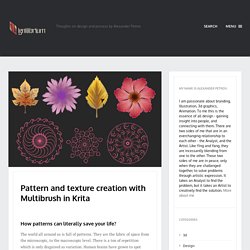 The world all around us is full of patterns. They are the fabric of space from the microscopic, to the macroscopic level. There is a ton of repetition which is only disguised as variation. Human brains have grown to spot patterns, because this is a major advantage for survival. For instance, by understanding patterns you can spot the ways that different animal furs look and distinguish a prey from a predator. Why are our brains hooked to patterns? On a more microscopic level our retinas and our brain really love patterns.

People see, people do We are all surrounded by man-made patterns – they are so easy to read. Tutorials Beginner. Overview of the Animation Toolset in Krita 2.9 Beta. The Most Powerful Features in Krita for Digital Painters / ExtremRaym. I was reading an article about Krita, a free software for making digital painting, on my friend Yann Isabel‘s Graphyz’Art website, and I decided to take a closer look to this project. 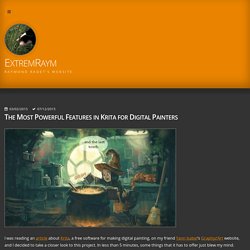 In less than 5 minutes, some things that it has to offer just blew my mind. I have showed what I found to my digital painter friend Victor and he became as excited as me on these tools. Wanting to know the beast more deeply, I spend days and nights tweaking and testing all the functions of the software, while watching tutorials and reading articles about it. I have the feeling that Krita could become one of the most respected digital painting software out there. For two main reasons : it’s free, so everyone will be able to test it and see how nice it is, and it is very powerful. But what are these famous features ? Here is a quick review of the best things I found in this software.

I used the last beta (2.9 beta 2) to have a deeper look on what is coming. Cool list! 1. Krita 2.9: Line exercises. Krita Tutorial & Resources. Wolthera's Resource Bundle Thread. Hey hey, with 2.9, you can now bundle resources. 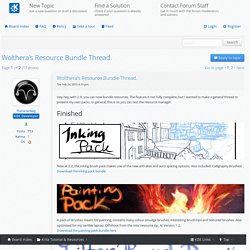 The feature is not fully complete, but I wanted to make a general thread to present my own packs. In general, this is so you can test the resource manager. Finished. KDE Community Forums. Krita Animation. Krita tip 01. Monotone image with Transparency mask. Krita Cage Tool Demo. Krita tutorial 2 - Layers and editing by White-Heron on DeviantArt. DeviantArt: More Like Krita tutorial - Basics by White-Heron. Krita/Tutorial 1. Krita/Tutorial 2. Krita tutorial - Part II Welcome to the second part of my tutorial! 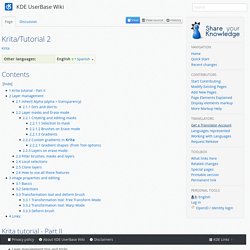 This somewhat boring (but still useful!) Episode will cover: Layer management tips and tricks General image editing tips and tricks Tips: Unless you always draw everything on the same layer, always remember to make a new, transparent layer to draw on instead of the background layer (unless you're drawing the background). Layer management. Krita/Tutorial 3A. Krita Tutorial - Part III: Brushes This current part will cover Brush-related items: Brush management Drawing modes Drawing assistants. Originally I wanted to at least include the part on Pixel Brushes, but that got ridiculously long so... Automatic flat-coloring in Krita by Rastaban26 on DeviantArt. Krita/Tutorial 6. Tutorial: Curve, Particle and Dyna brushes All about lines!

All three of these brushes produce lines of sorts, so this tutorial tells you the differences! In particular, the Curve brush is my recommended tool for drawing comic and anime lines, unless you're using the more expressive Sketch brush. Curve brush. Krita. Introduction Krita is an free and cross-platform creativity application for digital painting, image manipulation, concept art, comics and texture creation.

It is modeled on existing real-world painting materials and workflows, but also packs with functions like layers, filters, vector path drawing, typography, and built-in color management support. Krita tutorial - Basics by White-Heron on DeviantArt. Tips for Learning Krita's "Hidden Secrets" Please do not ask questions on this thread. Post a new thread so this one stays full of useful tips rather than long discussions. Thanks! Krita is powerful, but it does many things just a bit differently to other applications. It also has a bunch of neat tricks hidden away in shortcuts and other non obvious places.

This is an attempt to make them better known. 1. 2. 3. 4. 5. Painting a Self Portrait in Krita. Krita Free Painting App Tutorial by TysonTan on DeviantArt. Tutorial : Getting started with Krita (1/3) b&w portrait. The result of this blog post tutorial exercise "Getting started with Krita" is a tutorial series of three blog post. The tutorials are designed for Krita 2.7 ( or later version ) + my brushkit V3 . So, be sure to have them installed before start. I hope you'll learn something with this series. My goal here is to share the passion I have for digital painting and help new talents to get faster rid of the technical aspect to do the essential : telling stories, sharing beautifull pictures, expressing an artistic soul, etc... Tutorials — Shading: There where the light can not reach.