8 Photos You Didn't See From Obama's Trip to South Africa. On Tuesday, conservative news outlets in the United States decided that the best way to commemorate the life of Nelson Mandela, and to report on the memorial services in his honor, was to manufacture a controversy about an AFP photo of President Barack Obama shooting a selfie with Danish Prime Minister Helle Thorning-Schmidt. 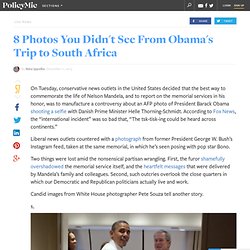 According to Fox News, the “international incident” was so bad that, “The tsk-tisk-ing could be heard across continents.” Liberal news outlets countered with a photograph from former President George W. Bush’s Instagram feed, taken at the same memorial, in which he’s seen posing with pop star Bono. Two things were lost amid the nonsensical partisan wrangling. 33 Conspiracy Theories That Turned Out To Be True.

Most people can’t resist getting the details on the latest conspiracy theories, no matter how far-fetched they may seem. 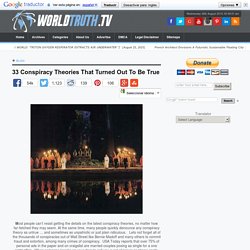 At the same time, many people quickly denounce any conspiracy theory as untrue … and sometimes as unpatriotic or just plain ridiculous. Lets not forget all of the thousands of conspiracies out of Wall Street like Bernie Madoff and many others to commit fraud and extortion, among many crimes of conspiracy. USA Today reports that over 75% of personal ads in the paper and on craigslist are married couples posing as single for a one night affair.

When someone knocks on your door to sell you a set of knives or phone cards, anything for that matter, do they have a profit motive? What is conspiracy other than just a scary way of saying “alternative agenda”? 25 Amazing (and Disturbing) Facts About the Hidden History of Medicine. Monitoring foreign military use of Shannon Airport. The New Abu Ghraib – in pictures. Truth does not matter for “Israel”. 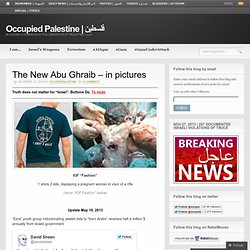 In the past year, nine vocal critics or potential whistleblowers of the Gulf oil spill all died in extremely mysterious ways. 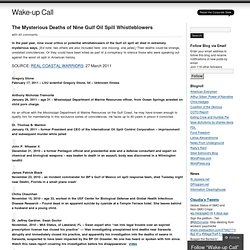 [Ed note: two others are also included here: one missing, one jailed.] Their deaths could be strange, unrelated coincidences. Or they could have been killed as part of a conspiracy to silence those who were speaking out against the worst oil spill in American history. Gregory Stone February 17, 2011 – LSU scientist Gregory Stone, 54 – Unknown Illness Anthony Nicholas Tremonte January 26, 2011 – age 31 – Mississippi Department of Marine Resources officer, from Ocean Springs arrested on child porn charge. As an officer with the Mississippi Department of Marine Resources on the Gulf Coast, he may have known enough to qualify him for membership in this exclusive series of coincidences.

Dr. January 19, 2011 – former President and CEO of the International Oil Spill Control Corporation – imprisonment and subsequent murder while jailed John P. WATCH: That Awkward Moment When Anti-Immigration Protesters Realize They're Immigrants Too. Wikileaks: Children under care of Irish government ended up in brothels. Children who have gone missing from Irish state care over the last few years have ended up in brothels. 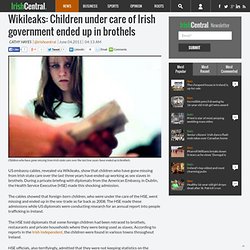 US embassy cables, revealed via Wikileaks, show that children who have gone missing from Irish state care over the last three years have ended up working as sex slaves in brothels. During a private briefing with diplomats from the American Embassy, in Dublin, the Health Service Executive (HSE) made this shocking admission. The cables showed that foreign-born children, who were under the care of the HSE, went missing and ended up in the sex-trade as far back as 2008. The HSE made these admissions while US diplomats were conducting research for an annual report into people trafficking in Ireland.

The HSE told diplomats that some foreign children had been retraced to brothels, restaurants and private households where they were being used as slaves. HSE officials, also terrifyingly, admitted that they were not keeping statistics on the numbers. Homelessness Becomes A Crime In Hungary. Hide captionZoltan Szarka is a 27-year-old unemployed construction worker. 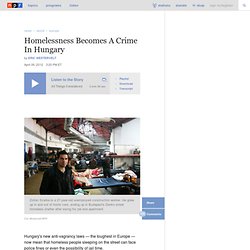