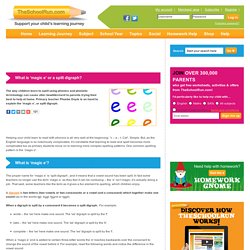 Cat”. Simple. But, as the English language is so notoriously complicated, it’s inevitable that learning to read and spell becomes more complicated too as primary students move on to learning more complex spelling patterns. Mrs. Judy Araujo, Reading Specialist. Syllables are the beats that compose a word when you speak it. 16_syllable_rules.cwk_(WP)_ SyllablesMadeSimpleAGuide Syllabication Rules WHY STUDY SYLLABLES? 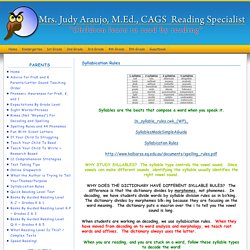 Blends & Consonant Clusters. Consonant clusters or blends, are the names given to two or three consonants that appear together in a word. 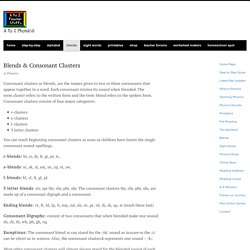 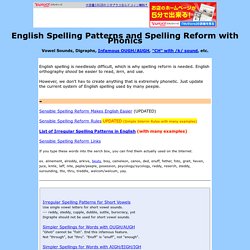 English orthography shood be easier to read, lern, and use. However, we don't hav to create anything that is extremely phonetic. Just update the current system of English spelling used by many peeple. Feeling bright great and proud r consonant blends activity. Crash Course in Phonics, part 2 – The Classroom Key. Introduction to English Vowels — Pronuncian: American English Pronunciation. Vowel sounds are divided into the following three categories: Long vowels (vowels that sound like the letter name)Short vowels (the most common sound for a single vowel spelling)Other vowels (the remaining vowel sounds) The long vowel sounds are not pronounced for longer time than short vowel sounds! It is important for ESL/ELL/EFL students to realize that the terms "long" and "short" are not describing the length of time a vowel sound is said.

These archaic terms are still in popular use in American classrooms and online. They are used here to give a name to a vowel sound so when the sound is discussed, the name and not the sound (which many beginner students cannot yet hear correctly) is used. Diphthongs, Modified Vowels and Vowel Digraphs. Vowel-Consonant (CVC) pattern. Vowelpatternsall. Consonants — Discourse Functional Grammar. There are three factors that affect how American English consonants are produced. 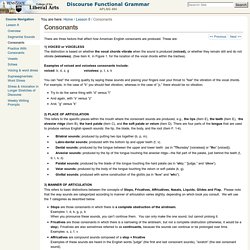 These are: 1) VOICED or VOICELESSThe distinction is based on whether the vocal chords vibrate when the sound is produced (voiced), or whether they remain still and do not vibrate (voiceless). (See item K. in Figure 1. for the location of the vocal chords within the trachea). Greek Phonology. In this chapter, I will attempt to describe the Greek phonemes without introducing the Greek letters (except for a handful used for notational purposes) and their pronunciation, which is the object of the following chapters. 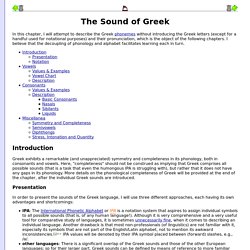 I believe that the decoupling of phonology and alphabet facilitates learning each in turn. Introduction Greek exhibits a remarkable (and unappreciated) symmetry and completeness in its phonology, both in consonants and vowels. Here, "completeness" should not be construed as implying that Greek comprises all possible sounds (that is a task that even the humongous IPA is struggling with), but rather that it does not have any gaps in its phonology. More details on the phonological completeness of Greek will be provided at the end of the chapter, after the individual Greek sounds are introduced. Presentation In order to present the sounds of the Greek language, I will use three different approaches, each having its own advantages and shortcomings: Definition and Examples of Consonant Clusters.

Definition In linguistics, a consonant cluster (CC) is a group of two or more consonant sounds that come before (onset), after (coda), or between (medial) vowels. 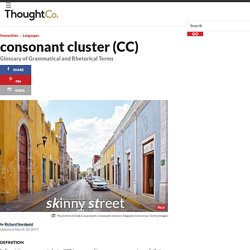 Also known simply as cluster. Consonant cluster simplification (or reduction) sometimes occurs when one consonant (or more) in a sequence of adjacent consonants is elided or dropped. The ESL: COMPLEX VOWELS AND VOWEL COMPLEXES: DIPHTHONGS AND TRIPHTHONGS. 1. 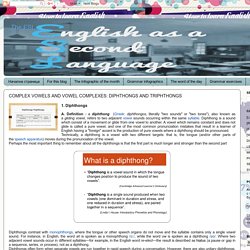 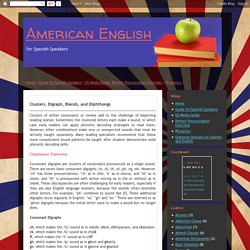 Sometimes the clustered letters each make a sound, in which case early readers can apply phonetic decoding strategies to read them. Long vowel spelling patterns. Vowel Clusters. VOWEL PAIRS or CLUSTERS. The VOWEL CLUSTERS Activity: The pronunciation of vowel pairs in the left column below, can be studied and practised at AntWise© HEAR the AUDIO version in Windows Media Player. 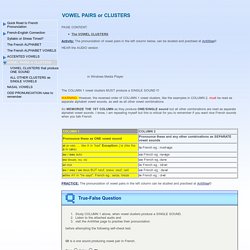 Short vowel charts. Podcasts — Pronuncian: American English Pronunciation. Transcript Hi again, and welcome back to Seattle Learning Academy's American English pronunciation podcast. My name is Mandy, and this is our 206th episode. Today I want to talk about the contraction I'd, (I-apostrophe-e) which can be used to contract either I would or I had. I notice that some contractions are embraced by non-native speakers much more than others. For instance, many of my students willingly use don't for do not, or won't for will not. One of the biggest benefits of using contractions is that they help the rhythm of your spoken English sound more fluent. Let me be absolutely clear that the contractions for both of these words is I'd, pronounced exactly the same. I'd can be especially tricky to pronounce because we have special linking rules when we link from the d sound into either an l sound or an n sound.

Listen to the two following sentences and see if you can hear the difference: I like bacon.I'd like bacon. An Index of Phonic Patterns by Vowel Types. Freebies > Articles > An Index of Basic Phonic Patterns by Vowel Types from The Teaching of Reading: a Continuum from Kindergarten through College Use this index to locate additional rimes (word families) that illustrate phonic principles taught in any reading series. The following charts list various phonic patterns or word families associated with specific vowel patterns.

To make it as easy as possible for a teacher or diagnostician to use, we have listed the most common patterns and arranged them according to the basic fourteen vowel phonemes in English. We list sample words first, so that a teacher or diagnostician can use these lists diagnostically and/or prescriptively. That is, a teacher can have a student attempt to either read or spell the words from a list. You can view a sample page (PDF) by clicking on one of the Sample Words in color.