Phonemes and their Role in Dyslexia. Quick facts The smallest units of speech sound that can convey a unique meaningThere are 44 English phonemes, French 34 and German 46Dyslexics have trouble distinguishing and manipulating the soundsSuccessful dyslexia reading programs help improve students' abilities to discriminate, pronounce and manipulate the soundsPhonemic awareness is the best indicator of future reading ability Word origins. 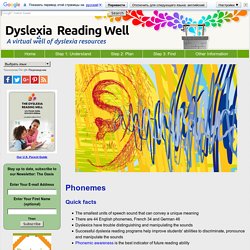 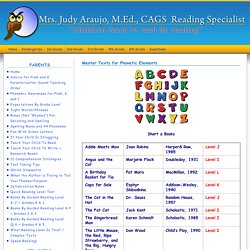 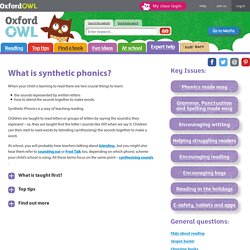 Saying sounds correctly. Vowels Can Be Fun! Basic Spelling Rules Explained. You can teach yourself to be a better speller. 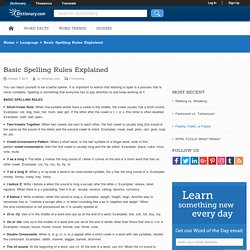 It is important to realize that learning to spell is a process that is never complete. Spelling is something that everyone has to pay attention to and keep working at it. Short-Vowel Rule: When one-syllable words have a vowel in the middle, the vowel usually has a short sound. Examples: cat, dog, man, hat, mom, dad, got. If the letter after the vowel is f, l, or s, this letter is often doubled. Teaching Long Vowel Spelling Patterns. Shows mouth should when making vowel sounds. English Pronunciation: Syllables. VOWELS SOUNDS. Tongue (and Mouth) Awareness - Magoosh TOEFL Blog. We all make the sounds in our native language without thinking. 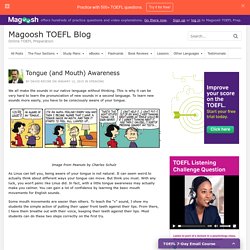 This is why it can be very hard to learn the pronunciation of new sounds in a second language. To learn new sounds more easily, you have to be consciously aware of your tongue. Image from Peanuts by Charles Schulz As Linus can tell you, being aware of your tongue is not natural. It can seem weird to actually think about different ways your tongue can move. Some mouth movements are easier than others. Other sounds are not-so-easy. Alphabet and Beyond. Now that we know how Greek sounds, let us see what it looks like. 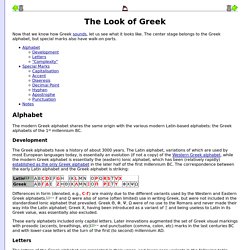 F and Q were also of some (often limited) use in writing Greek, but were not included in the standardised Ionic alphabet that prevailed. These early alphabets included only capital letters. And punctuation (comma, colon, etc) marks in the last centuries BC and with lower-case letters at the turn of the first (to second) millennium AD. Letters The letters of the Greek alphabet are presented in their upper- and lower-case variants in the following table. The ESL: PHONETICS AND PHONOLOGY. Podcasts — Pronuncian: American English Pronunciation. Transcript Hi again, and welcome back to Seattle Learning Academy's American English pronunciation podcast. 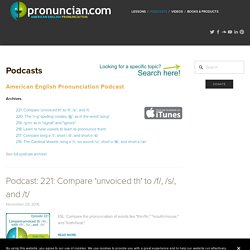 My name is Mandy, and this is our 206th episode. English Pronunciation Lesson. Updated! 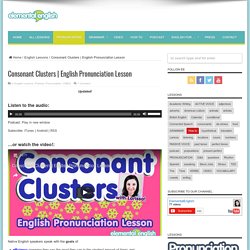 Listen to the audio: Podcast: Play in new window Subscribe: iTunes | Android | …or watch the video! : Consonant Clusters. Teaching Kids Vowel Clusters. Cattle vs kettle - Short A (AA) and Short E (EH) sounds. Hi, Before starting, I have to mention a few issues (if you haven’t read about them yet). 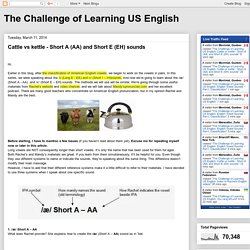 Excuse me for repeating myself now or later in this article. Long vowels are NOT consequently longer than short vowels. It’s only the name that has been used for them for ages. Both Rachel’s and Mandy’s materials are great. English Vowel Sounds – Part I. Classification. Hi, Let’s jump to a serious topic that I’ve had the most difficulties with in my English learning: the system of the American English vowel sounds. 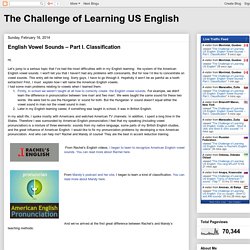 I won't tell you that I haven’t had any problems with consonants, But for now I’d like to concentrate on vowel sounds. This entry will be rather long. Sorry guys, I have to go through it. The Challenge of Learning US English: Sheep vs ship - Long E (EE) and Short I (IH) Sounds. Hi, Let’s begin to work on vowel sounds in pairs. One of my mistakes was that I couldn’t differentiate between two vowels: the long E vowel (like in sheep) and short I vowel (like in ship). Understanding the difference between these two vowels is very important, otherwise you can misunderstand others, or you can be misunderstood and get into an awkward situation. For example, if you say shit instead of sheet during a presentation, or bitch instead of beach, or piss instead of peace, you may seem offensive, vulgar or very rude. You have to be careful. Practice pronouncing 'short o' /ɑ/ How to pronounce the 'short u' /ʌ/ Syllable pattern. Untitled.

How to Spell. On/one, us/use, hat/hate, tap/tape, at/ate, mat/mate, sit/site, cap/cape, at/ate, quit/quite, win/wine. Did you notice the pronunciation/the vowel sound in the second word was longer? When we add an 'e' to the end of a lot of words, especially short vowel sound words, it changes the sound and meaning. It makes the vowel sound long and say its alphabet name: "a = ay," "e = ee," "i = eye," "o = oh," " u - you" - hat/hate, pet/Pete, rid/ride, cod/code, us/use. CVC pattern. Rachel's English Academy. 25+ Difference between Phonetics and Phonology. How many differences are there between phonetics and phonology?

These can be as many as 25 or more! Phonetics and phonology are two important intra-disciplinary branches of linguistics. Though closely interlinked and serving the same purpose, i.e. dedicated to the study of human speech sounds and sound structures, phonetics and phonology differ from each other to an extent that each has been given a separate disciplinary status. Fultonpds [licensed for non-commercial use only] / Vowel Diphthongs. Patterns of early phonological development. Patterns of early phonological development. Kristo Ch 6. Phonological processes affect entire classes of sounds. In addition to simple articulation errors, children may produce erroneous phonological processes.

These are errors that affect entire classes of sounds rather than individual sounds. These processes are a normal and natural part of language development and are to be expected in children just beginning to speak. However, if they persist beyond age five or six, therapy may be necessary. Phonological Processes. Phonology is the study of the rule system that governs how particular speech sounds are used to produce meaningful words. It investigates the systematic organization of sounds in a particular language. In particular, phonology is concerned with phonemes. Syllables and Clusters. We have seen elsewhere (Phonological Organization) that phonemes may be combined to form words and that there is an intermediate level of phonological organization between the phoneme and the word known as the syllable.

Early years (0-3 years) – RESEARCH REVIEWED. Now, the Star-Belly Sneetches Had bellies with stars. The Plain-Belly Sneetches Had none upon thars. Those stars weren’t so big. They were really so small You might think such a thing wouldn’t matter at all. But, because they had stars, all the Star-Belly Sneetches Would brag, ‘We’re the best kind of Sneetch on the beaches.’ … More The development of rhyme awareness As it turns out, neuroplasticity is not just a trendy buzzword of the past decade or so; it’s also quite an interesting research topic.

If you’ve been paying attention these past few weeks, you’re going to be familiar with my continual references to something called ‘phonological processing’. I referred in my previous post to the sponge-like qualities of human children. Something that is unendingly fascinating to me is the transition that humans make in the first few years of life from burping/dribbling to speaking/understanding. Introduction. Introduction. Phonological assessment – RESEARCH REVIEWED. Before I dig in, I want to briefly define some terminology… Sequence phonological label. Sequence phonological label. Word patterns list. CVC, CVCe, CVVC Patterns. (5) diphthongs. Diphthongs. Cando's Helper Page! Short vowel words. CVC pattern. Phonics - 1stGrade Phonics & Grammar. Eva Easton's Authentic American Pronunciation. Skip navigation Authentic American Pronunciation evaeaston.com. UIC.