Design Tools and other Methods 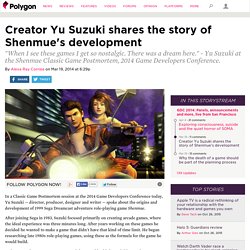 After joining Sega in 1983, Suzuki focused primarily on creating arcade games, where the ideal experience was three minutes long. After years working on these games he decided he wanted to make a game that didn't have that kind of time limit. He began researching late 1980s role-playing games, using these as the formula for the game he would build. "When I see these games I get so nostalgic," Suzuki said through his translator, PlayStation 4 architect and game designer Mark Cerny. Yu Suzuki's Shenmue Postmortem (GDC 2014)

30 Seconds of Fun. The 30-Second Hook. The following blog post, unless otherwise noted, was written by a member of Gamasutra’s community. 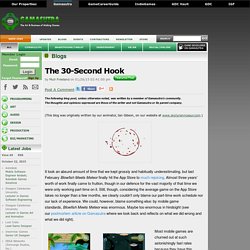 The thoughts and opinions expressed are those of the writer and not Gamasutra or its parent company. (This blog was originally written by our animator, Ian Gibson, on our website at www.skytyrannosaur.com.) It took an absurd amount of time that we kept grossly and habitually underestimating, but last February Blowfish Meets Meteor finally hit the App Store to much rejoicing. Almost three years' worth of work finally came to fruition, though in our defence for the vast majority of that time we were only working part-time on it. Still, though, considering the average game on the App Store takes no longer than a few months, we clearly couldn't only blame our part-time work schedule nor our lack of experience. Stage 1 of BMM. Stage 57 of BMM. Early concept sketch for Blowfish Burst. Blowfish in a gumball machine. A screenshot from the Flash game Blowfish Relay. AARRR (Startup Metrics) - StartitUp.

This is the AARRR (Must Read!) 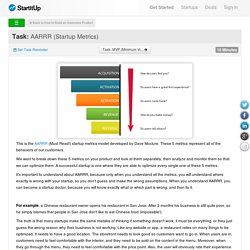 Startup metrics model developed by Dave Mcclure. These 5 metrics represent all of the behaviors of our customers. We want to break down these 5 metrics on your product and look at them separately, then analyze and monitor them so that we can optimize them. A successful startup is one where they are able to optimize every single one of these 5 metrics. It's important to understand about AARRR, because only when you understand all the metrics, you will understand where exactly is wrong with your startup, so you don't guess and make the wrong assumptions. Tools for Game Design: Game Design Tools. 100 Principles of Game Design - Wendy Despain - Google Books. MDA framework. Mechanics, Dynamics and Aesthetics from the perspectives of designer (blue) and player (green). 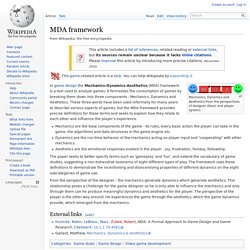 In game design the Mechanics-Dynamics-Aesthetics (MDA) framework is a tool used to analyze games. It formalizes the consumption of games by breaking them down into three components - Mechanics, Dynamics and Aesthetics. These three words have been used informally for many years to describe various aspects of games, but the MDA framework provides precise definitions for these terms and seeks to explain how they relate to each other and influence the player's experience. Mechanics are the base components of the game - its rules, every basic action the player can take in the game, the algorithms and data structures in the game engine etc.Dynamics are the run-time behavior of the mechanics acting on player input and "cooperating" with other mechanics.Aesthetics are the emotional responses evoked in the player - joy, frustration, fantasy, fellowship.

The Design of Free-To-Play Games: Part 1. The Design of Free-To-Play Games: Part 1 By Pascal Luban When we talk about free-to-play games, we are not talking of a new genre, but instead of a deep revolution that is affecting most aspects and actors of the game industry: marketing, publishing, hardware manufacturers, and of course, designers and developers. 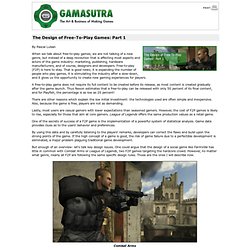 Free-to-play (F2P) is here to stay. That is good news; it is expanding the number of people who play games, it is stimulating the industry after a slow-down, and it gives us the opportunity to create new gaming experiences for players. A free-to-play game does not require its full content to be created before its release, as most content is created gradually after the game launch. There are other reasons which explain the low initial investment: the technologies used are often simple and inexpensive. Lastly, most users are casual gamers with lower expectations than seasoned gamers.