Mobile App Development; Avoid these silly Mistakes…!!! I was just going through a recent research that portrayed that mobile users are spending a lot more than anticipated time on their hand held devices, or so called mobile devices. 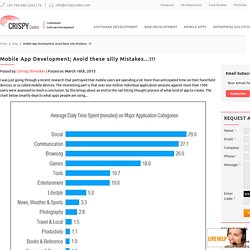 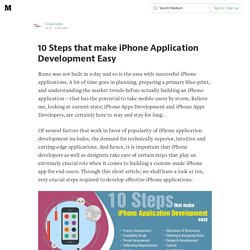 A lot of time goes in planning, preparing a primary blue-print, and understanding the market trends before actually building an iPhone application — that has the potential to take mobile users by storm. 8 Mobile Apps Design Tips for the Best UX. Every Dollar – if invested appropriately into usability of your app, returns you more than hundred times. 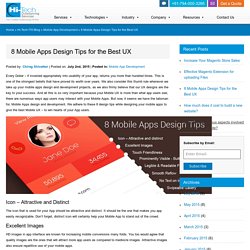 This is one of the strongest beliefs that have proved its worth over years. We also consider this thumb rule whenever we take up your mobile apps design and development projects, as we also firmly believe that our UX designs are the key to your success. 3 Major Challenges in Mobile Apps Development. Mobiles or smartphones are increasingly becoming main devices for business use. 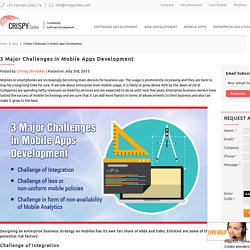 The usage is prominently increasing and they are here to stay for a long-long time for sure. If we talk about enterprise level mobile usage, it is likely to grow above 40% by the dawn of 2018. Companies are spending hefty revenues on mobility services and are expected to do so until next few years. Enterprise business owners have tasted the success of mobile technology and are sure that it can add more flavors in terms of advancements to their business and also can make it grow to the best.

Designing an enterprise business strategy on mobiles has its own fair share of ebbs and tides. How much does it cost to build an iPhone App? Empire state building or an apartment both of them are buildings? 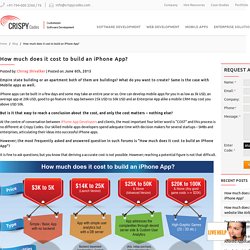 What do you want to create? Same is the case with Mobile apps as well. iPhone apps can be built in a few days and some may take an entire year or so. One can develop mobile apps for you in as low as 3k USD, an average app at 20k USD, good to go feature rich app between 25k USD to 50k USD and an Enterprise App alike a mobile CRM may cost you above USD 50k. But is it that easy to reach a conclusion about the cost, and only the cost matters – nothing else? At the centre of conversation between iPhone App Developers and clients, the most important four letter word is “COST” and this process is no different at Crispy Codes. Comparing Top 4 Mobile Operating System. Are you planning to purchase a new mobile phone? 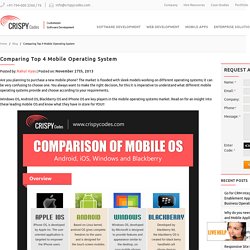 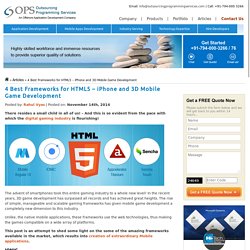 – And this is so evident from the pace with which the digital gaming industry is flourishing! The advent of smartphones took this entire gaming industry to a whole new level! In the recent years, 3D game development has surpassed all records and has achieved great heights. The rise of simple, manageable and scalable gaming frameworks has given mobile game development a completely new dimension to this industry. Unlike, the native mobile applications, these frameworks use the web technologies, thus making the games compatible on a wide array of platforms. This post is an attempt to shed some light on the some of the amazing frameworks available in the market, which results into creation of extraordinary Mobile applications. Considered as one of the most potential HTML 5 mobile game development frameworks; Ionic is created using the SASS. 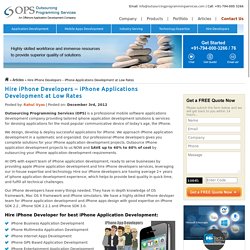 We design, develop & deploy successful applications for iPhone. All set to Launch your Mobile App – Ask the Following Question before Launch. Mobile apps have literally brought the entire world on your fingertips! 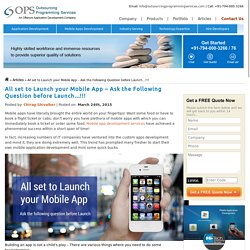 3 Mobile App development mistakes you should always avoid!!! A brilliant business idea – And you want to take it to a new level with a mobile application. 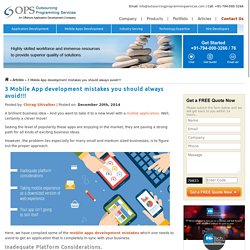 Well, certainly a clever move! Seeing the level of popularity these apps are enjoying in the market; they are paving a strong path for all kinds of exciting business ideas. However, the problem lies especially for many small and medium sized businesses, is to figure out the proper approach. Here, we have complied some of the mobile apps development mistakes which one needs to avoid to get an application that is completely in-sync with your business. Inadequate Platform Considerations. iOS, Android or Windows – Which platform is the best for me? This question is often confronted by the app developers; however, often they fail to systematically scrutinize each option at their disposal.

» Articles » 5 Reasons to believe that iPhone Application Development Makes your business more lucrative Posted by: Chirag Shivalker | Posted on: February 16th, 2015 This is the right time for iPhone Application Development; Businesses wanted to reach out to millions of new iPhone users to promote business. Check out how iPhone Application Development makes business more lucrative. In the eternal tug-of-war between Android and Apple, the technological giant, Apple gained an extra point! With recent release of its most sophisticated range of devices including iPhone 6, iPhone 6 Plus and iOS 8; creating a buzz among Apple fans across the globe. Full with a set of numerous new and exciting features, along with a larger display, Apple sold a whopping number of 39 million iPhone 6 in the very first week of its launch, in fact, the demand is still mounting.

What is So Special About The Android Powered Watch? LG’s new Android powered Smart watch is the next revolution that will empower your usage of mobile phone on your wrist. It is very surprising to find the effortlessness of the design; said a team of hackers, who revealed a few special features. We might witness the birth of the smart watch revolution. Google has unleased not one, not two, but three smart watches onto the battlefield. The site provided watch a reparability score of 9 out of 10 (10 is laid-back to repair) for reasons being: Screws and spring contacts mean the rear case is super easy to eradicate.The battery consists of a lone Phillips screw and minimal adhesive, making replacement easy.Not the easiest watch band to remove, but an old standard that should not pose much of a risk to band-replacers.It consists of a clean design with few delicate cables and connectors that means a healthier, repair-ready device.

The watch was disclosed by Google at its developer conference in San Francisco. Apple iPhone 6 ‘Phablet’ & iWatch launch - Yet another Leak!! In yet another sensational leak, the iPhone 6 phablet pictures became public. The new phone from apple, supposed to be called ‘iPhone Air’ is the largest version of iPhone apple has ever built. There will however, be two versions of the phone, a sensational 5.5 inch version and another, a 4.7” version. It is also being speculated that the handset measures 158mm by 78mm and has a thickness of just 7mm. The handset boasts of a scratch proof sapphire screen with a retina display and resolution of 1704x904. The phone could have a faster A8 processor and possibly a high quality rear facing camera with changeable lenses.