19 Questions I Have About "Beauty And The Beast" Now That I'm An Adult. 27 Disney Jokes That Are Seriously Clever And Funny. This Cartoon Perfectly Nails How Foreigners Stereotype All Indian Food As "Curry" Holy Shit, Indian Siri Is The Funniest Siri. 21 Ways To Mix Patterns Like A Fashion Blogger. 17 Of The Best Tailgating Food Tips On Pinterest. 21 Tumblr Posts About Food That Are Honestly So Damn Real. 19 New Things J.K. Rowling Taught Us About Harry Potter In 2015. Here’s How I Got Rid Of My Acne Once And For All. This Mind-Blowing "Harry Potter" Theory About Dumbledore Is Insanely Clever. 16 Things Hardcore Sneaker-Lovers Know To Be True. 20 Times "Whose Line Is It Anyway?" Was The Greatest Show On TV.

25 Suit Hacks That Will Make Any Man Look Instantly Sexy. The "Harry Potter" Actors Doing Normal Stuff Together Is So Weird. 21 Times "Harry Potter" Was The Cleverest Book Series Ever. For Everyone Who Knows That The Trees Were Actually The Real Winners Of The Half Time Show. The 23 Most Important Moments In Left Shark History. 23 No-Bake Desserts That Want To Be Your Valentine. How A One-Word Email To 29,000 UCL Students Led To The Funniest Reply-All Thread Ever. Watch Amy Poehler Perfectly Take Down Male Privilege In One Minute.

Toronto's New Anti-Littering Campaign Is So Brilliantly Sassy. This Tumblr Puts Hip-Hop Lyrics Over Classic Art And It's Actually A Masterpiece. 16 Beach Hacks That Will Save Your Summer. 30 Harry Potter Facts That'll Make You Want To Reread The Series (Again) This Married Couple Does Choreography Together And It's Super Sexy. This Married Couple Does Choreography Together And It's Super Sexy. Can You Make It Through This Post Without Your Ovaries Exploding. This Is The Best Game To Play With Your Family Over The Holidays. 24 Kids Who Are Clearly Being Raised Right. 22 Things That Belong In Every Bookworm's Dream Home. 22 Times When Vandalism Won. If Joey From "Friends" Had Instagram. This Oscars-Esque Montage Of All The Deaths On "Breaking Bad" Is The Closure You Need Right Now. 18 Fun Easter Eggs, Callbacks, And Moments Of Really Cool Symmetry From The "Breaking Bad" Finale. 25 Defining Traits Of Your South Asian Parents.

What Google Will Look Like In 10 Years. 26 Truths Of Growing Up Without Cable. 16 Amazing Details You Might Have Missed In The Final Season Of "Breaking Bad" His First 4 Sentences Are Interesting. The 5th Blew My Mind. And Made Me A Little Sick. John Green: Good morning, Hank, it's Tuesday. 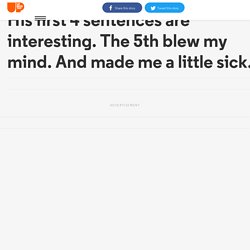 I wanted to talk today about why healthcare costs in the United States are so phenomenally, fascinatingly expensive, but first I have to blow your mind. Alright, so you've probably heard that the reason people enjoy "free" healthcare in Australia and the UK and Canada, etc., etc., is that they pay higher taxes. That money then goes into a big pot and is used to pay for peoples' healthcare. But IN FACT, in the United States, we spend more tax money per capita on healthcare than Germany, Australia, the United Kingdom, or Canada. That's right Hank, you pay more in taxes for healthcare than you would if you were British, and in exchange for those taxes, you get... no healthcare.

In fact, only about 28% of Americans get their health insurance through government funded programs -- mostly poor people, old people, and congress people. Why is this? A hip replacement in Belgium costs $13,000; in the US, it's often over $100,000. 19 Puns That Only Desis Will Understand. 18 Everyday Products You've Been Using Wrong. 21 "Breaking Bad" Easter Eggs That Will Blow Your Mind. 30 Foods You'll Never Have To Buy Again. The 30 Happiest Facts Of All Time. 28 Incredibly Beautiful Places You Won't Believe Actually Exist.

50 Things You Will Never Get For Christmas Again. The White House Response To The Death Star Petition Is Amazing. 38 Maps You Never Knew You Needed. 21 Incredibly Important Diagrams To Help You Get Through Life.