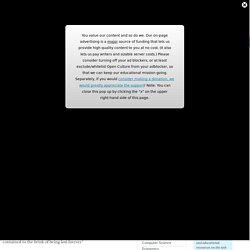 According the Lab, “around 10,000 of these films sat idle, scattered across the country in high-security vaults. Not only were they gathering dust, the film material itself was slowly decomposing, bringing the data they contained to the brink of being lost forever.” In the first video above, weapon physicist Greg Spriggs discusses how a team of experts salvaged these decomposing films, with the hope that they can “provide better data to the post-testing-era scientists who use computer codes to help certify that the aging U.S. nuclear deterrent remains safe, secure and effective.” If you click the forward button, the playlist will skip to the next video, the first of 63 nuclear tests. Several of those clips you can watch below: Operation Hardtack Operation Plumbbob Operation Teapot. How to save yourself if you're choking! British seaside town blasted with mysterious white goo.

The catchiest New Wave song (written by a doomsday cult) of all time. I know a girl who was part of "the Family" (as they call it). 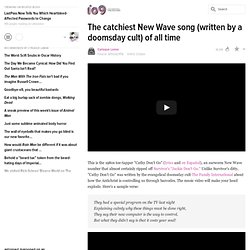 She grew up in one of the "homes", and while she hasn't gone into any great detail, there is definitely a "free love/sex" thing going on there (the girl I know is awesomely nice, and very... open-minded). On the other hand, she complained a bit about the restrictions about living there (and I think sex is sort of a recruiting tool in a way, although she never explicitly said that). Anyway - she moved out on her own, and ended up moving to another country (I knew her when she was living in Asia). I had never heard of "the family" before she told me a bit about it. I looked it up in the same wiki article that's linked to from this page. Lovely Owl. Auto-Tune. Auto-Tune PBS Airdate: June 30, 2009 NEIL DeGRASSE TYSON: "Our love was like a supernova," Yeah, I sing. 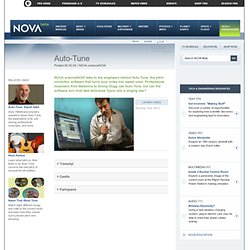 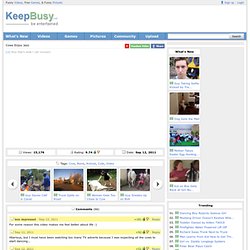 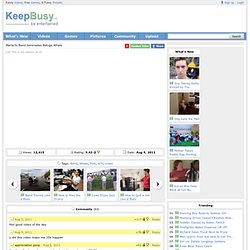 Tags: Band, Whale, Fish, WTF, Video <div class="highlightRed"><p>Please enable JavaScript. Band Travels Like a Boss How to Play the Drums Cows Enjoy Jazz How to Quit a Job Like a Boss Drummer Plays Solo, Gets Sick, ... Autistic 10-Year-Old Makes Beat... Grandma Caught Playing Drums in... Dad and Son Play Drums Bird Flies On Stage During Conc... Violinist Reacts to Ringtone Guitarist Quits During Show Guitar Swing Fail Comments (63) Welcome to Pyramiden, the Soviet ghost town at the edge of the world. Space Nuclear Weapon Test. It's electric! Ars Electronica kicks off. Kat Austen, CultureLab editor "He's completely covered in metal and there's a 7-metre no-go zone around him", one of the Ars Electronica technical support told me as I waited to see the Tesla Orchestra perform yesterday evening at the festival's opening night. 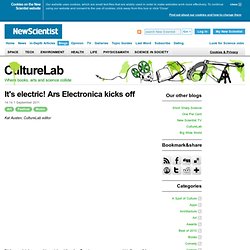 "I saw him at rehearsal," he continued, referring to the orchestra's conductor and director Ian Charnas. "He was amazing. It's the blitz, it plays the music. " Electricity was in the air as we waited for Charnas to appear, tantalised by two Tesla coils, exuding potential from atop a cement grandstand that forms part of the Ars Electronica Centre. Suddenly, a figure came into view between the coils.

In the performance Tesla coils generate a massive voltage, creating lightning directed by a pre-composed musical score. A similar set-up to the "fighting wizards" that are the Lords of Lightning, in the case of the Tesla Orchestra the lightning is controlled by the music. It's such fun that the orchestra decided to share the joy. Advice Animals. Listen to the strange singing of the frozen Black Sea.