Paleo Zero Carb Rice & Chicken Recipe. Brisket with Caramelized Onions & Porcini Mushrooms. How To Make Healthy Noodles. The other night I had a pound of grass-fed ground beef thawing and I was in need of some healthy inspiration. 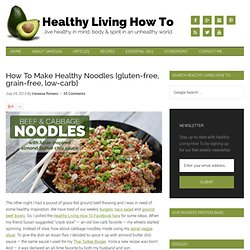 We have tired of our weekly burgers, taco salad and ground beef bowls. So, I polled the Healthy Living How To Facebook fans for some ideas. When my friend Susan suggested “crack slaw” — an old low-carb favorite — my wheels started spinning. Instead of slaw, how about cabbage noodles, made using my spiral veggie slicer. NY style paleo pizza crust. Yes, really. I was raised by two New Yorkers, and if they taught me anything, they taught me how to be a serious pizza snob. 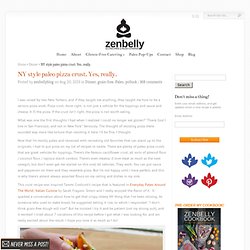 Pizza crust, done right, is not just a vehicle for the toppings and sauce and cheese. It IS the pizza. If the crust isn’t right, the pizza is not worth eating. Plantain Tortillas. A while back, my friend Johnny from Eating For Idiots and I had a cooking day and came up with a recipe for cilantro-lime chicken with ranchero sauce on plantain tostadas. 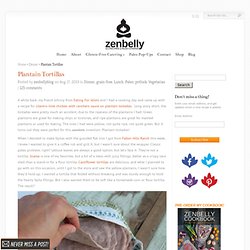 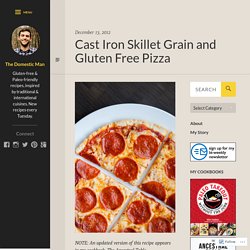 For a dairy free variation, check out my Flatbread recipe. Like most residents of planet Earth, I’m pizza crazy. I’d like to say that my love affair started with those pesky Ninja Turtles, but I have a feeling that I was addicted well before the heroes in a half shell became popular. When adopting Paleo, I was probably worried about a lack of pizza the most, and after re-introducing dairy I tried all sorts of things, from frozen GF crusts to eggplant pizzas. Coconut “Rice” While I can’t remember the last time I made a pot of real rice at home, I eat it occasionally when I’m out. 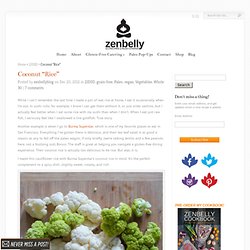 In sushi rolls, for example; I know I can get them without it, or just order sashimi, but I actually feel better when I eat some rice with my sushi than when I don’t. When I eat just raw fish, I seriously feel like I swallowed a live goldfish. True story. Another example is when I go to Burma Superstar, which is one of my favorite places to eat in San Francisco. Everything I’ve gotten there is delicious, and their tea leaf salad is as good a reason as any to fall off the paleo wagon, if only briefly. Coconut “Rice” Stupid Easy Paleo Spaghetti Squash & Meatballs - PaleoPot - Easy Paleo Recipes - Crock Pot / Slow Cooker / One-Pot. 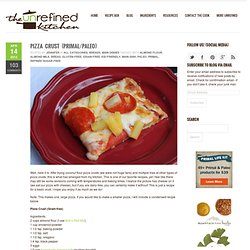 After trying coconut flour pizza crusts (we were not huge fans) and multiple tries at other types of pizza crusts, this is what has emerged from my kitchen. This is one of our favorite recipes, yet I feel like there may still be some revisions coming with temperatures and baking times. I realize the picture has cheese on it (we eat our pizza with cheese), but if you are dairy-free, you can certainly make it without! This is just a recipe for a basic crust. Pizza Crust (Primal/Paleo) Avocado Stuffed Burger. So this recipe was born thanks to some awesome farmers I always have at my local farmers market. 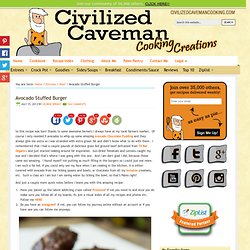 Of course I only needed 5 avocados to whip up some amazing Avocado Chocolate Pudding and they always give me extra so I was stranded with extra green fat and didn’t know what to do with them. I remembered that I had a couple pounds of delicious grass fed ground beef defrosted from TX Bar Organics and just started looking around for inspiration. Tzatziki Sauce. Before you call the paleo police, yes, this recipe contains dairy. 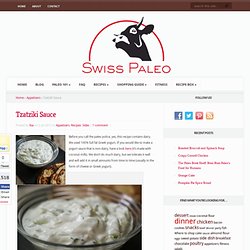 We used 100% full fat Greek yogurt. If you would like to make a yogurt sauce that is non-dairy, have a look here (it’s made with coconut milk). We don’t do much dairy, but we tolerate it well and will add it in small amounts from time to time (usually in the form of cheese or Greek yogurt). Tasty tzatziki We made some Gyros for dinner and they were just screaming for some tzatziki sauce. Paleo Pad Thai. So it’s been a while. 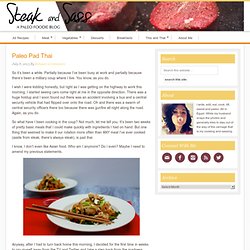 Partially because I’ve been busy at work and partially because there’s been a military coup where I live. You know, as you do. I wish I were kidding honestly, but right as I was getting on the highway to work this morning, I started seeing cars come right at me in the opposite direction. There was a huge holdup and I soon found out there was an accident involving a bus and a central security vehicle that had flipped over onto the road. Oh and there was a swarm of central security officers there too because there was gunfire all night along the road. Paleo Sushi Rolls with Cauliflower Rice. Paleo Sushi Rolls with Cauliflower Rice About Humble Foodie While we both love to eat well, life as AmeriCorps volunteers doesn’t afford us the budget to try every new restaurant and type of cuisine. 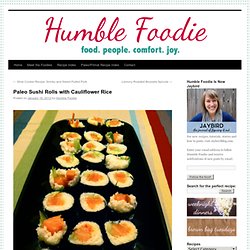 With many post-graduate expenses and limited financial resources, what’s a foodie to do? The answer is here, at The Humble Foodie. Instead of spending our hard-earned cash paying other people to cook for us, we’re spending as frugally as possible making delicious meals at home. This entry was posted in Alicia, Gluten-Free, Main Dish, Paleo/Primal and tagged cauliflower, cauliflower rice, maki, nori, paleo, rolls, salmon, sushi, whole30. Paleo Recipes: 10 You Really Should Be Making — PaleoNonPaleo. 3.5K Flares3.5K Flares × My family put up with a lot from me; I am not a great cook. Plus, I have a taste for burnt food that my family don’t particularly share. They have been stoic, in the main. Zucchini ‘Spaghetti’ With Kale Pesto Sauce. 1. On a chopping board, chop garlic and onion (red and green) and let sit for at least 10 minutes. 2. Chop kale and add to a container (for blending). 3. Squeeze lemon onto kale and set aside. 4. Chop green pepper, then add to container with kale. 5.

Heat a small frying pan and add coconut oil. Ingredients 4-6 organic garlic cloves 1 small organic red onion3-4 organic green onionsbunch of organic kale1 slice organic lemon (about 1/4 lemon)1 organic green pepper1 tbsp organic coconut oil (for frying), 1/4-1/2 cup of organic extra virgin olive oil (cold pressed)1/4 cup of organic pumpkin seeds (pre-soaked for at least 8 hours)1/4 cup of fluoride free waterHimalayan pink salt (to taste), organic black pepper (to taste) Level Health and Nutrition. So my original pot pie was good. It had a yummy crust made of almond meal. Recently, my body has decided that it does NOT like nuts or nut flour of any kind. Basic Spinach Quiche. This could be one of the simplest breakfasts you will ever make. That being said, let’s not restrict it to just a morning dish, as I can assure you it’s just as good any other time of the day. A New Take on Paleo Pizza. I love pizza. Oh, it’s a little ridiculous. And yes, I still get the rando pizza cravings from time to time, but about 99.99% of the time, MEATZA hits the spot and I can go on my merry way.

This time was different. Healthy cauliflower crust pizza recipe, chicago style. Paleo. Meatloaf Cupcakes. Beef Taco Salad with Avocado-Cilantro-Lime Dressing. I'm so excited about the fact that my local Sprouts market started carrying grass-fed beef! It does cost a little more, however several articles, including one from Mark's Daily Apple have helped me to realize that grass-fed beef is more healthful. The reason why it is advisable to choose grass-fed meat is because of a difference in the fat profile. Free Turkey Meatloaf with Sun-dried Tomatoes and Pecan Crust. Primal Kitchen: Getting the Family's Buy-In for Real Food Lunches. We get a LOT of questions about packing lunches. As often as I can point people to this post, or this post, or tell them there’s a chapter in the book devoted to lunches… I knew we needed new, fresh material on the site. That’s where the Primal Kitchen: A Family Grokumentary comes in. Paleo Butternut Squash Lasagna. Cauliflower Crust Pizza.