A New York Clock That Told Time Now Tells the Time Remaining. For more than 20 years, Metronome, which includes a 62-foot-wide 15-digit electronic clock that faces Union Square in Manhattan, has been one of the city’s most prominent and baffling public art projects. 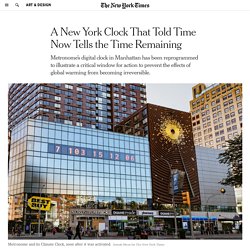 Its digital display once told the time in its own unique way, counting the hours, minutes and seconds (and fractions thereof) to and from midnight. But for years observers who did not understand how it worked suggested that it was measuring the acres of rainforest destroyed each year, tracking the world population or even that it had something to do with pi. On Saturday Metronome adopted a new ecologically sensitive mission. Now, instead of measuring 24-hour cycles, it is measuring what two artists, Gan Golan and Andrew Boyd, present as a critical window for action to prevent the effects of global warming from becoming irreversible. On Saturday at 3:20 p.m., messages including “The Earth has a deadline” began to appear on the display. Mr. Eventually, Mr. “It was kind of magic,” Ms. Origin of crops. 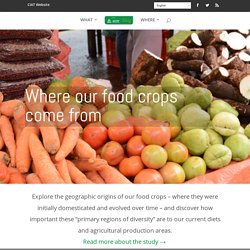 World Famous from The Teacher's Corner. Ads Blocked:That's OK! You are viewing a 'AD-Free' version of our site that has limited functionality You will get a MUCH IMPROVED application by simply allowing our advertisements to show! If you are completely against ads, we do have a fee supported site that contains no ads, and also offers a few extras over our ad supported site! BEFORE puchasing anything or leaving the site, may we suggest turning off your ad blocker and make 1 worksheet just see what you're missing by trying the ad supported version - we think you'll find it is well worth it! If not, we understand and thank you for giving us a try! Saving Options:Ad Block: NoneAd supported: 2 Word List Save SlotsPremium Subscriber: 10 Word List Save Slots Here are solutions to 95% of the problems people have!

Don't see this blue menu on the left AFTER creating your worksheet? Word List Saving Options Save your entered words for our other puzzle makers. Mal-den-code.de. Morse Code Translator. Text to Morse Just type letters, numbers and punctuation into the top box and the Morse code will appear in the bottom box with a "#" if the character cannot be translated. 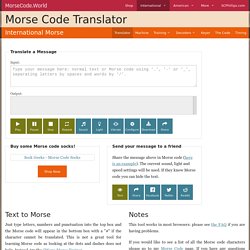 This is not a great tool for learning Morse code as looking at the dots and dashes does not help. Instead, try the CWops Morse Trainer. Morse to Text You can type Morse code into the top box using ". " for a dot and "-" or "_" for a dash. Sound, Light & Vibration The "Play", "Pause", "Stop" and "Repeat" buttons control the playback. Notes This tool works in most browsers: please see the FAQ if you are having problems.

If you would like to see a list of all the Morse code characters please go to my Morse Code page. Pigpen Cipher - Crypto Corner. The Pigpen Cipher is another example of a substitution cipher, but rather than replacing each letter with another letter, the letters are replaced by symbols. The cipher has an interesting history: although its true origins are unknown, it has been used by many groups. Most notoriously, it was the cipher of choice for use by the Freemasons, a secret society in the 18th Century.

In fact, they used it so much, that it is often referred to as the Freemasons Cipher. However, it was not exclusively used by them, with Union prisoners in Confederate camps using it to communicate in the American Civil War. EncryptionThe encryption process is fairly straightforward, replacing each occurence of a letter with the designated symbol. DecryptionThe decryption process is just the reverse of the encryption process. DiscussionThe Pigpen Cipher was used by the Freemasons in many aspects of their lives, and one of the most common still seen today is on gravestones. Rebus Generator.