Learn English-Creole: To Put = Mete – Simple Present, Simple Past, Simple Future and Conditional. 10 Ways to Keep Your Class Interesting. Have you ever been in the middle of teaching a class, glanced at your students, and caught them staring into space? 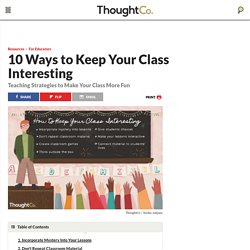 Just when you think you've created the perfect lesson plan or engaging activity, you may find that your students are unfocused and out to lunch. Yet it's essential that you find ways to keep your classes interesting so your students can absorb and retain the information that you present. For decades, educators have been trying new teaching strategies to keep their students on their toes and get them excited about learning.

Although some strategies have failed, others have been found to be quite effective.

The 10 oldest languages that are still spoken today. – The Language Nerds. As of today, the world has 7111 languages according to Ethnologue. 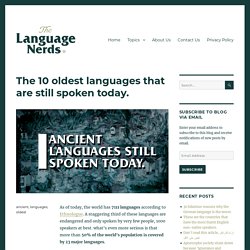 A staggering third of these languages are endangered and only spoken by very few people, 1000 speakers at best. what’s even more serious is that more than 50% of the world’s population is covered by 23 major languages. Languages appeared about 100.000 years ago and have been evolving ever since. The languages the world is trying to learn, according to Duolingo. – The Language Nerds. Duolingo, the popular language learning service, has recently hit more than 300 million users, across all 195 countries. 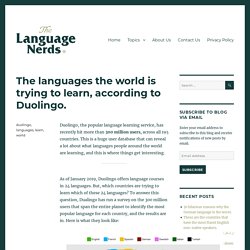 This is a huge user database that can reveal a lot about what languages people around the world are learning, and this is where things get interesting. As of January 2019, Duolingo offers language courses in 24 languages. But, which countries are trying to learn which of these 24 languages? To answer this question, Dualingo has run a survey on the 300 million users that span the entire planet to identify the most popular language for each country, and the results are in. BBC News - The Sami are the only indigenous people in the... 30 hilarious reasons why the German language is the worst. – The Language Nerds. German is the most widely spoken language in the European Union. 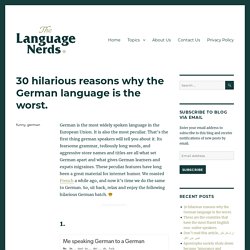 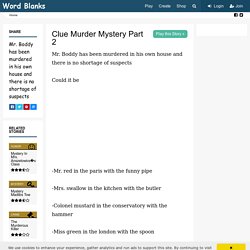 SERIOUSLY, how have I never heard of this website before? This site is FULL of wonderful interactive reading strategy games... ARE ESL/EFL SOFTWARE PROGRAMS EFFECTIVE FOR LANGUAGE LEARNING? Metacognition and EFL/ESL reading. 10. Introduction Data from the most recent US Census indicate the number of people who speak a language other than English in the home doubled between 1980 and 2000 while the overall population grew by one quarter during that same time (US Census, 2007). 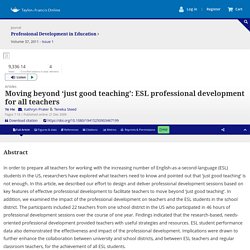 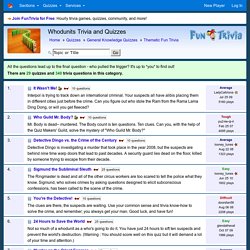 10 questionsAverage, 10 Qns, LadyCaitriona, Jul 25 09 Interpol is trying to track down an international criminal. Your suspects all have alibis placing them in different cities just before the crime. Can you figure out who stole the Ram from the Rama Lama Ding Dong, or will you get fleeced? Average LadyCaitriona Jul 25 09 5160 plays Who Guild Mr. Whodunit Game ~ Online Whodunit Game ~ Whodunit Crime Solving Game. Who done it whodunit game. Who Done It? 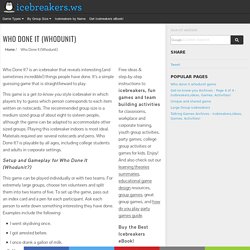 Is an icebreaker that reveals interesting (and sometimes incredible!) Things people have done. It’s a simple guessing game that is straightforward to play. Free Printable Harry Potter-Inspired Mad Libs for Writing Fun - Rock Your Homeschool. EDG4410 new. 11 Apps to Build Literacy for Elementary ELs. In my last blog, I talked about online resources for building English learners’ literacy skills. 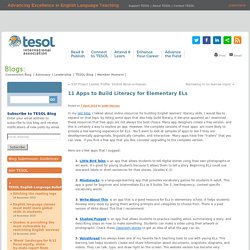 I would like to expand on that topic by listing some apps that also help build literacy. It became apparent as I examined these resources that free apps are not always the best choice. Many app designers create a free version, and this is certainly a way to explore an app. However, the complete versions of most apps are more likely to provide a real learning experience for ELs. What's Behind Hawaii's Rising Test Scores For English Learners. Last month’s release of Hawaii student performance results on the 2019 “Nation’s Report Card” showed little change from the previous assessment in 2017, except in one area: reading and math scores among Hawaii’s fourth grade English language learners. 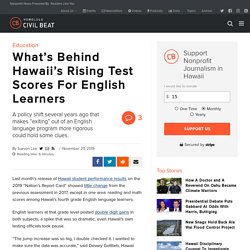 English learners at that grade level posted double digit gains in both subjects, a spike that was so dramatic, even Hawaii’s own testing officials took pause. “The jump increase was so big, I double checked it. I wanted to make sure the data was accurate,” said Dewey Gottlieb, Hawaii state coordinator for the National Assessment of Educational Progress. In this June 2018 photo, a Queen Kaahumanu Elementary School ELL class works in the school library. More than one-third of the student body is comprised of English learners. The Brain Gym® Program - Breakthroughs International. Most of us probably aren’t aware of how hard we are working in life. It makes sense—we’ve only ever experienced our own eyes, our own ears, our own brain, our own movement patterns, and our own way of interacting with the world.

But what if it could be easier? The evolution of the alphabet: from 1750 BC to today. – The Language Nerds. The Alphabet of the English language and most of the European languages not thought of at the spur of the moment. English Conversation Class (ESOL) @ Northwest Branch Library. Seminole County Government offices will be closed on Monday, November 11th, 2019 in observance of Veterans Day. Our offices will resume normal business hours on Tuesday, November 12th, 2019. English Conversation Class (ESOL) @ Northwest Branch Library (Lake Mary) Events Contact us MAIN OFFICE 1101 East First Street Sanford, FL 32771. 3 Tips for Teaching English to Working Adults. e3l1proofreading. Morphological Analysis as a Vocabulary Strategy for L1 and L2 College Preparatory Students. December 2009 — Volume 13, Number 3.