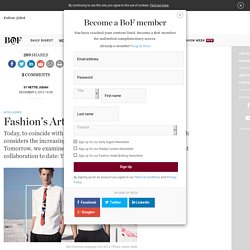 Not the bronzed, beefcake Miami man of old, but a new version: the languid aesthete, picking his slim-hipped way around the art circuit to emerge blinking in the sun of its winter highlight. This week is the eleventh edition of the Art Basel Miami Beach fair. The Moral Fabric of Pakistan’s Fashion Week. KARACHI, Pakistan — Pakistan’s fledgling fashion industry knows that to keep business rolling, the show must go on. 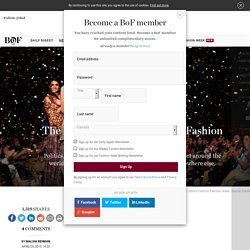 Earlier this month, organisers of the Telenor Fashion Pakistan Week (TFPW) in Karachi considered postponing the event because of a major political rally taking place in the city. It was a risky time to hold a high-profile fashion week with a guest list including political dignitaries, foreign media and a considerable number of the city’s affluent residents. In Digital London, Technology and Fashion Collide. Today BoF founder Imran Amed examines the fruitful interaction between London’s rising technology and fashion scenes for Wallpaper* magazine, where a version of this article first appeared. 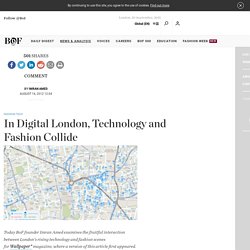 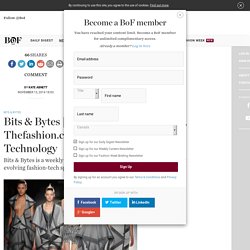 “Competition in Retail Space Heats Up” (The Financial Times)“The threat from online competitors is leading more traditional retailers to consider embracing even seemingly outlandish technologies.” “Inside Refinery29′s Video Strategy” (Digiday)“Since opening its doors in 2005, Refinery29 has grown to 200 employees, including a 10-person video production team. The site attracted nearly 11.1 million U.S. unique visitors in September, up 75 percent from September 2013.” “E-Commerce Aggregator Thefashion.com Raises $1.7M For Further European Expansion” (TechCrunch) “Currently operating in the U.K., U.S., and Denmark, the London and Copenhagen-based company has just closed a $1.7 million round of funding to further expand in Europe.” 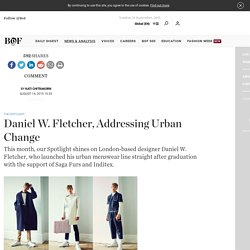 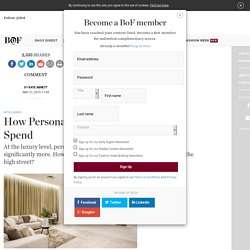 So says the ‘By Appointment’ personal shopping service offered by London department store Harrods. Indeed, the store’s personal shopping team can track down a specific piece of fine jewellery, host a private in-store runway show or organise a one-on-one fitting with a designer. At the luxury level, personal shoppers don’t just provide styling advice. 5 Women Leaders on Getting Ahead in Fashion. LONDON, United Kingdom — Women are, by far, the primary consumers of fashion, but more often than not, their point of view is not reflected in the business decisions of fashion companies. 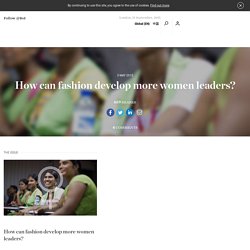 That's because, although women make up more than 70 percent of the industry's total workforce, they hold less than 25 percent of leadership positions in top fashion firms. Women's fashion now mainly influenced by stars like Cara Delevingne. 48 per cent of women say celebrities impact strongest on personal styleNew survey reveals only 31 per cent turn to best friend for style advice 14 per cent of women aged 18-35 ask mother's opinion on clothes first By Caroline Mcguire for MailOnline Published: 13:23 GMT, 16 November 2014 | Updated: 15:44 GMT, 16 November 2014 Almost half of women trust celebrities more than their own friends and mothers when it comes to personal style. 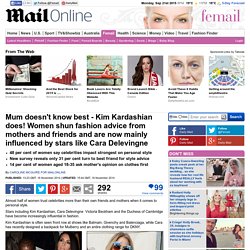 Stars including Kim Kardashian, Cara Delevingne Victoria Beckham and the Duchess of Cambridge have become increasingly influential in fashion. Kim Kardashian is often seen front row at shows like Balmain, Givenchy and Balenciaga, while Cara has recently designed a backpack for Mulberry and an entire clothing range for DKNY. 48 per cent of women say celebrities have the strongest impact on their personal style. Kim Kardashian has a big impact on women's personal style. Why Do Celebrities Influence Fashion Trends? Celebrities shape and influence fashion trends. 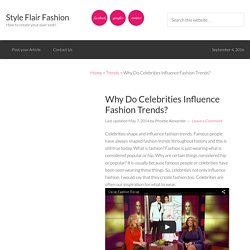 Famous people have always shaped fashion trends throughout history and this is still true today. What is fashion? Fashion is just wearing what is considered popular or hip. Why are certain things considered hip or popular? It is usually because famous people or celebrities have been seen wearing these things. Young girls are trying to figure out their place in the world. People's Choice Awards 2015: Best of the Red Carpet. January 7, 2015 @ 9:48 PM The 2015 People's Choice Awards are underway, and we're loving all the looks that hit the red carpet! 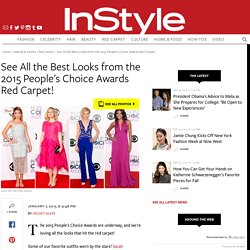 In Ethical Fashion, Desirability is Sustainability. NEW YORK, United States — Over the past ten years, the eco-fashion movement has been gathering steam. Welcome Fur with High Standards. HELSINKI, Finland — Fur obviously has a place in fashion. Just take a look at the most recent runway shows in the world’s major fashion capitals. More than 70 percent of the latest autumn/winter and haute couture season collections featured fur. Fur designs have been booming at retail too.

Simply put, designers want to use it and consumers want to buy it. How ethical are high street clothes? In Ethical Consumer's latest product guide to clothing, which ranks 25 high street clothing brands on how ethical their practices are, M&S came top of the table. Zara and H&M come second and third respectively, with Asda at the bottom with a score of 0.5 out of 20, followed by Bonmarche with 1.5.

But what do these rankings really mean? The scores on Ethical Consumer's product guides are compiled from ethical ratings using data in the public domain, including from civil society publications and company sustainability reports. The ratings cover around 300 topics in 19 areas in five main categories; animals, environment, people, politics and product sustainability. The database, which is updated daily, is a result of more than 20 years' work conducting primary and secondary research and systematically organising it using our ratings system.

Empty promises. H&M’s “sustainability” report hides the unsustainable reality of fast fashion. At first glance, there seems to be nothing unusual about Ridley Road Market. Like any other London market, there are stalls selling fresh fruit and vegetables, cheap electronics, artificial jewelry, and other bits and bobs. Then, the smell hits you. Behind the makeshift stalls are butchers’ shops. Brands Invest in ‘New Generation of Materials’ PALO ALTO, United States — When Patagonia was in search of an eco-conscious alternative to neoprene, it considered wool. But then the outdoor apparel company came across Yulex, an Arizona-based supplier of latex-free rubber. Though the start-up was primarily focused on the commodities market, it had the tools to develop wetsuits that rivalled the performance, insulation capacity, stretch and durability of those made with traditional neoprene, but were better for the environment. Over a four-year period, Patagonia shouldered the costs of product development and guided Yulex on the needs of its consumers.

By the end of 2013, the unlikely pair launched a plant-based wetsuit, using a desert shrub native to North America, on Patagonia’s website and in a limited number of surf shops. Shortly thereafter, the license was opened to the rest of the market. Patagonia isn’t alone in focusing its attention on cutting-edge materials. The Year Fashion Woke Up. The Growth of Sustainable Fashion in the UK, From Haute Couture to High Street  Has campaigning for an ethical fashion industry had any impact? Campaigners have been battling for an ethical fashion industry ever since the first sweatshop scandals broke back in the 1990s.Even now, Ethical Consumer magazine's latest buyers' guide reveals that a sweat-free high street is still a long way off.

Anton Marcus, joint secretary of the Free Trade Zones and General Services Employees Union in Sri Lanka believes the single biggest barrier to progress is access to free trade unions: "Our biggest fight is with the supplier companies who are strongly anti-union and the government, which refuses to implement its International Labour Organisation commitments and allow our garment workers to join unions. " People Power Can Clean Up Toxic Fashion.

What Would a ‘Grexit’ Mean for Luxury Fashion? The Global Economics of Clothing: Part 2 - Fashion. Introduction. Economy Of Fashion: How Different Trends Reflect The Financial State. The fashion business - BBC News. Image copyright AFP. Luxury Must Take Hold of Its Digital Destiny. LONDON, United Kingdom — Luxury companies have long relied on “heritage” to lend prestige to their products. The ‘Made In’ Dilemma: To Label, or Not to Label. Luxury Brands Are Wrong to Ignore Africa. HR Boutique: Future of the Jobs in Luxury, Fashion and Design. Do 'Accessible Luxury' Brands Have an Inherently Limited Lifespan? Chanel vs. Chanel: Coco's Brand Steps Off the Runway and Into the Courtroom. Luxury brands continue to lag in omnichannel retail: report. In India, Luxury Brands Need Localised Strategies.