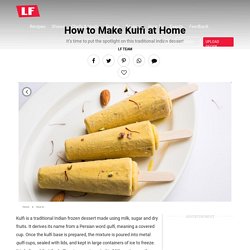 It derives its name from a Persian word qulfi, meaning a covered cup. Once the kulfi base is prepared, the mixture is poured into metal qulfi cups, sealed with lids, and kept in large containers of ice to freeze. It is believed that the kulfi recipe was invented in 16th-century north India, which was then part of the Mughal Empire. Luscious Rasmalai Recipe. West Bengal has contributed many sweet dishes to the nation and one such is the melt-in-the-mouth rasmalai.

The name is a combination of two words, 'ras' means juice and 'malai' means cream. This milk-based dessert consists of spongy rasgullas or paneer balls doused in thick and creamy milk, garnished with kesar, pistachios and almonds. This is one of the popular sweet dishes of India so it is easily available in the market, whether you go for the ones from a sweet shop or the packaged variety found in supermarkets.

However, the best bet is to make it at home. Rasmalai is one of the most demanded sweet dishes during the festive season but even on a regular day, rasmalai is the perfect sweet dish to complete a meal. Rasmalai Recipe Ingredients for Rasmalai Recipe200 gms cottage cheese or paneerRefined flour for dusting1/2 cup sugarWater (to make sugar syrup)1 litre milk4 green cardamom or elaichi5 strands of kesarYellow food colouring1/2 cup chopped almonds1/2 cup chopped pistachios. Vegetable Pulao Recipe. Also known as pilaf or pilau, Pulao is a simple one-pot meal with a mysterious past. 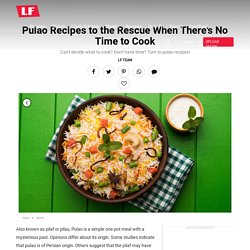 Opinions differ about its origin. Some studies indicate that pulao is of Persian origin. Others suggest that the pilaf may have originated in ancient India only to travel to South Asia and the Middle East before becoming an integral part of the local cuisines. While the jury is still out on its origin, there's no doubt that pulao is a well-loved dish. Apart from Indian cuisine, variations of pulao exist in Balkan, Middle Eastern, Eastern Europe, South Caucasian, Central and South Asian, East African, Latin American and Caribbean cuisines! The base spices in the pulao recipe and cooking method remain the same but there are several variations in the type of gravy, vegetables and meat used. Vegetarian Pulao RecipesVeg Pulao RecipeYou can make your version of the veg pulao recipe with your choice of veggies. 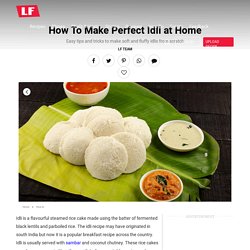 The idli recipe may have originated in south India but now it is a popular breakfast recipe across the country. Idli is usually served with sambar and coconut chutney. Lauki Chana Dal Recipe. Dal is that one humble dish that holds a place of importance in almost every household across the Indian subcontinent. 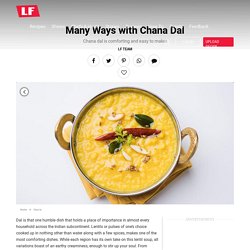 Lentils or pulses of one’s choice cooked up in nothing other than water along with a few spices, makes one of the most comforting dishes. While each region has its own take on this lentil soup, all variations boast of an earthy creaminess, enough to stir up your soul. From masoor and tur, yellow and green, to everything in between – almost all lentils are powerhouses of nutrition, helping us raise a toast to health. Of all the dals, did you know that the humble chana dal, aka Bengal gram, acts as a great calorie buster and could help you get ahead in your weight loss race? Apart from lending a nice nutty taste and soft buttery texture to your dals, chana dal is also high in fibre, keeping you full for long, thus controlling your appetite. Also Read: How to store lentils the right way Lauki Chana Dal RecipeMake the chana dal recipe with lauki. 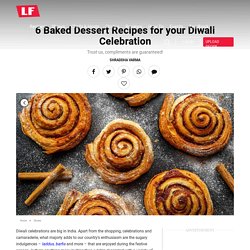 Apart from the shopping, celebrations and camaraderie, what majorly adds to our country’s enthusiasm are the sugary indulgences – laddus, barfis and more – that are enjoyed during the festive season. Is there anything more inviting than a table decorated with a variety of desserts? Well, we don’t think so! We scoured through our sweet recipes collection to bring you six unique treats to bake this Diwali. Trust us, these delicious easy-to-bake dessert recipes are going to impress your guests and how! Roasted Sweet Potato Tartjwplayer Looking for a dessert that has a combination of sweet and savoury flavours? Also read: From Breakfast to Dinner – More Sweet Potato Recipes to Try at Home Mocha Cake with Creamy Butter FrostingjwplayerCalling all coffee lovers! Orange Pistachio Cinnamon RollsjwplayerWho said Diwali treats must be limited to traditional sweets only?

Also read: Veg Finger Foods for your Diwali Party. Best Keema Recipe. Once considered a poor man’s dish, today, keema is one of the popular non-vegetarian food delicacies in India. 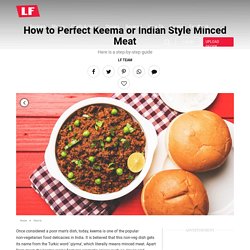 It is believed that this non-veg dish gets its name from the Turkic word ‘qiyma’, which literally means minced meat. Apart from meat, the keema recipe features aromatic spices such as cloves and cinnamon and garlic. Keema can be served as a breakfast item or as the hero dish of the dinner/lunch table.