"Need A Mom" service starts in Brooklyn. Pr-jmr.14.0175-experience-variety.pdf. Has Net-a-Porter found the holy grail of 21st-century fashion? Despite reports to the contrary, Net-a-Porter has not launched a new social network. 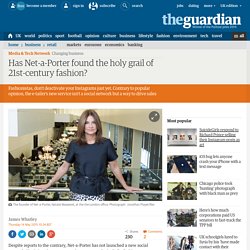 Nor is it trying to recreate Instagram exclusively for fashion. What it has done, however, is announce a new and advanced way for its consumers to buy more clothes. Explicit cookie consent. Why Pret A Manger gives away so much free food to customers. On the house, just because. 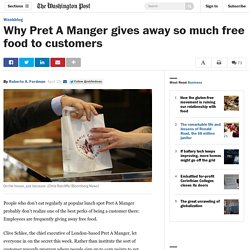 (Chris Ratcliffe/Bloomberg News) People who don't eat regularly at popular lunch spot Pret A Manger probably don't realize one of the best perks of being a customer there: Employees are frequently giving away free food. Clive Schlee, the chief executive of London-based Pret A Manger, let everyone in on the secret this week. Rather than institute the sort of customer rewards program where people sign up to earn points to get occasional free stuff, Schlee tells employees to give away a certain amount of food and drinks. 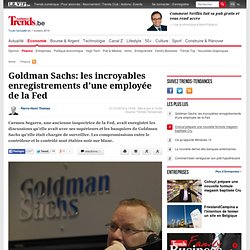 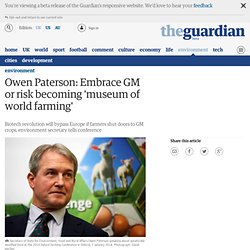 Owen Paterson, a long-standing fan of biotechnology, warned the Oxford Farming Conference: "The longer Europe continues to close its doors to GM, the greater the risk that the rest of the world will bypass us altogether. "Europe risks becoming the museum of world farming as innovative companies make decisions to invest and develop new technologies in other markets. " Paterson cited a study last June that found "compelling evidence" that GM crops could benefit farmers, consumers, the environment and the economy. 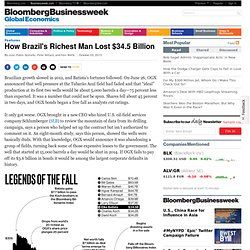 He’s beaming, flashing victory signs. He has on an orange-and-gray racing jacket of the type he wore as a champion speedboat racer two decades before. It clashes badly with his bright pink tie and gray pinstripe suit, but he doesn’t appear to care—in fact, the loud ensemble only serves to highlight a faux oil-stained handprint across the jacket’s left pocket—a corny hint about why he’s asked everyone here. It’s a cloudy April afternoon in 2012, but Batista is full of blue skies and endless vistas. Skip Silicon Valley: Why Smart Startups Start In Europe. Surge in purchases of counterfeit goods. It is now a €1bn market across Europe, growing by the day, and one in which a new generation of brand-obsessed British consumers are prepared to risk their health, and even their lives, in order to save money. 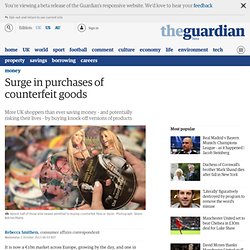 Counterfeit goods have gone mainstream. A new report by accountants PwC reveals British adults admitting that they regularly buy fake designer clothes, bags, accessories and perfumes as well as potentially lethal counterfeit alcohol, medicines and cigarettes. Illegal copies of films, car parts and even dangerous electrical goods are also in big demand. The report shows that 18% of consumers admit to buying fake alcohol, despite the presence of toxic solvents that can cause blindness and even death. At Wal-Mart in Mexico, a Bribe Inquiry Silenced. The former executive gave names, dates and bribe amounts. 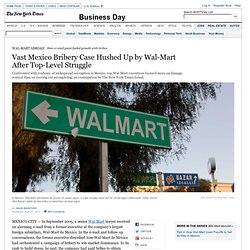 He knew so much, he explained, because for years he had been the lawyer in charge of obtaining construction permits for Wal-Mart de Mexico. Wal-Mart dispatched investigators to Mexico City, and within days they unearthed evidence of widespread bribery. They found a paper trail of hundreds of suspect payments totaling more than $24 million. They also found documents showing that Wal-Mart de Mexico’s top executives not only knew about the payments, but had taken steps to conceal them from Wal-Mart’s headquarters in Bentonville, Ark. In a confidential report to his superiors, Wal-Mart’s lead investigator, a former F.B.I. special agent, summed up their initial findings this way: “There is reasonable suspicion to believe that Mexican and USA laws have been violated.” The lead investigator recommended that Wal-Mart expand the investigation. Instead, an examination by The New York Times found, Wal-Mart’s leaders shut it down. Ms. Ms. Mr. Goldman Sachs to invest $9.6m in New York inmate rehabilitation.

New York's notorious Rikers Island jail would not immediately suggest an obvious source of lucrative profits for the banking industry. 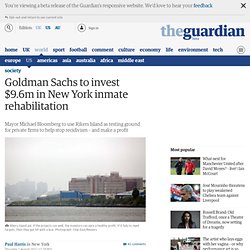 But investment giant Goldman Sachs is now hoping to make potentially millions of dollars by helping persuade the prison's inmates to turn over a new leaf. The strange turn of events is the consequence of an announcement on Thursday by New York City mayor Michael Bloomberg that the facility is to be the testing ground for a controversial new source of funding for social projects called "social impact bonds".

The device, pioneered in Britain, will be the first of its kind for an American city and essentially taps private investors for funds to run projects that have normally been the concern of the state or non-profits. If the projects run well, the investors can earn a healthy profit. If it fails to meet targets, then they get hit with a loss. It is structured so that if the scheme reduces recidivism by more than 10% it could make as much as $2.1m. Le souvenir amer du lait rance de Parmalat. Actualité Correspondante en Italie "Je porterai pour toujours la marque indélébile des souffrances causées à ceux qui par ma faute ont subi d’énormes pertes " Face au tribunal de Bologne, le 26 mars dernier, Calisto Tanzi, malade et affaibli, fait son mea culpa d’une voix à peine audible. 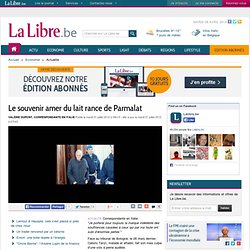