YouTube. How Often Should I Charge My Gadget's Battery to Prolong Its Lifespan? 10 Things You Never Knew You Could Do On Your iPad — Apple News, Tips and Reviews. 6 Tips to Free Up Tons of Storage Space on iPad, iPhone, and iPod Touch. Are you feeling the pinch of the limited storage capacity on an iPad, iPhone, or iPod touch? 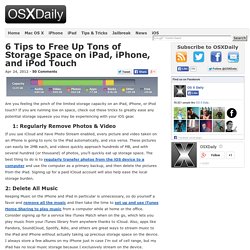 If you are running low on space, check out these tricks to greatly ease any potential storage squeeze you may be experiencing with your iOS gear. 1: Regularly Remove Photos & Video If you use iCloud and have Photo Stream enabled, every picture and video taken on an iPhone is going to sync to the iPad automatically, and vice versa. These pictures can easily be 2MB each, and videos quickly approach hundreds of MB, and with several hundred (or thousand) of photos, you’ll quickly eat up storage space. The best thing to do is to regularly transfer photos from the iOS device to a computer and use the computer as a primary backup, and then delete the pictures from the iPad. 2: Delete All Music 3: Find Where Storage is Being Used and Clean Up It’s easy to check how much storage is available in iOS, and the same screen tells you which apps are taking up the most space. 5: Remove Watched Videos All done? 8 Typing Tips for iPad and iPhone That Everyone Should Know and Use.

Learning to type well on the touchscreen keyboards in iOS that we all use on the iPhone, iPad, and iPod touch can take some time. 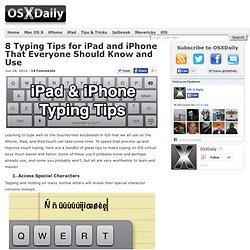 To speed that process up and improve touch typing, here are a handful of great tips to make typing on iOS virtual keys much easier and faster. Some of these you’ll probably know and perhaps already use, and some you probably won’t, but all are very worthwhile to learn and master. 1. Access Special Characters Tapping and holding on many normal letters will reveal their special character versions instead. 2. iOS lets you set shortcuts to automatically expand to larger blocks of text or words. Open Settings and tap “General” followed by “Keyboard”Tap “Add New Shortcut” and enter the full phrase and then the shortcut, followed by “Save” 3. Unlike a traditional keyboard, the iOS virtual keyboards are very forgiving. iPad Lessons. iPad Tips And Tricks. 10 Excellent iPad Applications for Teachers.

With the iPad2 on the launching pad, it’s a great time to share this list of useful iPad apps for teachers from guest writer Paula Dierkens. 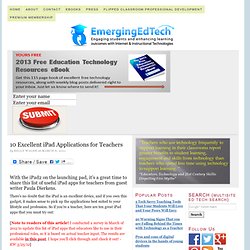 There’s no doubt that the iPad is an excellent device, and if you own this gadget, it makes sense to pick up the applications best suited to your lifestyle and profession. So if you’re a teacher, here are ten great iPad apps that you must try out: [Note to readers of this article! I conducted a survey in March of 2012 to update this list of iPad apps that educators like to use in their professional roles, so it is based on actual teacher input. The results are available in this post. 1. 2. 3. 4. 5. 6. 7. 8. 9. 10. By-line: This guest post is contributed by Paula Dierkins, who writes on the topic of PhD Online Degree . Seven Hidden Features of the iPad Camera Connection Kit. Many people wouldn’t take a second look at the $29 iPad Camera Connection Kit because they could simply transfer photos and videos from their computer via iTunes. 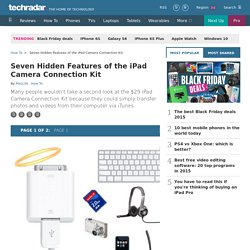 But, this little unsuspecting accessory has hidden powers, with which comes great responsibility. Not really, but there are a few things that the Dock Connector to USB dongle does that aren’t advertised. The things it can connect to could save you some money, and add features, too! So read ahead to find out the seven hidden features Apple doesn’t want you to know the Camera Kit can do. Attach USB Keyboards - Savings: $69 If you already own a USB keyboard, like the one connected to your Mac, then you are in luck. Apple’s own iPad Keyboard Dock costs $69 to do something that you can do with a $29 adapter and a USB keyboard. Just connect your iPad USB camera connector, plug in your USB keyboard, and you're good to go. USB Audio Devices - Savings: $30-100 If your headset has a mic on it, you'll be able to utilize that as well.

The little things in life!