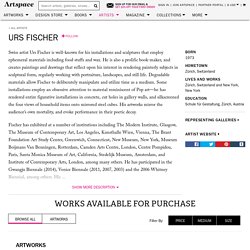 Thank you for visiting Artspace.com (the "Site") owned and operated by Artspace LLC. ("Artspace"). Your use of the Site indicates that you have read, understood and agree to these terms of use ("Terms"). If you do not agree to these Terms, you may not access or use the Site. We may modify the Terms from time to time without notice to you.

A MEETING WITH URS FISCHER - CRASH Magazine. On the occasion of the release of the Louis Vuitton x Urs Fischer collaboration, rediscover our interview with the American artist. 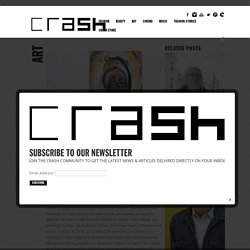 Swiss-born, New York-based artist Urs Fischer has made the Big Apple his personal playground for pushing contemporary art to its limits, reshaping and melting away the codes of this world in his own way. Occupying the intersection of conceptual art and the absurd, his works take on many different forms, from collage and painting to food – as in Bread House, his house made from loaves of bread created in 2004.

In October, he unveiled Leo (George & Irmelin), a wax sculpture representing Hollywood star Leonardo DiCaprio with his parents, at Gagosian Gallery in Paris. The candle, lit at the opening of the exhibition, burned until December 20. Armelle Leturcq: Our new art issue is dedicated to the idea of experimentation. Urs Fischer: It came by chance that Spencer and I had a show at Gagosian Gallery in Paris at the same time, and we are also close friends. Kanye West - Good Morning. From a Mushroom Cloud, a Burst of Art Reflecting Japan's Psyche. 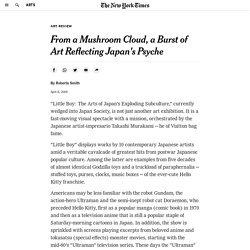 Murakami's role in recent Japanese art is complex. To cite American models, he has functioned a bit like a combination of Jackson Pollock, the chief innovator, and Clement Greenberg, the chief explicator, of Abstract Expressionism. He was one of the first Japanese Neo Pop artists to break the ice in terms of recycling Japanese popular culture. Then, in Mr. Murakami's work, writings and the exhibitions he organized, Neo Pop mutated into the more historically conscious Superflat style, which embraces the emphasis on surface decorations and patterns indigenous to Japanese visual traditions. The show is a sociological argument made with visual evidence, but because this evidence comes from one of the world's most aesthetically sophisticated and refined cultures, it packs a tremendous visual punch. 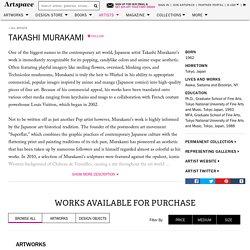 Thank you for visiting Artspace.com (the "Site") owned and operated by Artspace LLC. ("Artspace"). Your use of the Site indicates that you have read, understood and agree to these terms of use ("Terms"). If you do not agree to these Terms, you may not access or use the Site. Takashi Murakami Artist Interview – Takashi Murakami Blurs the Lines Between Low Culture and High Art. Artist Takashi Murakami loves all things anime and manga—so much so that he often refers to himself as an “otaku,” loosely translated as a “sci-fi geek.” 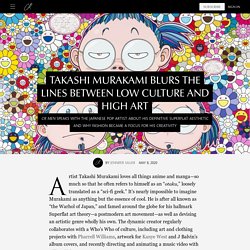 It’s nearly impossible to imagine Murakami as anything but the essence of cool. He is after all known as “the Warhol of Japan,” and famed around the globe for his hallmark Superflat art theory—a postmodern art movement—as well as devising an artistic genre wholly his own. The Hysteria of This Flower Explained. How This Guy Builds Mesmerizing Kinetic Sculptures. Alexander Calder 1898–1976. Alexander Calder (; July 22, 1898 – November 11, 1976) was an American sculptor known both for his innovative mobiles (kinetic sculptures powered by motors or air currents) that embrace chance in their aesthetic, and static "stabiles" monumental public sculptures. 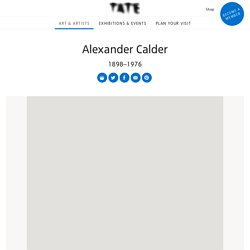 He didn't limit his art to sculptures; he also created paintings, jewelry, theatre sets and costumes. Calder preferred not to analyze his work, saying, "Theories may be all very well for the artist himself, but they shouldn't be broadcast to other people. " Born into a family of artists, Calder's work first gained attention in Paris in the 1920s and was soon championed by the Museum of Modern Art in New York, resulting in a retrospective exhibition in 1943. Major retrospectives were also held at the Solomon R. Kinetic art. The word kinetic means relating to motion. 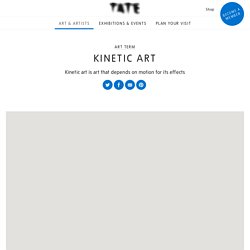 Since the early twentieth century artists have been incorporating movement into art. ‘Kinetic Construction (Standing Wave)’, Naum Gabo, 1919–20, replica 1985. Naum Gabo 1890-1977 T00827 Kinetic Sculpture (Standing Wave) 1919-20 This work was made in Moscow in the winter of 1919-20 and was first exhibited in the open-air exhibition in the Tverskoi Boulevard there in August 1920 of works by Gabo, Pevsner and several younger artists arranged to coincide with the publication of the Realistic Manifesto. 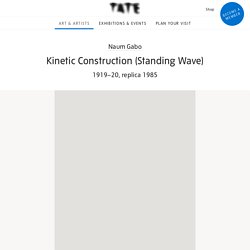 The Manifesto had been written by Gabo and was signed jointly by him and his brother Noton (Antoine) Pevsner. Artist Pablo Valbuena Teams Up with La Prairie to Transform the Miami Beachfront During Art Basel – SURFACE. For two nights during Art Basel Miami Beach this December, the waterfront of South Beach took on a dazzling new dimension. 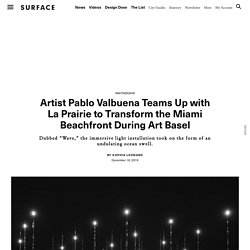 “Wave,” an immersive installation created by Spanish-born contemporary artist Pablo Valbuena, created the effect of light dancing on an undulating wave. Over a twelve-minute cycle, 25 shafts of LED light columns blinked on and off to mimic the sense of a giant swell rising, falling and rising again. “The idea was to depict a sculptural volume unfolding over time,” Valbuena says. “It’s the shape of light seized in perpetual motion.” Beauty Wave: La Prairie partners with Pablo Valbuena at Miami Art Basel. La Prairie continued its Art Basel partnership through its latest artist collaboration with artist Pablo Valbuena US. 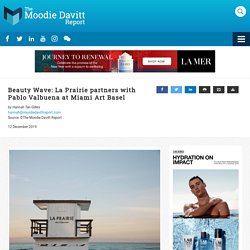 “We strive to select artists who share La Prairie’s values. Discover various types of kinectic art installations as modern sculptures. Kinetic ​art ​impacts you with its motion ​Kinetic sculpture relies on movement for visual and emotional impact. It has taken a wide variety of forms, from motorised mechanics to naturally powered elements in both indoor and outdoor settings. Many of the most well-known examples of kinetic sculpture exist as dramatic, large scale outdoor public art and harness natural forces of energy, such as solar power, gravity, wind or magnetism.

Anthony Howe’s intricate, wind powered machines are a prime example. ​ Kinetic art – Art Term. Kinetic Art and the Age of Robotics - What Can We Expect? Derived from the Greek word kinesis, representing motion or change in Aristotelian philosophy, Kinetic art refers to works that feature real or apparent movement. In its widest definition, it includes a number of different art forms, media types and styles.