Raspberry Pi Owncloud (dropbox clone) Now we have download the software we need to configor it. First off we need to install PHP apc $ sudo pecl install apc After that is done we need to create the apc.ini $ sudo nano /etc/php5/cgi/conf.d/apc.ini In to that file we need to add the following extension=apc.so apc.enabled=1 apc.shm_size=30 Once added the file needs saving Next up we have to change the PHP.ini to change the max upload file so we can add large file and add the APC externsion to PHP.

How to make a very basic instant messaging program in pure Java. Talk2Me: Java instant messenger. Introduction What I am trying to introduce here is a full fledged Java Instant messenger, which has all the features supplied by commercial messengers like Yahoo or MSN. 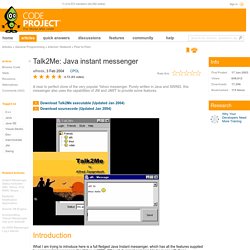 Although it cannot compared to be in par with those messengers, it is an attempt by me to learn Advanced Java and JNI concepts. The challenges I faced here were often overcome by referring to numerous sites, which nearly zeroes in or completely solved the issues I faced at that point of time. It improved my learning curve and also believe would do the same to you too. Ofcourse, there are some bugs and glitches, which I hope you would excuse.

System Requirements Window/WinNT/Solaris(To run the chat server)Windows/WINNT (For running the chat client)JDK Ver1.3 or higher(Although I havent tested with lower versions of that) Challenges faced. Eigenen Messenger Programmieren. Simple-android-instant-messaging-application - Simple IM application runs on Android. Simple Android Instant Messaging Application Simple because it is not a kind of application for end users. 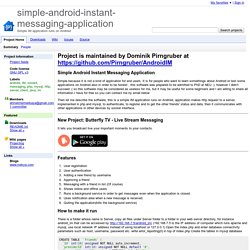 It is for people who want to learn somethings about Android or test some applications on Android also in order to be honest , this software was prepared to be admitted to PhD at NEU :), however I didn't succeed :( so this software may be considered as useless for me, but it may be useful for some beginners and I am willing to share all information I have for free so you can contact me by email below Then let me describe the software, this is a simple IM application runs on Android, application makes http request to a server, implemented in php and mysql, to authenticate, to register and to get the other friends' status and data, then it communicates with other applications in other devices by socket interface. New Project: Butterfly TV - Live Stream Messaging. Create an Instant Messaging app using Google Cloud Messaging (GCM) Instructions: 1. 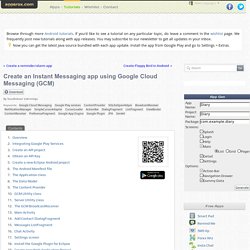 Install the app from Google Play. 2. Download the server application project from here. Import the project into your Eclipse workspace. 3. Deploy the server application on Google App Engine as described here. 4. Enter the Server URL (from step 3) in browser and verify the Demo Server is up and running. 5. Now the app would register itself with the server and a chat ID is generated.

Android Messaging App Tutorial with Parse. This tutorial will teach you how to build an instant messaging app for Android using the Sinch Android SDK. 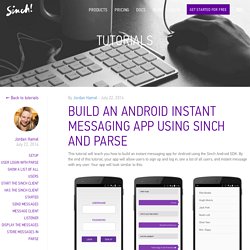 By the end of this tutorial, your app will allow users to sign up and log in, see a list of all users, and instant message with any user. Your app will look similar to this: The finished source code for this tutorial can be found on our github. To get the ball rolling, I have created a skeleton project that you can clone from this Github repository. This skeleton project includes: a basic login activity, a login layout, a messaging conversation layout, and some graphics to make things look nice! Building your first native Android mobile messaging app (IBM messaging) You can easily get a sample Android app exchanging messages with an MQTT server. 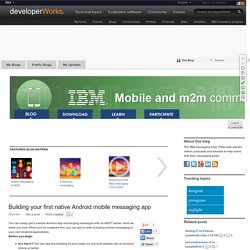 Here we show you how. When you’ve mastered this, you can get on with including mobile messaging in your own Android applications. Before you begin In a hurry? You can skip the building bit and install our pre-built sample into an Android phone or tablet. About this task The MQTT client sample Java™ app for Android is called mqttExerciser. You can either build the sample app yourself then export it from Eclipse as mqttExerciser.apk, or use the pre-built sample app that is available as file mqttExerciser.apk in the \SDK\clients\android\samples\apks folder of the Mobile Messaging & M2M Client Pack.

Procedure. Creating a LAMP server (web server - Linux Apache Mysql PHP) on the Raspberry Pi - Linux tutorial from PenguinTutor. This provides details of how to configure a Raspberry Pi as a webserver. 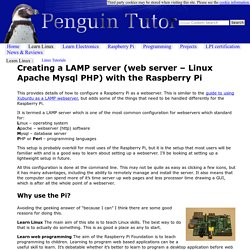 This is similar to the guide to using Xubuntu as a LAMP webserver, but adds some of the things that need to be handled differently for the Raspberry Pi. It is termed a LAMP server which is one of the most common configuration for webservers which standard for: Linux – operating system Apache – webserver (http) software Mysql – database server PHP or Perl – programming languages This setup is probably overkill for most uses of the Raspberry Pi, but it is the setup that most users will be familiar with and is a good way to learn about setting up a webserver. I’ll be looking at setting up a lightweight setup in future. All this configuration is done at the command line. Why use the Pi? Avoiding the geeking answer of “because I can” I think there are some good reasons for doing this. Raspberry Pi Guide - Projekte, How To's, Tipps, Zubehör.