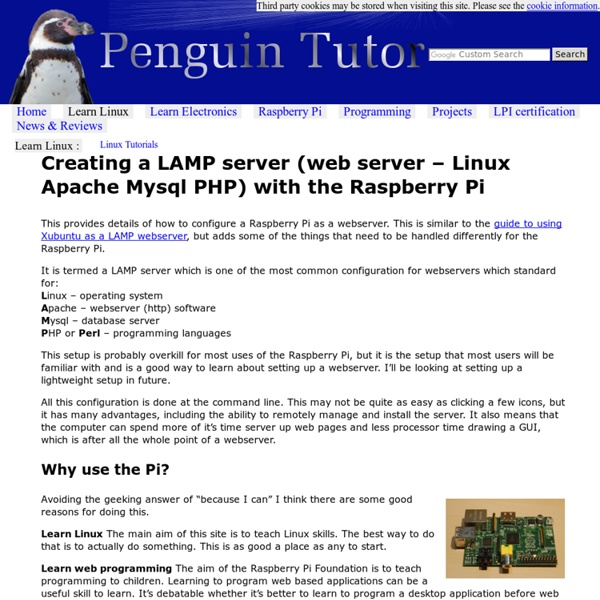 This provides details of how to configure a Raspberry Pi as a webserver. This is similar to the guide to using Xubuntu as a LAMP webserver, but adds some of the things that need to be handled differently for the Raspberry Pi. It is termed a LAMP server which is one of the most common configuration for webservers which standard for: Linux – operating system Apache – webserver (http) software Mysql – database server PHP or Perl – programming languages This setup is probably overkill for most uses of the Raspberry Pi, but it is the setup that most users will be familiar with and is a good way to learn about setting up a webserver. I’ll be looking at setting up a lightweight setup in future. All this configuration is done at the command line. Why use the Pi? Avoiding the geeking answer of “because I can” I think there are some good reasons for doing this. Learn Linux The main aim of this site is to teach Linux skills. Debian Linux Security passwd and follow the prompts for changing the password.

RPi Low-level peripherals Back to the Hub Hardware & Peripherals: Hardware - detailed information about the Raspberry Pi boards. How2SetUp a Raspberry Pi Windows file server - Simon The Pi Man Ok this instruction sheet will allow you to setup a Raspberry Pi computer to act as a (NAS)Network Addressed Storage server so it will be possible for you to access files from any/all your windows PC's in your house using the Raspberry Pi to share the files on a disk drive attached to one of the usb ports on the Raspberry Pi. 1. Firstly I need remote access to my pi so firstly carry out the How2SetUp Remote Access from the menu on the left. Lets connect to the Pi remotely using putty so we get the following screen.

Raspberry Pi micro arcade machine - End result Well, you've seen the end result at the beginning. Some more pictures: And a movie. You can see it happily running AdvanceMAME: So now, I'm going to totally play old-school games for hours on end... on a tiny 2.4" display... while I have something more powerful in my back pocket... wait, why did I build this again? « Prev 7 New Raspberry Pi development vm version 0.2 « Executing Gummiworms [update (11/3/12): This version is now out of date. Please use v0.8 the torrent of which is at The readme and the sha1 ] [update: There is a tiny little buglet in the vm that slipped passed me as it didn't crop up when I was testing that yum worked as I didn't install a library that needed to go in the top level of the rootfs. If you get a lot of errors about unpacking or mkdir... when trying to install something using yum then you'll need to do the following cd $HOME/raspberry_pi_development/f13arm_rootfs sudo chmod -R 777 *

R-Pi NAS Back to RPi Guides. Raspberry Pi Network Attached Storage This project configures your Raspberry Pi to share files with any other computer on your local network. GPS Display Device Here are some other old small projects. These are probably from my high school days. Some are from my university days. I’ve collected them all onto this one post when I moved my website. GPS Device Back in 2007 when smartphones were not popular yet, I managed to build this: Chris's Digital Realm IMPORTANT: You should no longer be using my kernels. The official kernels shipped with Raspbian now include versions of my I2C and SPI drivers and are much newer. I am also no longer involved in Raspberry Pi development. The rest of the page is being kept for historical reasons only. As I have been posting so often about kernels for the Raspberry Pi I thought I had best create a central page on my blog that people can link to and always get the latest version. 1.

RPi VerifiedPeripherals Back to the Hub Hardware & Peripherals: Hardware - detailed information about the Raspberry Pi boards. Chronodot RTC for Viobot » GregRob: Large Format Photography Chronodot RTC for Viobot Viobot is being designed to send output, such as the webcam stream back to a tablet or other network connected device. She is also going to take input suggestions on what to do/say from the same device. How to setup a mail server with Citadel on Raspberry Pi I decided to start a series of articles that explain how to go about setting up various types of servers using the Raspberry Pi as a base for the server infrastructure. Thus, this one is about setting the Raspberry Pi to be a mail server using Citadel. The first thing we need to understand in setting up a mail server are the protocols that need to be in place. The most basic mail server requires two protocols to function, one to retrieve e-mail (IMAP/POP3) and one to send and accept mail (SMTP). Usually these function operate as two different services.