ES6-WesBos. Local server · processing/p5.js Wiki. Some functionality (loading external files, for example) works as expected when the files are placed online via FTP or SSH. 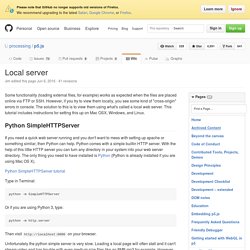 However, if you try to view them locally, you see some kind of "cross-origin" errors in console. The solution to this is to view them using what's called a local web server. This tutorial includes instructions for setting this up on Mac OSX, Windows, and Linux. Python SimpleHTTPServer If you need a quick web server running and you don't want to mess with setting up apache or something similar, then Python can help. Python SimpleHTTPServer tutorial Type in Terminal: python -m SimpleHTTPServer Or if you are using Python 3, type: python -m http.server Then visit on your browser. 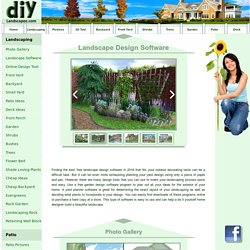 But it can be even more exhausting planning your yard design using only a piece of paper and pen. Wordpress support. Mobile first. Ssh. Vagrant.

Find the Absolute Path to a folder or directory in Mac OS X. Mac OS X doesn’t have an obvious way to view the exact text based path to a folder (otherwise known as a directory) in the finder window. 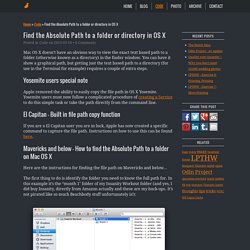 You can have it show a graphical path, but getting just the text based path to a directory (for use in the Terminal for example) requires a couple of extra steps. Yosemite users special note Apple removed the ability to easily copy the file path in OS X Yosemite. Yosemite users must now follow a complicated procedure of creating a Service to do this simple task or take the path directly from the command line. Moving folders in Finder without copying. Due to a issue with Safari crashing I had to perform an Archive & Install OS repair. 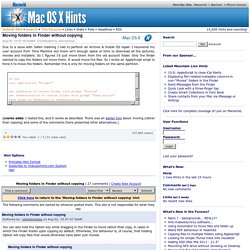 I recovered my user account from Time Machine but there isn't enough space or time to download all the pictures, movies and installers. So I figured I'd just move them from the old account folder. Only the finder wanted to copy the folders not move them. It would move the files. How to reset the $PATH on Mac? Hello everyone, Today I experienced a panic attack when I edited my path variable and removed all the content from the $PATH by mistake. 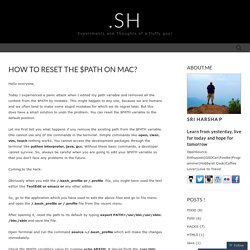 This might happen to any one, because we are humans and we often tend to make some stupid mistakes for which we do regret later. But this does have a small solution to undo the problem. You can reset the $PATH variable to the default position. An A-Z Index of the Apple OS X command line. Commands marked • are bash built-in commands. bash is the default shell, it runs under Darwin the open source core of OS X. 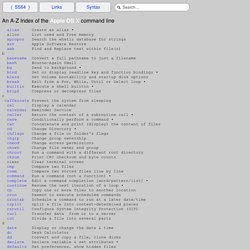 OS X Man Pages - Apple Developer ConnectionDiscussion forum Links to other Sites, Books etc... “Mac OS X is a rock-solid system that's beautifully designed. ▶ Master the command line: How to use man pages. If you’ve read Macworld for any length of time—particularly our OS X Hints blog or any other story that asks you to use Terminal—you may have wondered to yourself: How do you learn about all those mysterious commands, such as ls or cd? 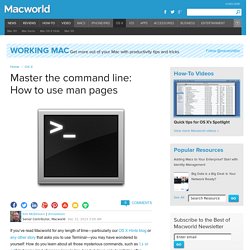 Is it some kind of arcane knowledge, handed down only to initiates after grueling initiations? Well, no. Actually, anyone can learn about Terminal commands, if they know where to look. Today, I’ll tell you where. Man up The key to Terminal wisdom is the man command. First, launch Terminal (in your /Applications/Utilities folder). Bash: about .bashrc, .bash_profile, .profile, /etc/profile, etc/bash.bashrc and others. Ever wondered what's the difference between ~/.bashrc, ~/.bash_profile, ~/.profile, /etc/profile, /etc/bash.bashrc (and maybe others) and what their purposes are? 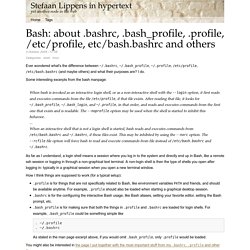 I do. Some interesting excerpts from the bash manpage: When bash is invoked as an interactive login shell, or as a non-interactive shell with the --login option, it first reads and executes commands from the file /etc/profile, if that file exists. After reading that file, it looks for ~/.bash_profile, ~/.bash_login, and ~/.profile, in that order, and reads and executes commands from the first one that exists and is readable. The --noprofile option may be used when the shell is started to inhibit this behavior. ... 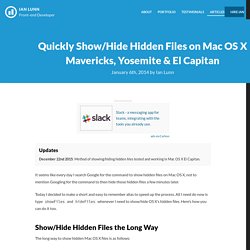