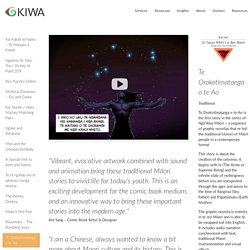 This is an exciting development for the comic book medium, and an innovative way to bring these important stories into the modern age.”Ant Sang – Comic Book Artist & Designer"I am a Chinese, always wanted to know a bit more about Maori culture and its history. This is very helpful on not only learn the story, but also the pronunciation of Maori. "Tony, Review on the App Store“Your commitment to the kaupapa and achieving te reo Māori outcomes for your iwi Māori communities has been an awesome highlight for me during our working relationship. 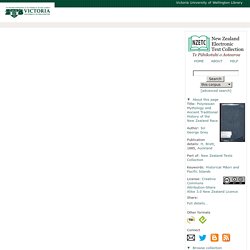 Ranging from Midway and Hawaii in the north to New Zealand in the south, the triangular area called Polynesia also includes Tahiti, Samoa, Tonga, Tuamotu, the Cook Islands, and the Pitcairn Islands. Although the mythology of Polynesia took different forms on various islands, many of the basic stories, themes, and deities were surprisingly similar throughout the region. Foundations of Religion and Myth. Scholars believe that humans first migrated to Polynesia from Southeast Asia about 2,000 years ago.

These people carried with them their mythological traditions about events, deities, and heroes. Polynesian religion and mythology placed great emphasis on nature, particularly the ocean environment. Because mana was sacred, Polynesians invented complicated rules to protect it. Origin of Yams deity god or goddess Major Gods and Characters. Polynesian explorers - Early explorers. The origins of Maori have been debated since Westerners first entered the Pacific Ocean. 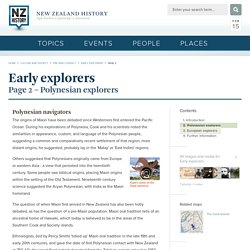 During his explorations of Polynesia, Cook and his scientists noted the similarities in appearance, custom, and language of the Polynesian people, suggesting a common and comparatively recent settlement of that region; more distant origins, he suggested, probably lay in the 'Malay' or 'East Indies' regions. Others suggested that Polynesians originally came from Europe or western Asia - a view that persisted into the twentieth century. DigitalNZ - Search results for maori myths. Search Te Ara. Maori Legends, Stories and Myths. Kupe and Te Wheke | He Ika A Maui | Maui and Tieke New Zealand's indigenous people came from tropical Polynesia more than 1000 years ago. 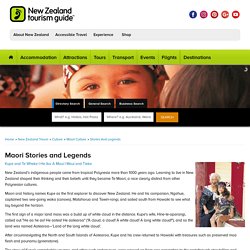 Learning to live in New Zealand shaped their thinking and their beliefs until they became Te Maori, a race clearly distinct from other Polynesian cultures. Maori oral history names Kupe as the first explorer to discover New Zealand. He and his companion, Ngahue, captained two sea-going waka (canoes), Matahorua and Tawiri-rangi, and sailed south from Hawaiki to see what lay beyond the horizon. The first sign of a major land mass was a build up of white cloud in the distance. The Legend of New Zealand. Māui - no ordinary man Māui is the gifted, clever demigod of Polynesian mythology responsible for fishing up the North Island of Aotearoa, New Zealand. 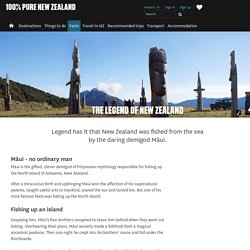 After a miraculous birth and upbringing Māui won the affection of his supernatural parents, taught useful arts to mankind, snared the sun and tamed fire. But one of his most famous feats was fishing up the North Island. Fishing up an island Despising him, Māui’s four brothers conspired to leave him behind when they went out fishing. It wasn't until the brothers were far out of sight of land and had filled the bottom of their canoe with fish that Māui revealed himself. The hook went deeper and deeper into the sea until Māui felt the hook had touched something. Māui cautioned his brothers to wait until he had appeased Tangaroa the god of the sea before they cut into the fish. Te Ika a Māui - Māui's fish To this day the North Island is known to Māori as Te Ika a Māui or Māui’s fish. 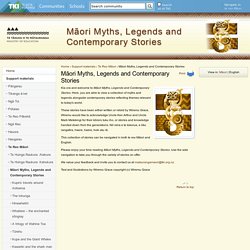 Here, you are able to view a collection of myths and legends alongside contemporary stories reflecting themes relevant to today's world. These stories have been either written or retold by Wiremu Grace. Wiremu would like to acknowledge Uncle Ken Arthur and Uncle Mark Metekingi for their kōrero tuku iho, or stories and knowledge handed down from the generations.