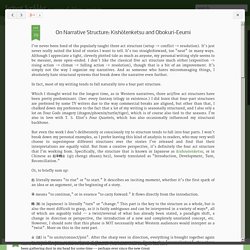 It's just never really suited the kind of stories I want to tell. It's too straightforward, too "neat" in many ways. Although I appreciate a tight, cleverly plotted tale as much as anyone, my personal writing style seems to be messier, more open-ended. I don't like the classical five act structure much either (exposition -> rising action -> climax -> falling action -> resolution), though that is a bit of an improvement.

It's simply not the way I organize my narratives. In fact, most of my writing tends to fall naturally into a four part structure. Which I thought weird for the longest time, as in Western narratives, three act/five act structures have been pretty predominant. But even the work I don't deliberately or consciously try to structure tends to fall into four parts. Robleto-cd.jpg (JPEG Image, 700 × 525 pixels) Wk1_narrative_structures.pdf. 5 Tips for Bringing Characters to Life « Flash Fiction Chronicles. By J. 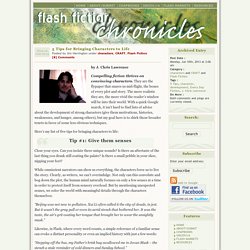 Chris Lawrence Compelling fiction thrives on convincing characters. They are the flypaper that snares us mid-flight, the bones of every plot and story. The more realistic they are, the more vivid the reader’s window will be into their world. With a quick Google search, it isn’t hard to find lists of advice about the development of strong characters (give them motivations, histories, weaknesses, and hunger, among others), but my goal here is to shirk those broader tenets in favor of some less obvious techniques. Here’s my list of five tips for bringing characters to life: Tip #1: Give them senses Close your eyes. While omniscient narrators can show us everything, the characters force us to live the story. The Fatal Flaw - The Most Essential Element for Bringing Characters to Life. By Dara Marks Growth is the by-product of a cycle that occurs in nature; that which flowers and fruits will also eventually wither and go to seed. 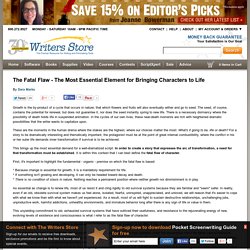 The seed, of course, contains the potential for renewal, but does not guarantee it, nor does the seed instantly spring to new life. There is a necessary dormancy where the possibility of death holds life in suspended animation. In the cycles of our own lives, these near-death moments are rich with heightened dramatic possibilities that the writer wants to capitalize upon. Inspiration for Writers, Inc.: Writing Tips- Character-Development- Bring Characters to Life. Character Development Bring Characters to Life Giving life to a character is one of the most rewarding parts of being a writer. 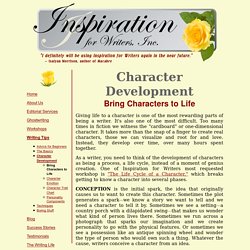 It's also one of the most difficult. Too many times in fiction we witness the "cardboard" or one-dimensional character. NaNo Prep: The Official NaNoWriMo Character Questionnaire. Want more preparation exercises? 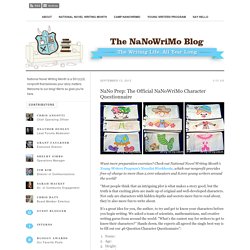 Check out National Novel Writing Month’s Young Writers Program’s Novelist Workbooks, which our nonprofit provides free-of-charge to more than 2,000 educators and 8,000 young writers around the world! “Most people think that an intriguing plot is what makes a story good, but the truth is that exciting plots are made up of original and well-developed characters. Not only are characters with hidden depths and secrets more fun to read about, they’re also more fun to write about. It’s a great idea for you, the author, to try and get to know your characters before you begin writing. We asked a team of scientists, mathematicians, and creative writing gurus from around the world: "What’s the easiest way for writers to get to know their characters?”

Name:Age:Height:Eye color:Physical appearance:Strange or unique physical attributes:Favorite clothing style/outfit:Where does he or she live? Photo courtesy of Artsy Fartsy Mama. No Plot? No Problem!: Five Secret Steps to Story Building. September is officially the start of NaNo Prep! 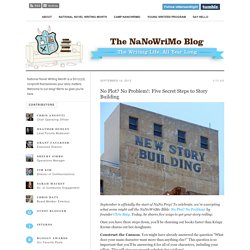 To celebrate, we’re excerpting what some might call the NaNoWriMo Bible: No Plot? No Problem! By founder Chris Baty. Today, he shares five ways to get your story roiling: Once you have these steps down, you’ll be churning out books faster than Krispy Kreme churns out hot doughnuts. Construct the Cannon. Whether it’s true love, sweet revenge, or a cupcake-filled swimming pool, a character’s greatest desire is the cannon that propels her toward her destiny. Build the mountain. Create conflict, suspense, and heart-wrenching drama by stacking a mountain of setbacks (fears, weaknesses, villains, spider monkeys) in front of your protagonist. Light the fuse. Plot the problems. Writers Don’t Cry. How Not to Write a Novel: 7 Things That Will Doom Your Novel.

There are a lot of ways not to do something. 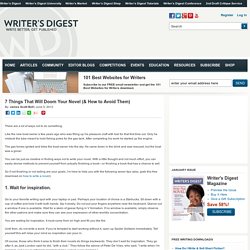 Like the new boat owner a few years ago who was filling up his pleasure craft with fuel for that first time out. Only he mistook the tube meant to hold fishing poles for the gas tank. After completing his work he started up the engine. The gas fumes ignited and blew the boat owner into the sky.