Naturalism: Self-Defeating, Unintelligible, and Ungrounded (Among Other Problems) Naturalism is self-defeating. 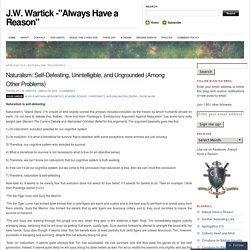 Naturalism’s “Grand Story” (I’m unsure of who exactly coined this phrase) includes evolution as the means by which humanity arrived on earth. I’m not here to debate that. Rather, I think that Alvin Plantinga’s “Evolutionary Argument Against Naturalism” has some fairly hefty weight (see Warrant The Current Debate and Warranted Christian Belief for this argument). The argument basically goes like this: Viewpoint: Why Naturalism Is Self-Refuting. Among the live options for worldviews on offer in modern times certainly one of the most popular among scientists, philosophers, and other academics is the view called naturalism. 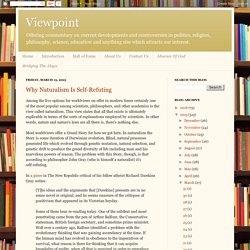 This view states that all that exists is ultimately explicable in terms of the sorts of explanations employed by scientists. In other words, nature and nature's laws are all there is, there's nothing else. Most worldviews offer a Grand Story for how we got here. In naturalism the Story is some iteration of Darwinian evolution. Blind, natural processes generated life which evolved through genetic mutation, natural selection, and genetic drift to produce the grand diversity of life including man and his marvelous powers of reason. Arguments from Reason. Thank you for your interest in Patheos newsletters! 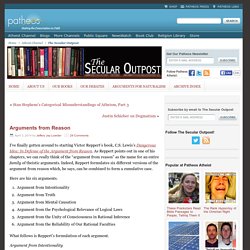 Please enter your email address below and click the "Subscribe" button. Thank you for your subscription. You can visit your Preference Center to complete your profile and see what else we have to offer. We apologize, we were unable to complete your subscription at this time, please try again later. If this error persists please contact us at communications@patheos.com. The Single Best Argument Against Philosophical Materialism? Browse > Home / Atheism / The Single Best Argument Against Philosophical Materialism? 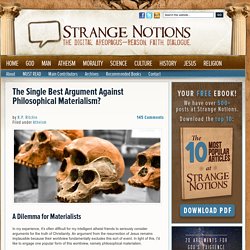 A Dilemma for Materialists In my experience, it's often difficult for my intelligent atheist friends to seriously consider arguments for the truth of Christianity. Naturalism is self-refuting. By Matt Slick Naturalism is self-refuting because it undermines the foundation for proper logical inference by restricting the human brain to operation within the properties of the physical laws, yet physical laws do not produce proper logical inference. 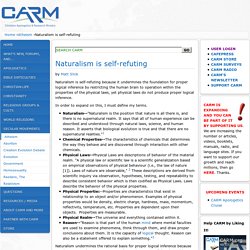 In order to expand on this, I must define my terms. The Argument from Consciousness Refuted. Many Christian philosophers (e.g., Richard Swinburne) advocate a theistic argument which has begun of late to garner considerable popularity in the literature. 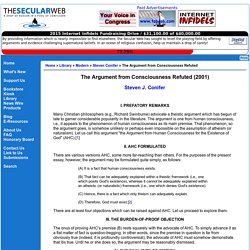 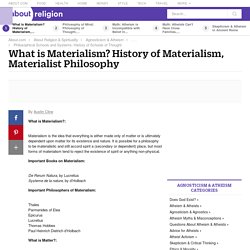 : Materialism is the idea that everything is either made only of matter or is ultimately dependent upon matter for its existence and nature. It is possible for a philosophy to be materialistic and still accord spirit a (secondary or dependent) place, but most forms of materialism tend to reject the existence of spirit or anything non-physical. Important Books on Materialism: De Rerum Natura, by LucretiusSysteme de la nature, by d’Holbach. Irreconcilable Differences: The Divorce of Materialism and Truth. According to many today, the advance of the natural physical sciences continues to shrink the “space” for God. 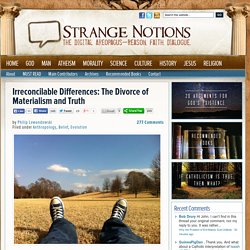 The “gaps” where someone can place God are decreasing, and therefore the “God hypothesis” will one day be swallowed whole by the progress of the scientific endeavor. Even more, the “space” where one could posit the human person as something more than just a complex, organized collection of matter and energy is said to have disappeared. While I find a materialist metaphysics very hard to coherently defend, I do find it interesting that an increasing amount of “secular” philosophers, who have no particular sympathy towards deism or theism, are beginning to question the assumption that materialism is true. Naturalism. 1. 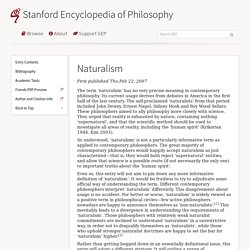 Ontological Naturalism 1.1 Making a Causal Difference The driving motivation for ontological naturalism is the need to explain how different kinds of things can make a causal difference to the spatiotemporal world. Thus many contemporary thinkers adopt a naturalist view of the mental realm because they think that otherwise we will be unable to explain how mental processes can causally influence non-mental processes. Similar considerations motivate naturalist views of the biological realm, the social realm, and so on. It may not be immediately obvious why this need to account for causal influence should impose any substantial ‘naturalist’ constraints on some category. However, there may be a posteriori objections to such non-natural spatiotemporal interventions, even if there are no a priori objections. Consciousness Remains an Intractable Problem for Naturalism. J.W. Wartick -"Always Have a Reason" 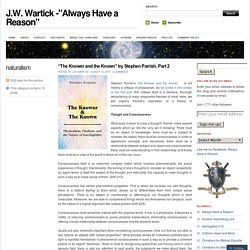 As we noted in the review of the first part, that critique itself is a decisive, thorough demolishing of major physicalist theories of mind. Here, we will explore Parrish’s exposition of a theory of consciousness. Thought and Consciousness What does it mean to have a thought? Failure of Atheism to Account for Rationality. By Matt Slick As a worldview, atheism is intellectually bankrupt and is wrought with philosophical problems. In this video, let's look at the inability for the atheistic worldview to account for rationality. Now, I've already done a lot on this topic on the carm website and in videos. Why Naturalism Is Self-Refuting. Csl_vs_naturalism.pdf. C.S. Lewis's Argument against Naturalism, part 1. The following series of posts are an adaptation of a thesis I wrote for one of my Master's degrees. ____________________ Introduction and Background. Is Scientism Self-Refuting. Dear Dr. Craig, How would you reply to this argument that scientism is not self-refuting: "Scientism has been always been successful in the past; any supernaturalistic explanations used by our progenitors have been replaced by naturalistic explanations.

Never has a supernaturalistic explanation superseded a naturalistic one. Arguments from Reason. Searle’s Biological Naturalism and the Argument from Consciousness. In recent years Robert Adams and Richard Swinburne have developed an argument for Gods existence from the reality of mental phenomena. Call this the argument from consciousness (AC). My purpose is to develop and defend AC and to use it as a rival paradigm to critique John Searle’s biological naturalism. The article is developed in three steps. First, two issues relevant to the epistemic task of adjudicating between rival scientific paradigms (basicality and naturalness) are clarified and illustrated. Second, I present a general version of AC and identify the premises most likely to come under attack by philosophical naturalists. In the last few decades, there has been an avalanche of activity in the epistemology of science.