Naturalism. Metaphysics of God (as One Infinite Eternal Substance) .. the ultimate reason of things must lie in a necessary substance, in which the differentiation of the changes only exists eminently as in their source; and this is what we call God. .. 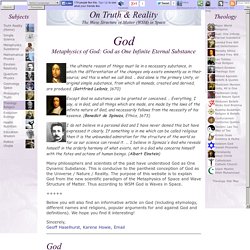 God alone is the primary Unity, or original simple substance, from which all monads, created and derived, are produced. (Gottfried Leibniz, 1670) Except God no substance can be granted or conceived. .. Everything, I say, is in God, and all things which are made, are made by the laws of the infinite nature of God, and necessarily follows from the necessity of his essence. (Benedict de Spinoza, Ethics, 1673) I do not believe in a personal God and I have never denied this but have expressed it clearly. Many philosophers and scientists of the past have understood God as One Dynamic Substance. Below you will also find an informative article on God (including etymology, different names and religions, popular arguments for and against God and definitions). 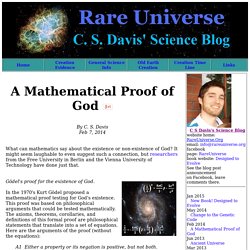 S. Davis Feb 7, 2014 What can mathematics say about the existence or non-existence of God? It might seem laughable to even suggest such a connection, but researchers from the Free University in Berlin and the Vienna University of Technology have done just that. Gödel's proof for the existence of God. A1 Either a property or its negation is positive, but not both. Each philosophical statement has a corresponding equation. The solution to Gödel's proof has been found using computers to solve the problem numerically. The researchers were able to use modern analytical tools to solve the equations, validating the logical consistency of the argument. While this may not constitute hard proof for God's existence, it does prove the logical consistency of belief in God that is so often challenged by athiests. Leibnizian Cosmological Arguments. 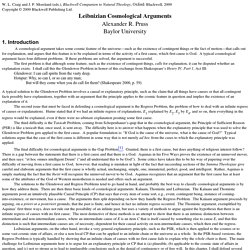 L. Craig and J. P. Moreland (eds.), Blackwell Companion to Natural Theology, : Blackwell, 2009 Copyright © 2009 Blackwell Publishing Ltd. Leibnizian Cosmological Arguments Alexander R. Baylor University A cosmological argument takes some cosmic feature of the universe—such as the existence of contingent things or the fact of motion—that calls out for explanation, and argues that this feature is to be explained in terms of the activity of a first cause, which first cause is God. The first problem is that although some feature, such as the existence of contingent things, calls for explanation, it can be disputed whether an explanation exists. Glendower: I can call spirits from the vasty deep. Hotspur: Why, so can I, or so can any man; But will they come when you do call for them? The second issue that must be faced in defending a cosmological argument is the Regress Problem, the problem of how to deal with an infinite regress of causes or expalanations.

. (5) This necessary being is God. Gordon Clark’s Argument From Truth. The following is from Ronald Nash’s intro to presuppositional apologetics, Faith and Reason. 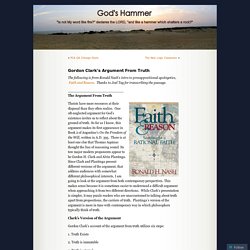 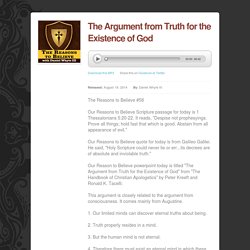 It reads, "Verily, verily, I say unto you, He that heareth my word, and believeth on him that sent me, hath everlasting life, and shall not come into condemnation; but is passed from death unto life. " Our Reasons to Believe quote for today is from Blaise Pascal. He said, "Either God exists, or he does not...Let us weigh the gain and the loss in betting that God exists...If you win, you win everything; if you lose, you lose nothing. Do not hesitate then, to gamble on His existence. " Our Reason to Believe powerpoint today is titled "The Problem of Evil" part 11 from "The Handbook of Christian Apologetics" by Peter Kreeft and Ronald K.

Peter Kreeft and Ronald K. Perhaps the clearest way to define our second crucial term, free will, is to contrast it with the philosophy that denies it. According to determinism, everything we do can be totally accounted for by two causes: heredity plus environment.