Arguments for God - Logic and Morality. Absolute Truth The first argument I want to address is often used by presuppositionalist Sye Ten Bruggencate. 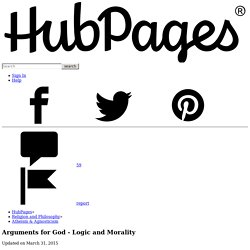 Simply stated it is the idea that logic and reason cannot be trusted without God because without God they have no firm or absolute foundation. When confronted with such an argument for the first time my initial reaction was, “What, why?”. Why do we need an absolute foundation to use reason and logic in our everyday lives? Essentially this remains my biggest objection. First things first. The Supernatural and the New Comparativism > The Religious Studies Project. How should we address anomalous experiences, especially those in our own time and culture? 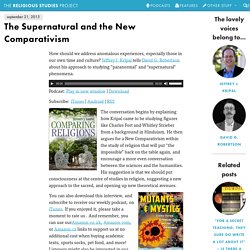 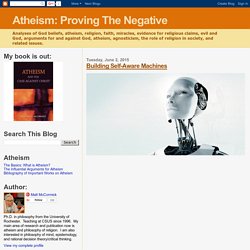 Increasingly, people fear the results of creating an intelligence whose abilities will far exceed our own, and who pursues goals that are not compatible with our own. See Nick Bostrom’s Superintelligence: Paths, Dangers, Strategies for a good summary of those arguments. I think resistance is a mistake (and futile) and I think we should be actively striving toward the construction of artificial intelligence. When we ask “Can a machine be conscious? SUMMA THEOLOGICA: The cause of evil (Prima Pars, Q. 49) Philosophical Explorations. Theological essay Phenomenology and Method: a discussion of phenomenological method in lue of empirical data validating religious beilef. Not So Fast: There is no Presumption of Atheism.

The One God - A Commentary on the First Part of St Thomas' Theological Summa - R. Garrigou-Lagrange,O.P. - Complete book online. Question 3. 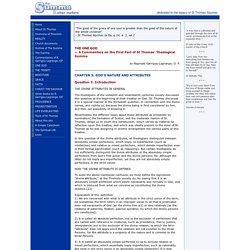 Introduction The theologians of the sixteenth and seventeenth centuries usually discussed this question at the beginning of their treatise on God. St. Thomas discusses it in a special manner in the thirteenth question, in connection with the divine names, and rightly so, because the divine being is first considered by him, and then our possibility of knowing it. "An Introduction to Philosophy for Young People" 3.pdf. PHILOSOPHY — Religion. Underlying any attempt to describe the nature of God is the recognition that such a being must be fundamentally different from ourselves. 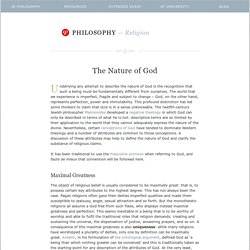 The world that we experience is imperfect, fragile and subject to change – God, on the other hand, represents perfection, power and immutability. This profound distinction has led some thinkers to claim that God is in a sense unknowable. The New Atheism and Five Arguments for God. It’s perhaps something of a surprise that almost none of the so-called New Atheists has anything to say about arguments for God’s existence. 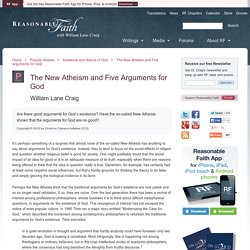 Instead, they to tend to focus on the social effects of religion and question whether religious belief is good for society. One might justifiably doubt that the social impact of an idea for good or ill is an adequate measure of its truth, especially when there are reasons being offered to think that the idea in question really is true. Darwinism, for example, has certainly had at least some negative social influences, but that’s hardly grounds for thinking the theory to be false and simply ignoring the biological evidence in its favor.

Perhaps the New Atheists think that the traditional arguments for God’s existence are now passé and so no longer need refutation. If so, they are naïve. In a quiet revolution in thought and argument that hardly anybody could have foreseen only two decades ago, God is making a comeback. 1. 1.1. 1.2. A. Anselm: Ontological Argument for the God’s Existence. One of the most fascinating arguments for the existence of an all-perfect God is the ontological argument. 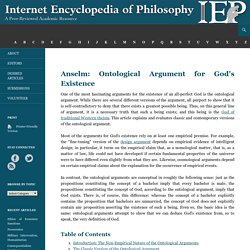 While there are several different versions of the argument, all purport to show that it is self-contradictory to deny that there exists a greatest possible being. Why are Most Scientists Atheists If There is Evidence for Belief in God? A larger percentage of scientists in the United Stated are atheists compared to that in the general population.

Do they disbelieve in the existence of God because of their intelligence, knowledge, and academic studies? A new study shows that disbelief is correlated with such mundane things as marital and family status and family of origin. Introduction In the early 20th century, studies showed that scientists were less likely than the general population to believe in the existence of God.1 A survey conducted in 1969 showed that 35% of scientists did not believe that God existed.2 In contrast, recent surveys on religious belief have shown that 90 percent of Americans believe in God and 40 percent attend a place of worship weekly.3 Is a lack of belief in God among scientists due to their higher intelligence and knowledge?

A recent study was designed to look at differences in belief among scientists (and other academics) and what factors influence those beliefs. Shenhav-Rand-Greene-JEPG11.pdf. The-origins-of-religious-disbelief.pdf. Two_dozen_or_so_theistic_arguments.pdf. Philosophical Explorations. The Incompleteness Theorem is Gödel’s main contribution to 20th century thought. 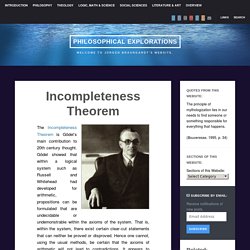 Gödel showed that within a logical system such as Russell and Whitehead had developed for arithmetic, propositions can be formulated that are undecidable or undemonstrable within the axioms of the system. That is, within the system, there exist certain clear-cut statements that can neither be proved or disproved. Hence one cannot, using the usual methods, be certain that the axioms of arithmetic will not lead to contradictions. Gödel's Incompleteness Theorem. AModalEpistemicArgumentForTheExistenceOfGod_3_ERutten.pdf. Possible Worlds. 1. 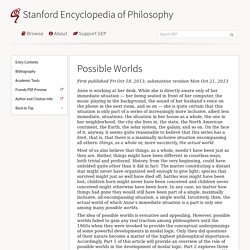 Possible Worlds and Modal Logic Although ‘possible world’ has been part of the philosophical lexicon at least since Leibniz, the notion became firmly entrenched in contemporary philosophy with the development of possible world semantics for the languages of modal logic. In addition to the usual Boolean sentence operators of classical logic such as ‘and’ (‘∧’), ‘or’ (‘∨’), ‘not’ (‘¬’), and ‘if...then’ (‘→’), these languages contain operators intended to represent the modal adverbs ‘necessarily’ (‘□’) and ‘possibly’ (‘◇’). Gödel's Incompleteness Theorem and God. Gödel’s Incompleteness Theorem: The #1 Mathematical Discovery of the 20th Century In 1931, Kurt Gödel delivered a devastating blow to the mathematicians of his time In 1931, the young mathematician Kurt Gödel made a landmark discovery, as powerful as anything Albert Einstein developed. Gödel’s discovery not only applied to mathematics but literally all branches of science, logic and human knowledge.

Modal Logic. 1. What is Modal Logic? Narrowly construed, modal logic studies reasoning that involves the use of the expressions ‘necessarily’ and ‘possibly’. However, the term ‘modal logic’ is used more broadly to cover a family of logics with similar rules and a variety of different symbols. Godel's Incompleteness Theorems - A Brief Introduction. Gödels Incompleteness Theorems - A Brief Introduction Over the course of its history, mathematics, as a field of endeavour, has increasingly distanced itself from its empirical roots to become an axiomatic science - i.e. a science whose objects of study are certain systems of mutually interrelated conceptual constructs, formally defined and delimited by means of axioms. This historical development of mathematics is intertwined with, and paralleled by, a change in the nature and role of axioms and axiomatization.

Originally understood as the articulation of self-evident, generally agreed-upon propositions pertaining to the external objects, phenomena and principles under study, axiomatization has evolved into the activity of structuring a field of knowledge as a purely deductive system whose objects of study are intellectual constructs fully defined by the propositions put forth as the axioms of the field. We can then state Gödel's two Incompleteness Theorems as follows: Bertrand Russell on Pragmatism, Power, and related issues. Bertrand Russell on Pragmatism, Power, and related issues. Pragmatism in a philosophical sense -- these are selections of comments of Russell about some philosophies of pragmatism, which sum up his core objections: The reality of what is independent of my own will is embodied, for philosophy, in the conception of 'truth'.

The truth of my beliefs, in the view of common sense, does not depend, in most cases, upon anything that I can do. It is true that if I believe I shall eat my breakfast tomorrow, my belief, if true, is so partly in virtue of my own future volitions; but if I believe that Caesar was murdered on the Ides of March, what makes my belief true lies wholly outside the power of my will. » “Top 10 Reasons To [Not] Be A Christian” Faith-killing questions from the trenches, and answers This story starts with my brother Bryan, a tough-questions seminary student.

He got a Masters degree in theology at a very conservative seminary where they work them real good, and he toed the line and he learned all the stuff that he’s supposed to learn, and he moved to China. Ifyoucanreadthis.pdf. Godel's Theorem. Here's a mathematical theorem I've been studying for several years now, and it may apply directly to what ex-WCG members are learning. You think there's a multiverse? Get real - opinion - 20 January 2015. What you need to know: videos about the Borde-Guth-Vilenkin theorem (BGV theorem) Kurt Gödel's Ontological Argument. Kurt Gödel is best known to mathematicians and the general public for his celebrated incompleteness theorems. A Refutation of Pragmatism - Answers For Hope. Pragmatic contradiction. Impractical Pragmatism. Articles. Some Problems with Pragmatism. Cloud Drive: Unlimited Storage - Backup Online. A Note on Holding Truth in Common.

The “no self-defeating object” argument. The_Lord_of_Non-Contradiction.pdf. A List Of Fallacious Arguments. The_Lord_of_Non-Contradiction.pdf. Is God Real? The Case from the Transcendent Laws of Logic. My criminal cases are largely circumstantial in nature. I seldom have eyewitnesses who can identify the suspect directly or tell me exactly how the killer committed the crime. Instead, I have to carefully build cumulative, circumstantial cases on the foundation of many interconnected pieces of indirect evidence. AModalEpistemicArgumentForTheExistenceOfGod_3_ERutten.pdf. Brilliant Math & Science Wiki. Brilliant Math & Science Wiki. SCEPCOP - Scientific Committee to Evaluate Pseudo-Skeptic Criticism of the Paranormal.

Atheism: Proving The Negative: Science is Essential to Morality. Introduction - Mathematical Monism. A Visual Sermon: thought-provoking, Bible-based, visually rich, and shareable without acknowledgement. A Friendly Question about God and Logic. 36 ARGUMENTS FOR THE EXISTENCE OF GOD. 20 Arguments For God's Existence. The Scientific Atheism Fallacy: How Science Declares that God Is Dead, But Can't Prove It. The Existence of God: Two New Proofs. What About Atrocities That Have Been Done in the Name of Religion. Quantum Mechanics for Beginners; A fun-filled introduction to Quantum Mechanics. A New Cosmological Argument. The Fallacy-a-Day PodcastThe Fallacy-a-Day Podcast. Modal Logic. Rebuttals to atheist arguments. Download Ebook Logic and Theism PDF EPUB AuDIObook. The Lord of Non-Contradiction. Fitch's Paradox of Knowability. Ezvid. Internet Encyclopedia of Philosophy. Aquinas and the Best of All Possible Worlds. Why atheism is self-defeating. GodEvidence.com.