Anatomy of Detroit’s Decline - Interactive Feature. Mayor Coleman A. Young of Detroit at an event in 1980. Richard Sheinwald/Associated Press The financial crisis facing Detroit was decades in the making, caused in part by a trail of missteps, suspected corruption and inaction. Here is a sampling of some city leaders who trimmed too little, too late and, rather than tackling problems head on, hoped that deep-rooted structural problems would turn out to be cyclical downturns. Charles E. Edward Jeffries, who served as mayor from 1940 to 1948, developed the Detroit Plan, which involved razing 100 blighted acres and preparing the land for redevelopment. Albert Cobo was considered a candidate of the wealthy and of the white during his tenure from 1950 to 1957. Coleman A. Kwame M. Dave Bing, a former professional basketball star, took office in 2009 pledging to solve Detroit’s fiscal problems, which by then were already overwhelming.

Related. Detroit, MI - Unemployment Rate. The Struggles of Detroit Ensnare Its Workers. Great Migration, The (1915-1960) Black Family Arrives in Chicago from the South, ca. 1919 Image Ownership: Public Domain The Great Migration was the mass movement of about five million southern blacks to the north and west between 1915 and 1960. 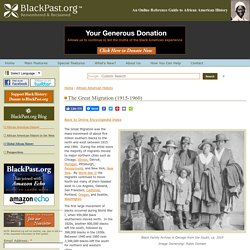 Detroit population rank is lowest since 1850. 5 Days in 1967 Still Shake Detroit. But other scars from the riots remain. 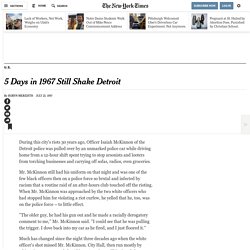 Hundreds of burned or looted businesses were never rebuilt. Tens of thousands of Detroiters moved to the suburbs, including many middle-class and affluent families. The city's tax base shrank and the quality of its schools declined. City officials have found it easier to fix a police force under their control than to repair the economic wounds left by the riots. Although public debate about the city's police force has largely disappeared, the struggle continues to rebuild what is also the nation's poorest big city. ''A lot has changed,'' said Detroit's Mayor, Dennis W. But the Mayor acknowledged that other problems persisted. Research paper. The Racist Housing Policy That Made Your Neighborhood - The Atlantic. Before you read this post, read Ta-Nehisi's Coates powerful case for reparations, our cover story this month. 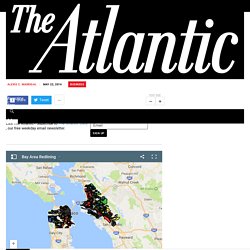 In it, TNC (as he is known around here) relentlessly demonstrates the "compounding moral debts" of discriminatory practices, especially around housing. One of the most heinous of these policies was introduced by the creation of the Federal Housing Administration in 1934, and lasted until 1968. Otherwise celebrated for making homeownership accessible to white people by guaranteeing their loans, the FHA explicitly refused to back loans to black people or even other people who lived near black people. As TNC puts it, "Redlining destroyed the possibility of investment wherever black people lived. " To understand the depth of the racism of these regulations, you have to read the descriptions of the grades that FHA gave to neighborhoods from A (green) to D (red).

TNC focuses in on North Lawndale, a neighborhood in Chicago, to make his point. Detroit-and-the-property-tax-full_0. Billions in Debt, Detroit Tumbles Into Insolvency - NYTimes.com. Cookies are Not Accepted - New York Times. Detroit just filed for bankruptcy. Here’s how it got there. By Brad Plumer By Brad Plumer July 18, 2013 On Thursday, the city of Detroit filed for bankruptcy — the largest city in the United States ever to do so. 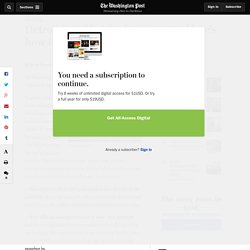 (Carlos Osorio/AP) To get a better sense of just how Detroit got into such dire financial straits, it's worth browsing through this May report on the city's finances and this "Proposal for Creditors" from June. Detroit's emergency manager Kevyn Orr laid out all the problems and economic headwinds facing the city. For instance: — Since 2000, Detroit's population has declined 26 percent. . — The official unemployment is now 18.6 percent, and fewer than half of the city's residents over the age of 16 are working. . — Low tax revenue, in turn, means that city services are suffering. . — High crime and blight are driving even more residents out of the city.